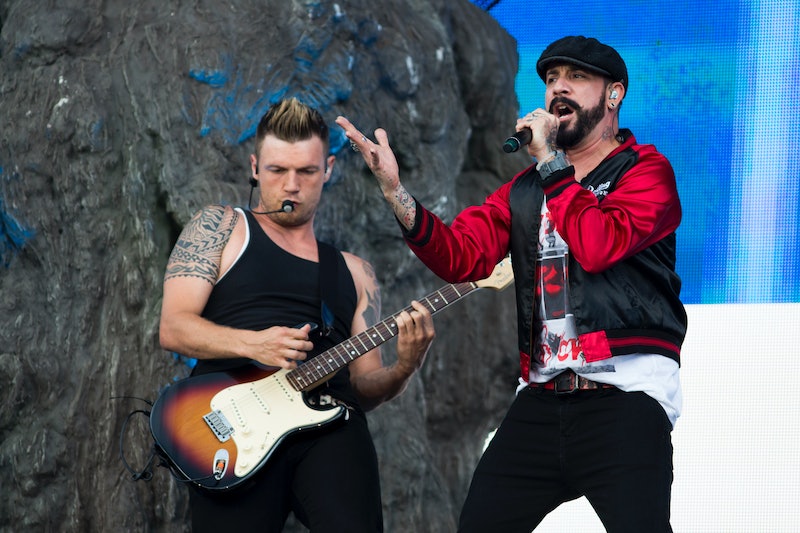 In the never ending battle for boy-band domination, one question has always remained: The Backstreet Boys or *NSYNC? I was always squarely in the Backstreet Boys camp. As a fourth grader, I was drawn in by their sexy and dangerous personas: A.J.'s had tattoos and a goatee — such a wild combination. Howie was quiet and mysterious. Nick was the heartbreaker. Brian has an angel's face but I knew he had some edge. And who could ever forget about Kevin's untamed eyebrows? They were bad boys and I was hooked. But I never realized just how bad they were: The Backstreet Boys had some secretly dirty lyrics.

The only reason my parents let me listen to such sexy bad boys is because they sang innocent pop-songs about puppy love and heartbreak or so we thought. Yeah, that's right. It turns out that Backstreet Boy songs are dirty. Really really dirty. Like Christina Aguilera during her "Stripped" era dirty.

Color me surprised. In my many years of road-trip sing-alongs and extensive curations of '90s playlists, I had completely failed to comprehend the overtly sexual undertones of their greatest hits. I was living in a fantasy world of naivety. Then one day it clicked. The "it" in their songs? It was sex. Everything in their music is about sex. My mind was blown.

Now that I know about the double entendres that exist in their music, the veil has been lifted — I now see and understand all.

The song was the easiest to figure out its hidden meaning. The "she" standing in front him is 100 percent not his girlfriend. His phone probably wasn't even dying! Everything in this song was lie. Shame on you Backstreet Boys for making such a catchy song about cheating.

Dirtiest Lyric: "Now two years gone, nothing's been won / I can't take it back what's done is done / One of her friends found out / That she wasn't my only one."

Looking back this one, it seems pretty obvious, but then again I was a pre-teen and it was simpler time. "It" could have meant a lot of things like going to the movies, roller-skating, holding hands but no, it means sex.

Dirtiest Lyric: "If you really like it hot / Find someone who hits the spot honey"

When I first listened to this song, I thought "rock your body" was referring to rocking your body back and forth because that is my signature dance move — flash forward a decade, they meant rock your body in a different way. Well played, Backstreet Boys.

Dirtiest Lyric: "Am I sexual? Yeah / Am I everything you need / You better rock your body now"

Dirtiest Lyric: "All the girls/ Get on your knees/Tryin’ to scream"

This was the age of the mature Backstreet Boys and by mature, I mean even more overtly sexual lyrics.

Dirtiest Lyric: "When we're lookin' to fool around / it's too late to stop me. / I know we're gonna get down"

It would seem that the Backstreet Boys were having a very dirty phrase in 2005. When they sing that a girl likes to party in the back seat they aren't talking about a road trip.

Dirtiest Lyric: "She likes to party in the back seat / under the bridge on the Brooklyn side."

This entire song is about getting it on with a groupie. I know for fact I never picked up on that detail.

Dirtiest Lyric: "But I should have known that I would be another victim of your sexuality"

Dirtiest Lyrics: "Just can't hold it back no more / Creepin' up and down now / It's time for me to let it go"

Most public display of affection involve hand holding and some light kissing, that is clearly not the case for the Backstreet Boys. For them, "PDA" means "getting it on in public."

Dirtiest Lyrics: "Remember at the beach we brought the sheets / We were harassed by police / Good thing we didn't go too deep"

Another day, another song about cheating from the Backstreet Boys. At least they are equal opportunity cheaters. This song is about a girl who's emotionally cheating with another guy — it's very deep and sexually charged.

Dirtiest Lyric: "Though I was sleeping in your bed / 'Cause someone else was on your mind / In your head"

In 2011, this song was banned in China. I haven't exactly figured out what makes this song particularly dirty but clearly the Chinese government knows something I do not. Then again, Bustle's own sex and relationships podcast shares a similar name, so maybe there's something to this...

Dirtiest Lyric: "You are my fire, the one desire"

Now this one involves some conjecture but hang in there with me. There is an old wives tale that if someone masturbates too much they will go blind. In this song he says he's gone blind and he can't stop thinking about the girl — there's a connection there.

Dirtiest Lyric: "And how you got me blind is still a mystery and I can't get you out of my head"

It is now obvious that I was not a very observant child. It is like The Backstreet Boys weren't even trying to hide their dirtiness. I will still enjoy there music but from this point forward it will be in a different way.

And if you don't believe that Backstreet Boys inspire sexytimes, check out Bustle's I Want It That Way for further proof.

More like this
22 Movies On Netflix That Are Perfect For The Whole Family
By Bustle Editors
Watch The Teaser For Amazon's Adaption Of The 1992 Film 'A League Of Their Own'
By Sabienna Bowman
Now That 'Renaissance' Is Here, Let’s Revisit Beyoncé’s First Solo Album From 2003
By Grace Wehniainen
Victoria Beckham Brought Posh Spice Back In A Very Rare Performance
By El Hunt
Get Even More From Bustle — Sign Up For The Newsletter