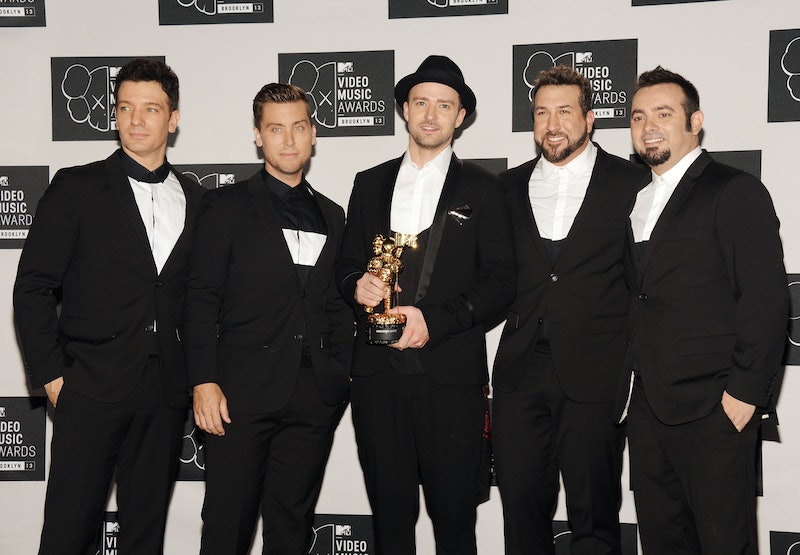 Back in the '90s and early 2000s, there was arguably no greater debate than that of which boy band reigned supreme — The Backstreet Boys or *NSYNC? Arguments ensued over whether Justin Timberlake's afro trumped AJ McLean's goatee, which group had the best breakup ballads, and could lead even the most passive of friends to tears and screaming matches. OK, I may be exaggerating a bit, but there was definitely some division between BSB and *NSYNC fans. Many of the groups' fanbase were also lead to believe that BSB and *NSYNC were embroiled in their own bitter rivalry and hated each other enough to engage in an Anchorman- style street fight. As it turns out, the alleged feud between the boy bands was nothing but hype. In fact, the members actually get along famously, with a few even collaborating on a SyFy zombie venture together — wait, WHAT?! Allow me to explain...

BSB member, AJ McLean, and *NSYNC veteran, Joey Fatone, were interviewed by TooFab on Friday, July 10, while attending Comic-Con 2015. The two were there to promote Nick Carter's new SyFy zombie western, Dead 7, which he invited Fatone to star in. Is that not the weirdest and most awesome thing you've heard all year?? Of course it is! During their interview, Fatone and McLean both took turns offering each other adorable accolades, and promptly shut down the age-old rumors of a feud.

"There was never any kind of rivalry," McLean said. "[Fatone] and I grew up in the same town together, Howie [Dorough] and Chris [Kirkpatrick] went to college together. The media just manifested and tried to force it." McLean even went on to note that *NSYNC made his wife swoon more than BSB. "[My wife] saw Pop Odyssey and the tour before that because she was like, 'I think they’re way better dancers than you guys.'"

Clearly, these two boy bands need to collaborate and perform in concert together — which would otherwise be known as the best show anyone would ever be lucky enough to witness. Without further adieu, let's look at the reasons BSB and *NSYNC need to start planning a reunion tour ASAP in order to make all our respective hearts explode.

They Both Have Killer Dance Moves

Stop pretending like you forgot the choreography from "Bye Bye Bye." We all still bust out those moves when no one is looking.

BSB Has Experience With Reunion Tours

Remember back in 2010 when BSB and New Kids On The Block joined forces for the NKOTBSB tour?! Clearly, BSB must be itching for another boy band collaboration at this point.

It may have been brief, but we still enjoyed every second of *NSYNC's "surprise" stint during the 2013 MTV Video Music Awards in the middle of Justin Timberlake's mini concert. Clearly, all the members are still very in sync (ha ha) with each other and need to get the band back together immediately.

For one glorious period, we could all go back to donning our chokers, sparkly tube tops, and slap bracelets with a boy band reunion tour as our excuse. I MISS MY YOUTH!

The Songs Will Never Get Old

True story: "I Want It That Way" was played at a bar/face-painting-toga-party (yes, that's a thing) I went to a couple months back and every. Single. Person. LOST IT. Similarly, "I Want You Back" came on the radio while I was driving home last week and I cried tears of joy. OK, I didn't actually cry, but I did scream, "OMG! YAASSS! EVERYTHING IN LIFE IS GOOD NOW!" to no one in particular. These songs need to continue to be performed until the end of time.

We All Want A Reunion Tour To Happen

I don't think I even need to explain this one — I'm just stating facts at this point. Now I'm just going to sit back and wait for BSB and *NSYNC to make all my dreams come true.