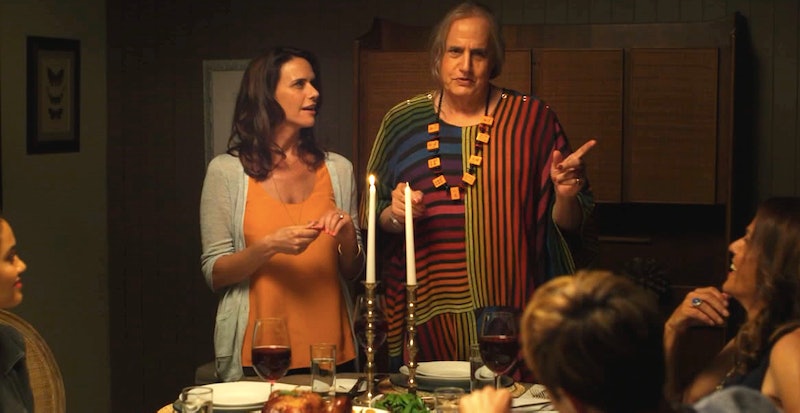 It's hard out there for a comedy that's not Modern Family, as we've seen year after year at the Emmys. The ABC comedy has a stronghold on the Best Comedy category, so much so that I've trained myself to not hope for any other comedy — no matter how worthy — to take home the trophy. And when Veep won the best comedy Emmy, it stung a little (not too much though, because Veep is also amazing). Despite the steep competition in the category, I think most fans of comedy and complex storytelling can agree that Transparent deserved the Emmy, though. Not only was this series traversing new territory for a series (I supposed we can't really call it TV, since it's an Amazon Original, but still), but the creator and writers just did it so damn well.

For the uninitiated, Transparent follows the story of Maura Pfefferman (Jeffrey Tambor) as she comes out as transgender to her family. Maura gives herself a new parental moniker — Moppa — and proceeds to live her new life with her family at her side. But the drama doesn't just center around Tambor's Maura — the entire cast is filled out with complex characters, following their own storylines as Maura follows hers.

And the cast handing these intertwining storylines is absolutely phenomenal. Gaby Hoffman, Carrie Brownstein, Amy Landecker, Jay Duplass (brother to Mark), Judith Light, and Rob Huebel are just a small fraction of the actors who make this show incredible. And the ease with which the entire ensemble achieved familial chemistry in a short pilot season is admirable all on its own.

Beyond the work the show is doing to shed light on the experience of a transgender woman coming out to her family and after we consider the fact that the entire cast is killing it, there's also the fact that the showrunner and director, Jill Soloway, is a woman in a television landscape where women aren't so plentiful behind the camera.

Transparent winning something as big at the Best Comedy Emmy would signal that the Television Academy supports television made by women in a big way, not to mention that they support the diverse storytelling the Amazon series has brought to the game. Luckily, the series won both directing and best actor awards and at the end of the day though, if Transparent had to lose someone, I'm OK with it being Veep.