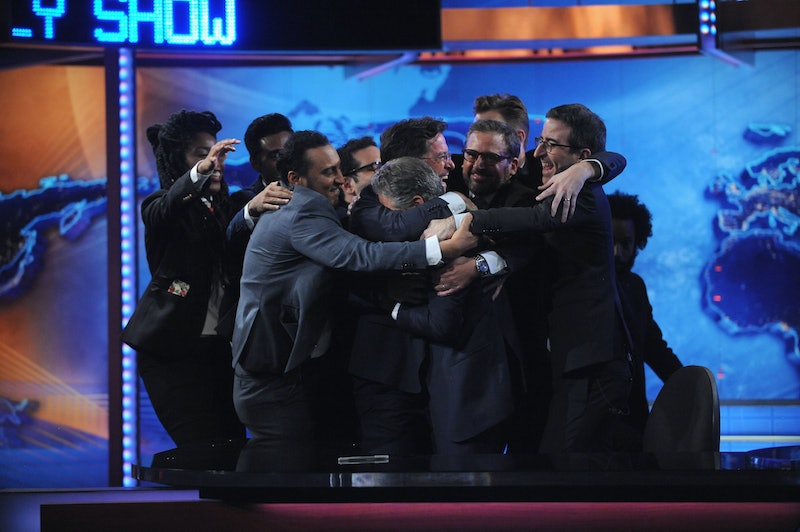 The debate over whether this is really a golden age of women in television now has some discouraging statistics; a study by the Women's Media Center revealed that women are underrepresented in Emmy categories in writing, directing, editing, and producing. In the past 10 years, only 2,074 women have been nominated in those categories, while 7,485 men have been nominated. That's 78 percent male domination in those fields. In fact, for this Sunday's Emmy awards, only 25 percent of women are dominated in those particular categories.

While it appears to be a great (well, comparatively great) moment for women on TV, this behind-the-scenes disparity is a bad sign for diversity. The WMC links the lack of nominations to a lack of women in these positions in general; they are not recognized because they are underrepresented in the field, as demonstrated by another study that revealed that, on primetime television, women only account for 26 percent of executive producers, 38 percent of producers, 26 percent of writers, 14 percent of directors, and 21 percent of editors.

How useful is it to have women on TV when so few of them are crafting what those women actually do? WOC president Julie Burton spoke of the way that diversity is important in all levels of media: "These are key behind-the-scenes roles, and the men and women in these roles have the power to decide and mold what the story is, who is in the story, and how the story is told. This is crucial to making sure women’s experiences, perspectives, voices, and images are part of any story." Even if you see this as a golden age for women on television, these statistics reveal how much room for improvement there still is.

Unfortunately, it isn't incredibly surprising. While Late Night with Stephen Colbert debuted to much praise and excitement, Splitsider revealed that the writing staff of 19 only included two women, and no people of color. Actor Matt Damon is currently embroiled in controversy after he expressed views that diversity should happen on-camera, not behind the camera, and "Damonsplained" diversity to a woman of color bringing up her justifiable concerns. And then there was that Vanity Fair photo shoot of all the late night hosts, which acknowledged the boys' club with a wink but didn't do anything to challenge it.

I shouldn't have to say that diversity in media is not a joke. The media shapes how we see the world, and that view of the world should not be framed solely by white men. It is not only important to have faces that represent us on screen but behind-the-scenes as well. Having a female lead does not automatically make a show feminist, and, while there's no one way to be a feminist character, seeming like a real person, rather than a fantasy or caricature, is a good start.

While, yes, Matt Damon, there are men out there who can create complex, realistic female characters, and women who can create empty ones, why wouldn't you have an equal amount of women behind-the-scenes to ensure diversity of perspective and life experience? It's important to celebrate those Emmy nominations that are victories for diversity, but it's also important to consider how much of a meritocracy this award system can be when men make up over three-quarters of those nominated. When the pool is already unfair, how fairly can it be judged?