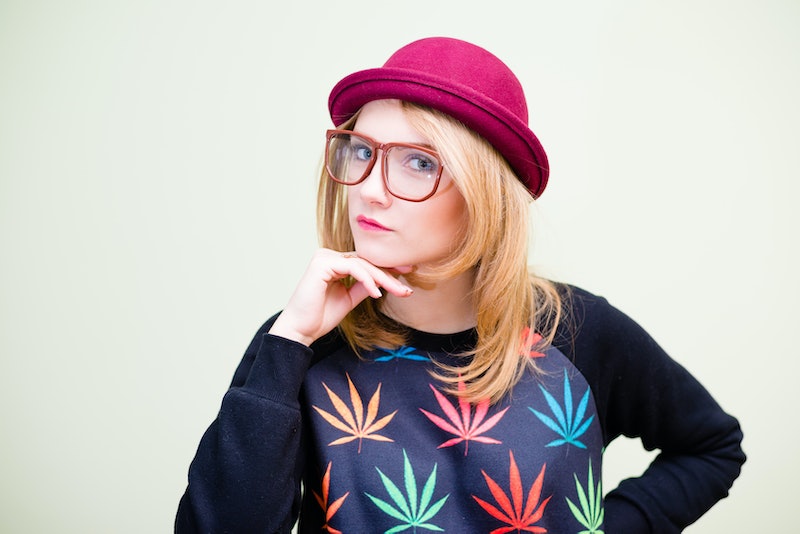 Why in the world would anybody in their right mind want to get involved with a sarcastic woman? I mean, dating a sarcastic woman would be like choosing to spend time with someone who was highly intelligent, sexy as hell, hilarious, and had an unique point of view. Who wants that? Run the other way if you come into contact with someone sarcastic as you don't know if sarcasm is some kind of verbal disease that not only is contagious, but prone to painful outbursts.

Sarcastic women or men aren't for everybody, and many people don't understand the sarcastic's often dry and/or biting sense of humor. Many people can take a sarcastic person's barbed comments way too personally and manage to feel insulted and hurt at the same time. They can't see past the sarcasm to the sensitivity, caring, and intelligence underneath.

The appreciation of sarcasm and sarcastic people can be developed or something that you're born with. My father could be sarcastic, so it's a trait that I inherited. I also saw what sarcasm can do, like elicit big laughs and I wanted in. I worked at my sarcasm, and had many sarcastic friends — sarcasm is definitely something that binds people together.

Many people aren't fluent in sarcasm and it can scare them. Since sarcasm is often misinterpreted as mean, hostile, or hateful,it may surprise you to learn that there are many benefits to dating a sarcastic woman.

If I said to my boyfriend, "No, you absolutely should wear that shirt to the wedding just in case there's a shortage of waiters and you need to fill in." He'd have to use his brain power to figure out that I meant, "Under no circumstances wear that shirt." Deciphering sarcasm takes a certain amount of smarts and knowing how to respond without anyone getting upset, also takes brain power.

2. You'll Get A Tougher Skin

By dating a sarcastic person, you'll get a tougher skin, and this is going to help you in life. For every promotion you don't get or every comment some mean internet troll says, you'll be able to laugh it off and roll on with your bad sarcastic-handling self.

By dating a sarcastic person, you'll become funnier almost by osmosis. You know those immersion programs, where armed with only some high school French, you go off to live with a family in France? They don't speak any English, and face it, you don't really speak any French, but six weeks later you are bonjouring and ordering a nine course meal all in French. With the sarcasm immersion dating program, you learn how to say "Nice shoes, did your grandma buy those for you?" and actually mean, "Jeez, you're hot."

4. Your Creativity Will Go Off The Charts

Sarcasm is a brain workout, and the more your brain works, the more creative it gets. By figuring out that the sarcastic thing your almost- significant other just said was funny, not a declaration of war, you are problem solving, thinking outside the box, and seeing things from an alternative point of view.

5. You'll Discover How Sarcasm Can Make Almost Everything Better

Have you ever been in at a function or event that was either so tense or so awkward, you prayed that almost anything would happen so that you could get through it? Sarcasm to the rescue. Humor can de-tense a depressing situation, and it can inject a little levity to the proceedings. Being with someone who can dish out the sarcasm is like being with an emotional superhero-you'd be surprised how often they save the day.

Nothing is sexier than someone who can make us laugh and be brilliant on top of it. We gravitate to sarcastic people and want them to like us.

7. Sarcasm Will Become Your Cherry on The Ice Cream Sundae of Your Social Situations

People are naturally attracted to those with sharp senses of humor, and those with the ability to see humor in random situations, so don't be surprised if your sarcastic woman is often the center of attention at parties and social events.

8. You'll Learn How To Use Sarcasm As A Defense Mechanism

Sarcastic people are actually surprisingly sweet underneath that candy coating of sarcasm, they're just extremely vulnerable and afraid of too many people seeing their soft centers.

It's been said that people with the sarcastic gene are human lie-detectors, so don't even try to lie to the Truth Whisperer. It will become easier just to tell the truth and you'll feel better not having to keep track of a bunch of lies.

Sarcasm is the language of love, and once you understand the ways of its negative flirting and biting humor, you'll be able to decipher that "Yuck, you suck, " really means, "I love you, you big idiot."