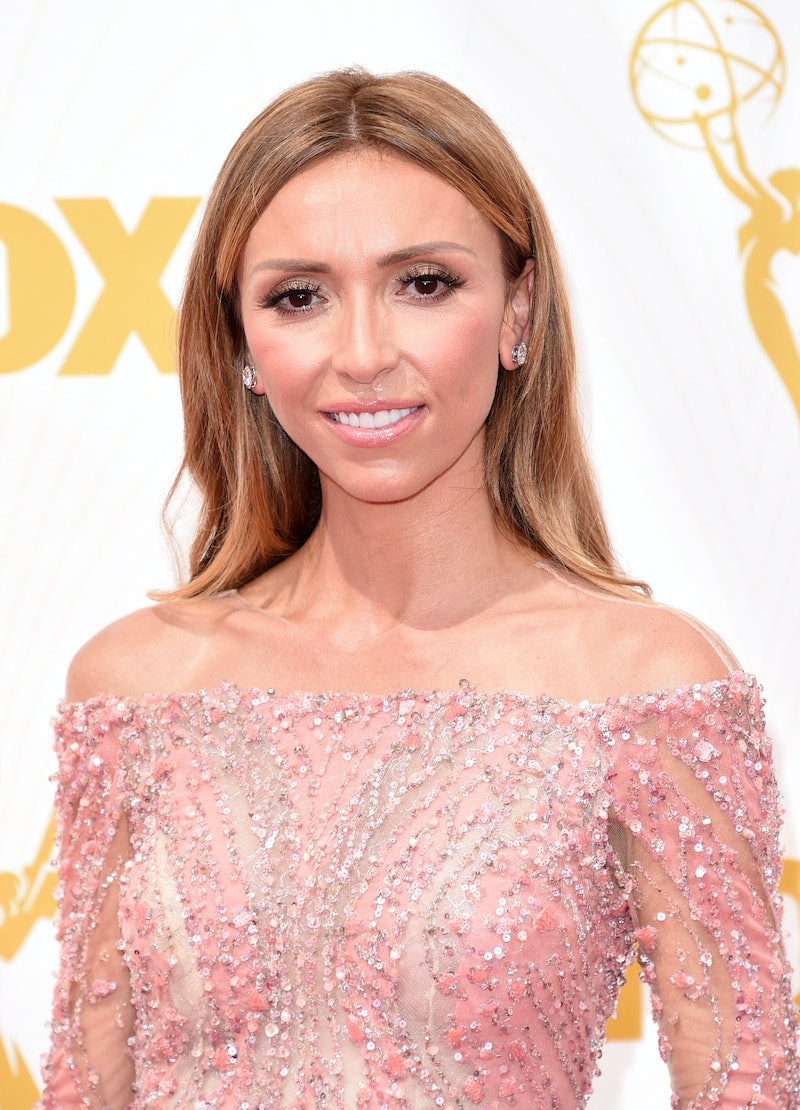 On the red carpet, women are often asked about beauty routines, diets, and the state of their uteri, so during the 2014 awards season, The Representation Project created the #AskHerMore campaign. You see, men get asked all sorts of interview questions on the red carpet about their roles and careers, but women are often left with questions about what they're wearing. During the 2015 Emmy Awards on Sunday night, Ryan Seacrest did his part to ask great questions to female nominees, but Giuliana Rancic must have missed the #AskHerMore memo. As one example, her interview with Top Chef host Padma Lakshmi was totally awkward.

No sooner did Lakshmi get on the E! stage did Rancic start with the cliché questions. She immediately brought up the host's appearance, asking the Emmy winner, "So tell me, you are in your forties now, and you have never looked better. A lot of women watch you, a lot of women want to know what are some of your tips for looking great and just glowing all the time?"

Lakshmi, ever the professional, answered Rancic’s question with aplomb, but you could tell she was a little annoyed with the line of questioning. She effortlessly answered something about the biggest tip being “happiness” because “nothing looks more beautiful than a smile,” and then went on to say, “good food, good friends, happiness, and contentment are the best things on your face."

The Bravo star handled things a lot better than I would have, because I think it’s annoying and belittling that Rancic focuses so much on appearance for her red carpet interviews. The people that grace the E! camera are award winners, actresses, mothers, daughters, singers, dancers, the most entertaining people in the universe, and all Rancic can ask about is where they get their facials done.

Lakshmi wasn’t the only one who got this type of question from Rancic. The Fashion Police star and Allison Janney talked about not eating bread and Joanne Froggatt was asked if the temperature affected her outfit choice. Rancic tried, sort of, to prod Mayim Bialik into a conversation about women in comedy, asking if the number of nominees this year says something about women in comedy.

Viewers at home noticed Rancic’s line of questioning, too:

Hopefully, the host will get the memo by the next red carpet — though it’s fun and fine to dress up and talk about designer clothes, women are more than their outsides, and it would be interesting to actually hear about their projects and lives instead of the dreaded, “Who are you wearing?”

More like this
How Lady Gaga & Adele Are Closer To The EGOT All Of A Sudden
By Jake Viswanath
It’s Official: 'The Bachelorette' Is No Longer A Fairy Tale
By Samantha Allen
All The Celebrity Relatives Revealed On 'Claim To Fame' So Far
By Brad Witter
Pete Davidson Runs To Shower With Kim K In 'The Kardashians' Season 2 Trailer
By Jake Viswanath
Get Even More From Bustle — Sign Up For The Newsletter