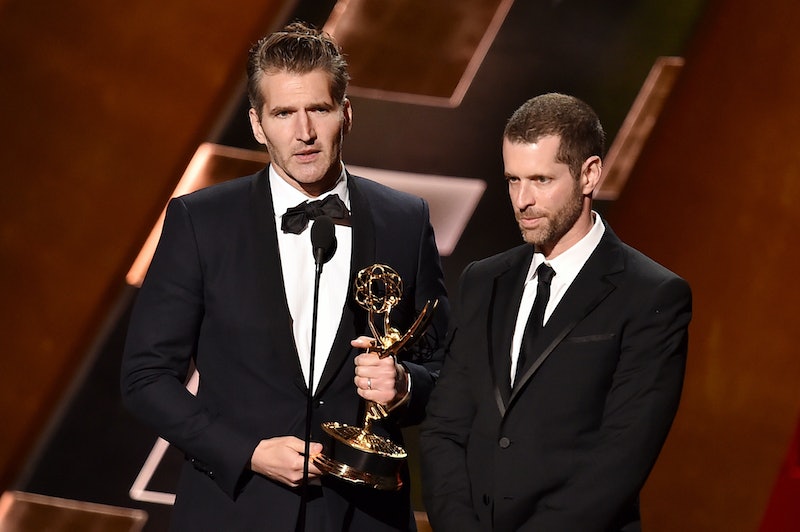 Winter may be coming, but winning is already here! In a rather shocking twist on Sunday evening, Game of Thrones writers David Benioff & D.B. Weiss won their first Emmy for Outstanding Writing in a Drama Series, upsurging Mad Men from what I was sure would be theirs. Not because Game of Thrones is bad show, of course. I, myself, obsess over and praise its very name on a daily basis. But given that this year marks Mad Men's final Emmys return, I figured the statuette would belong to them. However, to be honest, it's not really shocking to see the GoT writers nab a Emmy win. Instead, it's even more shocking that this is the first win they've ever received. Believe it or not, this marks both Benioff & Weiss' fourth Writing Drama nomination and ninth nomination total, and yet this is the first time they've actually won. Isn't that just nuts?

It's no secret that Game of Thrones has become an institution, not just for an HBO show, but in regards to all television shows worldwide. So, to think of how little it's been recognized, especially on a prestigious awards show like the Emmys is almost too crazy to believe. But given that this show has made me believe some crazy things over the years (cue all the Jon Snow lineage theories), I'm willing to accept this injustice and face value and just revel in the fact that this unfair tradition is finally broken.

Now the only remaining question is: Will this win be indicator that Game of Thrones will one-up Mad Men in the Outstanding Drama Series category? I suppose only time will tell, but given GoT's winning streak at the Emmys this year, I'd say the odds are looking to be very much in their favor.

More like this
How Lady Gaga & Adele Are Closer To The EGOT All Of A Sudden
By Jake Viswanath
Gwendoline Christie’s Partner Is Part Of Royal Family History
By Parry Ernsberger and Sophie McEvoy
Everything To Know About 'Evil' Season 4
By Meguire Hennes
Does 'Locke & Key’s Ending Mean There Could Be A Season 4?
By Sophia Moore
Get Even More From Bustle — Sign Up For The Newsletter