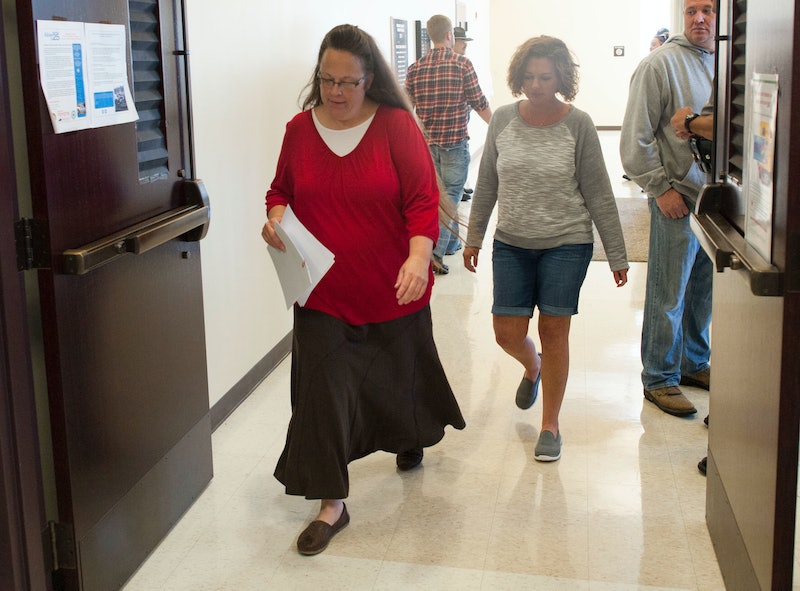 It's been a week since Kim Davis, the Kentucky county clerk who was thrown in jail for refusing to issue marriage licenses to same-sex couples, returned to work in rural Rowan County last Monday. She had publicly promised not to prevent her deputies from issuing the licenses, as long as she did not have to issue them and they did not bear her name. But already one deputy is worried that Davis is allowing invalid marriage licenses to be issued by her office, a move that could land her back in trouble with the courts.

On Friday, a lawyer for one of Davis' deputy clerks, Brian Mason, issued an update report to a federal judge that raised suspicion about how Davis was balancing her job with her religious beliefs. According to the lawyer, Richard Hughes, Davis replaced the old marriage license forms with forms that don't carry her name, the name of the county, or any reference to a clerk or deputy clerk. Instead, the new forms require deputy clerks like Mason to initial the licenses as a notary public.

The new forms may make Davis feel better, but they have Mason and local same-sex couples worried. The new forms are different from the forms that Mason and the other deputy and court clerks issued while Davis was in jail for contempt of court. Those forms simply stated the name of the county in the spot where her name should have appeared. The judge involved in the case, David Bunning, had no problem with those changes, suggesting that the licenses Mason issued while Davis was in jail are indeed valid.

The problem, then, arises in the differences between the new and original forms. According to Kentucky law, the marriage license form "shall be uniform throughout this state." The law goes on to state that each blank should be filled out uniformly as well. If Bunning approved the use of the county's name instead of Davis' name, then that might be an exception to the rule. Even in that case, though, the form remains uniform — it's just the way it was filled out that was different in Davis' absence. It seems unlikely that the use of a completely different form — one that requires a notary public rather than a clerk — would constitute a valid marriage license, then, especially if such a change was not approved by a judge in advance.

If the licenses are indeed invalid, Davis would be going back on her word and violating Bunning's order. Bunning ordered Davis to refrain from interfering with her clerks' ability to issue licenses to all legally eligible couples. If Bunning does not approve of the new forms that Davis is using, then he could find her in contempt of court once again for violating a court order.

In addition to these potential legal troubles, Davis is being sued by at least one gay couple. The ACLU attorneys bringing the case on behalf of the couple agree with Mason's lawyer that the new forms are problematic. It doesn't seem the controversy around this issue will end any time soon.