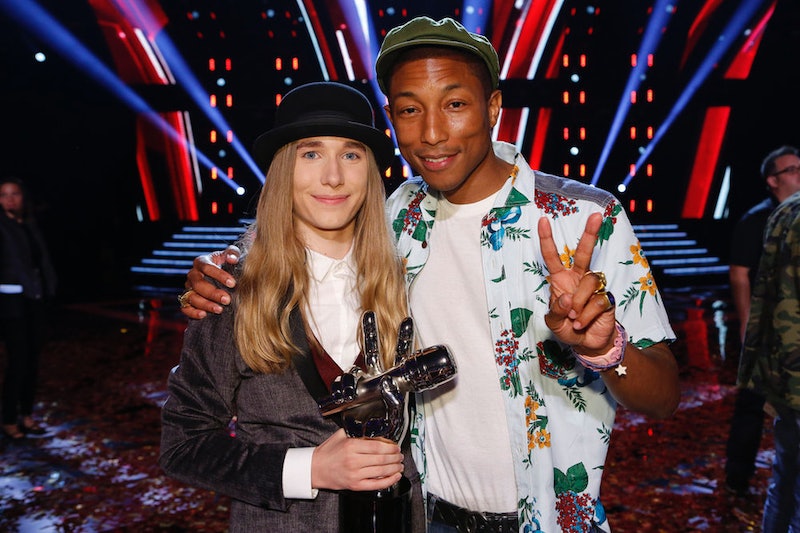 Back in the spring of 2015, The Voice Season 8 winner Sawyer Fredericks captured the hearts (and votes) of fans. The 16-year-old was the youngest singer to win the honor in the vocal competition show's history and he was the first winner coached by Pharrell Williams. So, what's Sawyer Fredericks up to now? Well, the long-haired Upstate New York native is still singing up a storm and splitting time between his family's farm and working on his own music in the studio in Los Angeles — along with performing with former Voice co-stars Mia Z and Meghan Linsey.

At a press event for The Voice's upcoming Season 9, coach Pharrell Williams revealed that he's working with — or at least has been in the studio with his former team member a bit. The singer and producer has been impressed with the mature work Fredericks has done so far.

When we first heard Sawyer, I thought he was going to be like old, 50-60 year old man who'd been singing the blues for years and years. And he was 15 years old, a white boy with long hair from Upstate New York. There was no way to really wrap your head around it. So much so that every time he sang, you just stare at him like whoa. And, now in the studio with him, the kind of songs that he's written, it's like man, is everything OK? He's so clear."

While there's no set release date for a Fredericks debut album just yet, he has been busy working on lots of other stuff, too.

1. Chilling On The Farm

Fredericks' family operates the 88-acre Windrake Farm in Fultonville, New York, which has chickens, cows, dogs, donkeys, and sometimes pigs, too. According to his social media accounts, he's been able to spend a good amount of the summer at home on his beloved farm.

2. Working In The Studio

Fredericks has returned to Los Angeles to record music at Revolver Recording Studio with several different band members and co-writers, according to his Instagram account. Last month, he posted the above video with a sample of a new tune by him — featuring his amazing voice, of course.

But, you won't have to wait long to hear new music from Fredericks! He recorded a song for the soundtrack of The Magic Strings of Frankie Pesto , a new book (yes, book) by bestselling author Mitch Albom (Tuesdays With Morrie). Both the soundtrack and the novel are available for pre-order and will be on sale in November.

4. Performing With Mia Z In NYC

5. Meeting Up With Meghan Linsey in Nashville

In October, Fredericks will head South to Tennessee to reunite with Voice Season 8 finalist Meghan Linsey for a concert at City Winery in Nashville, the home of country music.

Even while he's home, Sawyer has been performing. He treated fans to summer concerts at the New York State Fair and Fonda Fair. Earlier this month, he also played at an event to benefit St. Jude's in Saratoga Springs.

Sounds like it's been quite a summer for The Voice champ!