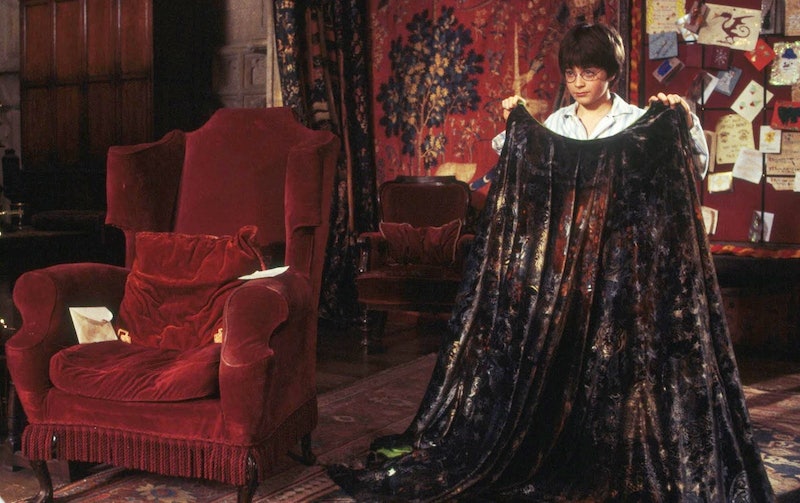 All of your Harry Potter dreams are about to be realized, folks (OK, maybe not ALL of them: As far as I am aware, J.K. Rowling is not planning to bring Fred Weasley back from the dead). Scientists are making an invisibility cloak (Yes, an INVISIBILITY CLOAK), and if they succeed, it has the potential to do a lot more than let you browse the restricted section of the library undetected. Although an actual invisibility cloak is not yet a reality, scholars at the Lawrence Berkeley National Laboratory at the University of California, Berkeley have succeeded in making an flexible, ultra-thin material that can change the way we perceive an object’s shape, and make objects invisible in certain wavelengths of light. So far it has only be used to mask very small objects, but researchers think it could eventually be scaled to use on much larger items.

This isn’t the first time that scientists have tried to create an invisibility cloak. However, according to Xiang Zhang, a researcher on the project, these previous attempts, which work by rerouting light around objects, are impractical because “[t]hey are really bulky.” This new, much thinner, cloak works differently. Here’s a rough sketch of how it works (A complete account of the study can be found in Science):

The way we perceive objects visually has to do with the way that light bounces off of objects. When light bounces off of a three-dimensional object, the returning waves are distorted, which allows us to perceive the shape of the object. The new invisibility cloak works by changing how the light bouncing off an object is distorted. According to The Guardian, the material, only 80 nanometers thick, is covered in tiny gold dots:

By tuning the gold dots to absorb and re-radiate light in different ways, Zhang’s cloak can either undo the distortions, so the reflected light looks as if it has come from a flat surface, or create new ones, making the surface look rippled or full of bumps.

Although the material in its current conception could be used to mask or change the appearance of large objects, it would only work for objects that aren’t moving (So no sneaking around Hogwarts, unfortunately). Zhang suggests, however, that making the cloak “adaptive” is the next step in research. The cloak could be useful in a number of contexts, including military applications and even cosmetics. Zhang explained, “You can imagine if someone has a fat belly, like me, and he wants to look nice, he could put this layer on and it will look like a six pack.”

While we’re on the subject, here are a few other items from Harry Potter that I would like to see exist IRL. Dear Science, if you could get on these and send the finished products to "Lara, c/o Bustle," that would be great:

Because then, I would never have to choose between going to work or staying in bed and reading romance novels all day. I could just do both.

Just think how much money you could save on gas!

Traveling would be such a breeze if I could just carry my entire apartment with me in a little satchel. To be fair, I sort of feel like Hermione stole this one from Mary Poppins.