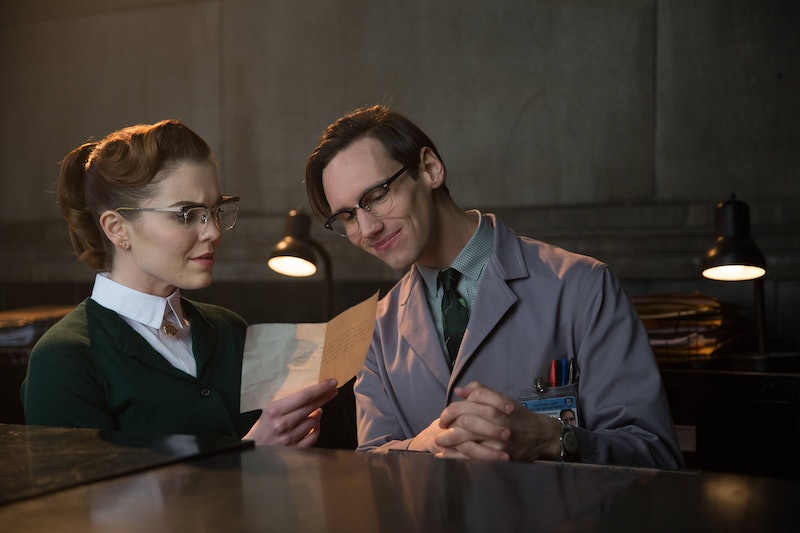 Gotham City may be the home to some of the most heinous criminal masterminds we've ever had the displeasure of meeting, but that doesn't mean there still isn't room for an epic romance or two. (Hey, even bad guys need some love, people!) And according to a recent chat Bustle had with Cory Michael Smith, who plays Edward Nygma, about Gotham Season 2 spoilers, the actor hinted that our beloved Riddler-in-training may find love with a certain record keeper at the Gotham City Police Department. I'm, of course, referring to the relationship between Edward Nygma and Kristen Kringle, who have grown chummier and chummier with each other over the course of the series. So is it possible that these two will finally get together in a non-work related way? Smith indicates that this new side to his character will certainly help him have a way with the ladies.

"This id version of himself — this Darker Nygma, if you will — will kind of be taking on a coaching role," Smith explains. "Like how do I teach this sad man how to flirt? How to pick up women? How to stand up to somebody? We will definitely see an evolution of Ed as he embraces a better part of himself." So we can expect to see Ed get his flirt on with Miss Kringle, perhaps? "Yeah, there might be some glimpses of suaveness." Something that I think we all can't wait to see come to fruition.

And just in case you were worried about Miss Kringle's fate now that she's got her suspicions about Ed's involvement in Officer Tom Dougherty's disappearance, don't be. Because, according to Smith, his character has no intention of harming her in any way, regardless of what she does and doesn't discover. "I can very confidently say that Ed has no intention of hurting her. He would never want to hurt her. She is arguably the love of his life." (Say it with me now: awwww!!!)

Granted, killing a person's boyfriend isn't necessarily the healthiest way to start a relationship with someone, but let's not forget that this is Gotham City we're talking about here. Murder and mayhem kinda come with the territory, so we'll take as much romance as we can get out of any scenario. And if it just so happens to be between Mr. Nygma and Miss Kringle — well, then that's one tantalizing riddle I can't wait to see solved.