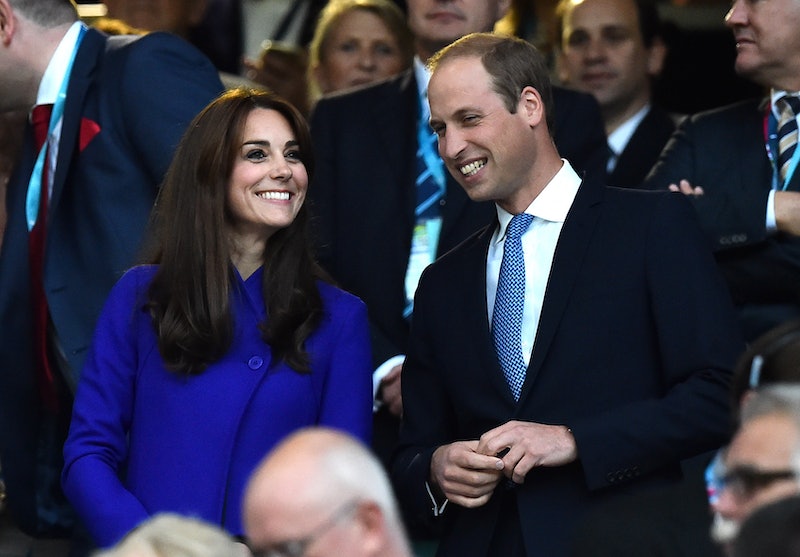 Have you ever read those articles about how "stars are just like us," aka they, too, pump their own gas, go to the grocery store, and even buy coffee at Starbucks. Well, when it comes to preference in TV shows, movies, books, sports, and celebrities, famous individuals are also "just like us." That's right, they let out their inner fan. For example, Prince William and Kate Middleton are fans of all kinds of people and things in the entertainment world.

The best part? They aren't afraid to cheer, smile, yell, or act like total idiots when they're geeking out over, let's say, Beyoncé and Jay Z. I mean, who can blame them? That's how "normal" people are supposed to act. Well, at least I do. When the Duke and Duchess of Cambridge get their fan on it makes them even more lovable, which is hard to imagine, especially after seeing photos of them with their kids, Prince George and Princess Charlotte.

Here are four times Will and Kate acted like fans, because they, too, like to have fun. You know, when they aren't giving back to important causes, ruling a country, taking part in British traditions, and being parents.

1. That Time They Channeled Their Inner Harry Potter Characters

Leave it to William, Middleton, and Prince Harry to make Harry Potter fans fall in love with the series all over again. This is how all Potterheads should act while touring the set and letting their inner witch or wizard shine.

Remember that time Middleton visited the Downton Abbey set? Anyone jealous? Yeah, me too. If only all true fans like the duchess could meet the cast, tour the set, and take photos.

3. Every Time They Attend A Sporting Event

It doesn't matter if they're attending Wimbledon, a rugby match, or the Olympics. The couple can't help but show their excitement. Just look at them cheering!

4. All Those Times They Met Celebrities

Whether they're meeting Tom Hanks, Beyoncé and Jay Z, Reese Witherspoon, or One Direction, deep down you know the royals are freaking out. Who wouldn't?

It's nice to know that Prince William and Kate Middleton are just like every other fan when it comes to Harry Potter, Downton Abbey, and, of course, One Direction.