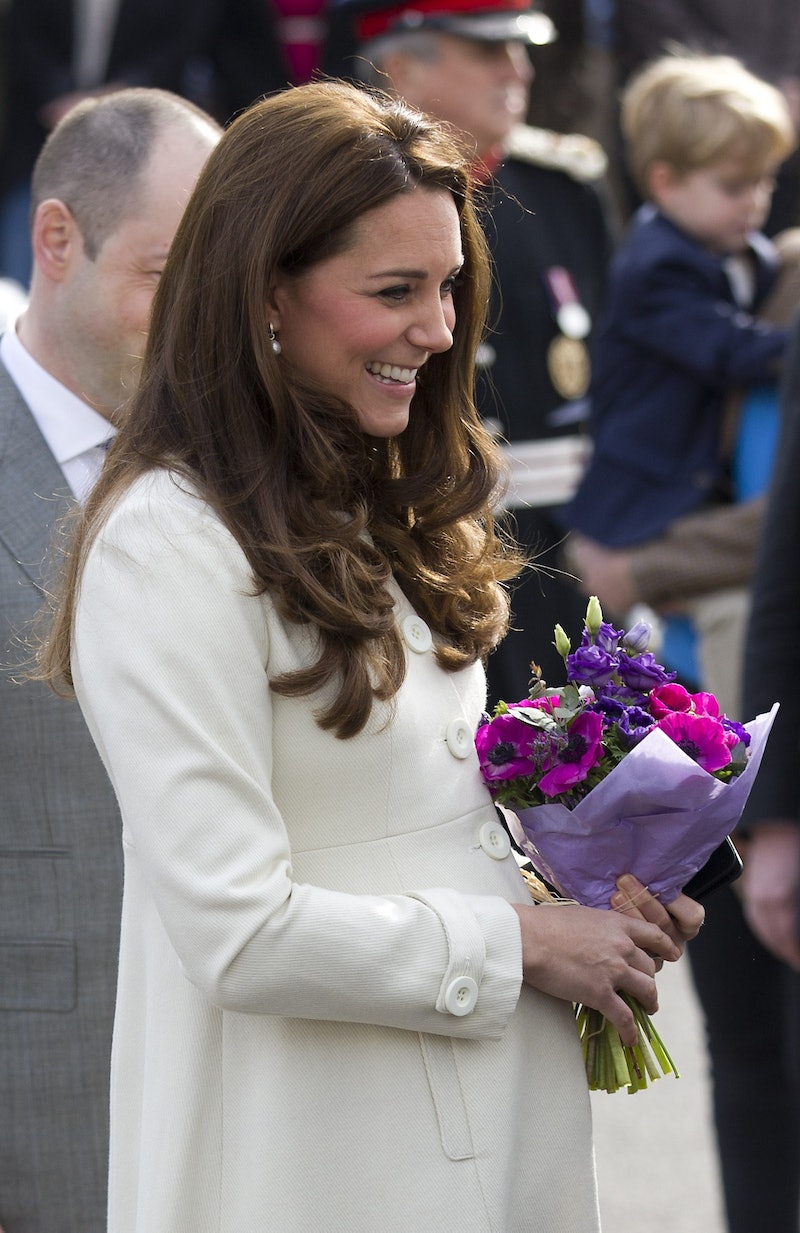 If you weren't convinced Kate Middleton is the coolest member of the royal family, this ought to do it for you. On Thursday, March 12, Kate Middleton visited the set of Downton Abbey , living out the dreams of just about anyone who watches the show — and her own, of course, since she and Prince William are actually pretty big fans.

According to Us Weekly, Middleton spent the day at West London's Ealing Studios, where she checked out some of the show's sets, met cast members, and went behind the scenes to visit with costume designers, set and prop designers, and makeup artists. Basically, Middleton is making a lot of people jealous, especially once you see the pictures that were taken during her visit.

While on set, Middleton met Phyllis Logan, Robert James-Collier, Lesley Nichol, Sophie McShera, and Michelle Dockery, among others — or maybe I should say they met her, because a duchess on set is a pretty big deal. The most adorable moment of the day happened when one of the twins who plays George Crawley presented Middleton with a wooden toy train inscribed with Prince George's name to bring home to her little one. How sweet is that?

Now that Middleton's dipped her toes in the television world, she should consider coming stateside to visit the set of a few more of my favorite shows. Maybe I'm being selfish and just want photos of Middleton with some of my favorite stars, but she may as well extend her set visiting kick before baby number two arrives, right?

There's something about the juxtaposition of a duchess on the OITNB set that I really want to see. Since the cast is so awesome, it would probably be a really fun set to visit. And it'd be even cooler if Middleton was down to play a prisoner — not that I can ever see that happening in real life, of course. Don't act like you don't want to see a photo of Kate Middleton and Crazy Eyes standing side by side.

And if you ask me, Middleton would make an excellent guest star — playing herself, though. The interactions between Schmidt and actual royalty? It would be too perfect and would almost certainly end in him begging Middleton to take him home to Kensington Palace where he belongs.

Mostly because I want to see Middleton play a patient, or better yet, a visiting surgeon. She'd be in cardio. Besides, a photo of Middleton with the Grey's cast? I'd have to have it printed out in poster size so I could use it to wallpaper my house.

If Middleton doesn't already watch Scandal (and I can't imagine why she wouldn't, because Kerry Washington is amazing), she'd probably love it. She and Olivia Pope have plenty of things in common, especially where their wardrobes are concerned. Middleton and Washington could talk mommyhood, and she could visit the fake White House. Sounds like a win/win to me.