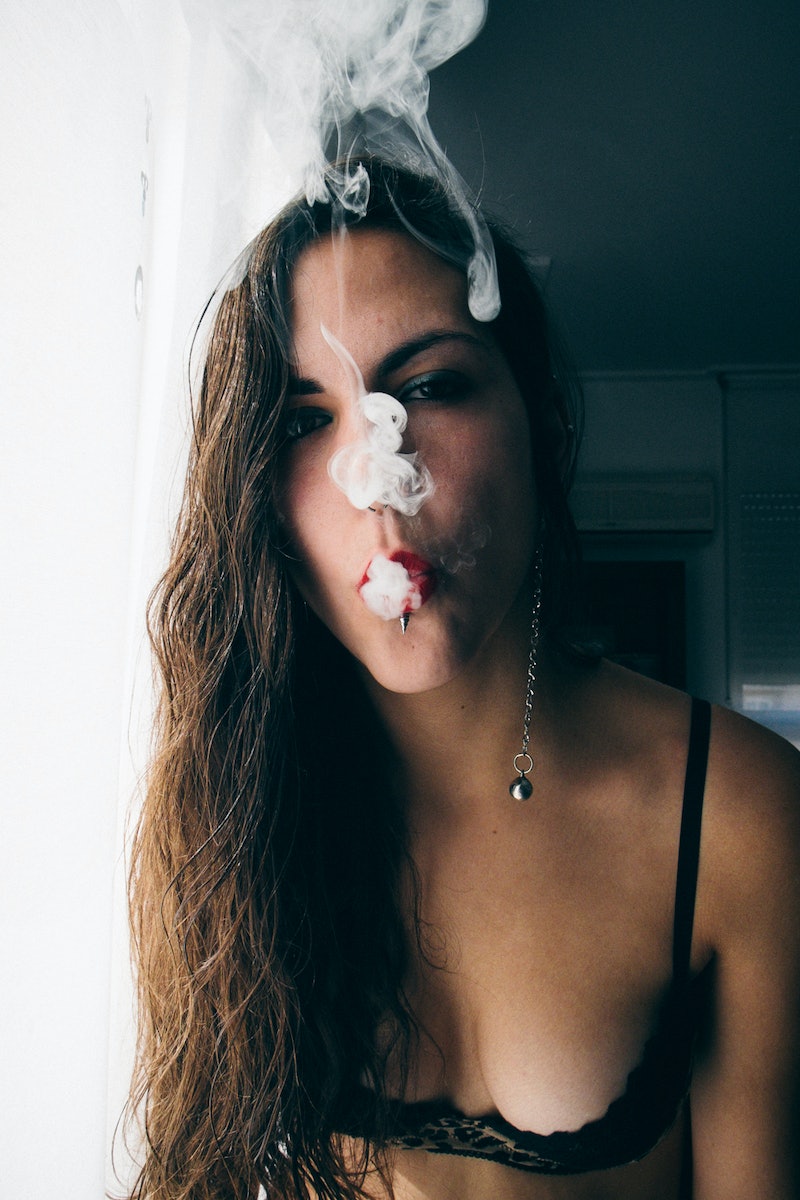 You've probably heard quite a bit about the health benefits of vaping nicotine versus smoking it, and even if you haven't, I'm sure you've seen enough e-cigarettes in use to know how popular they've become. But what's not quite as well documented (because, well, it's not quite as legal yet) is the rising popularity of using vape pens for weed — because although smoking weed is less likely to cause lung cancer than smoking cigarettes is, smoking anything isn't great for you, and the health benefits of vaporizing marijuana versus smoking it are pretty hard to ignore.

Although I don't own a vape pen myself, (at least not yet) and I've only actually vaporized marijuana a handful of times since my introduction to sweet, sweet Mary Jane back in my junior year of college, the health benefits of vaporizing weed are so compelling — especially if you're more than just an occasional stoner — that I'm pretty sure there's going to be a vaporizer purchase in my near future.

Whether you're a self-proclaimed pothead, you only smoke socially, your use of cannabis is strictly medicinal, or you just prefer a good after-work-toke over the more "socially-acceptable" glass of red wine, you should be aware of the health benefits of vaporizing weed — because while there aren't really any long-term studies on the issue, the research that is available will probably make you want to invest in a vape pen ASAP. Here are four health benefits of vaporizing weed instead of smoking it.

1. Vaping Exposes You To Fewer Toxins Than Smoking Does

OK, so we've already talked about how smoking weed is less harmful than smoking cigarettes, but even smoking weed can be bad for you, because it still exposes you to harmful toxins. The combustion of marijuana results in several known carcinogens and tar, which can lead to lung irritation and even chronic bronchitis.

Vaping marijuana, however, essentially turns this into a non-issue. When you vape, 95 percent of your vapor consists of cannabinoids, (the weed chemicals that work to relax your mind and body) which means it's 95 percent carcinogen-free. Conversely, 88 percent of combusted smoke, (the smoke you get from lighting joints, bongs, blunts, and bowls) consists of non-cannabinoids.

2. Vaping Allows You To Inhale Less Smoke Into Your Lungs

Inhaling anything is hard on your lungs, but since vaping lets you absorb 95 percent of the THC in your cannabis within seconds of inhaling, you likely won't feel the need to take as many (or as deep of) puffs when you're vaping as you would if you were smoking.

3. Vaping Can Actually Undo The Respiratory Symptoms Caused By Smoking

A 2010 study of 20 frequent cannabis users (who had all reported experiencing various respiratory symptoms prior to the study's beginning) showed that vaporizing weed for a month resulted in, "meaningful improvements" in their lung health, and it also minimized the subjects' respiratory complaints.

So, basically, vaporizing weed not only prevents excess damage to your lungs, it can literally undo the damage (at least symptomatically) you've already caused from all those bong hits, joints, and pipes.

If you're anything like me, then you've probably smoked weed in order to relieve a variety of aches and pains. Personally, I have found that weed helps to better relieve my menstrual cramps, ovarian cyst pain, headaches, and general work-out-related soreness than ibuprofen or acetamenophin ever does — but, evidently, vaping would work even faster than smoking.

Though I haven't tested the pain relieving affects of vaping versus smoking myself, Leaf Science reports that vaping is the fastest way to experience pot-induced pain relief. It makes sense, because cannabinoids are what makes weed such a great pain reliever, and vaporizing weed allows you to absorb more cannabinoids faster.

So although vape pens are a bit of an investment, if you rely on weed for pain relief, the extra expense just might be worth your while.

More like this
All The Benefits You Get From Sitting In A Sauna
By Carolyn Steber
This Psychological Effect Might Be Keeping You From Hitting Your Goals
By Lexi Inks
19 Latinx Therapists & Mental Health Experts To Follow On Instagram
By Kaitlyn Wylde, Naydeline Mejia and Lexi Inks
The 5 Best SLS-Free Toothpastes, According To Dentists
By Amy Biggart and Danielle Calma
Get Even More From Bustle — Sign Up For The Newsletter