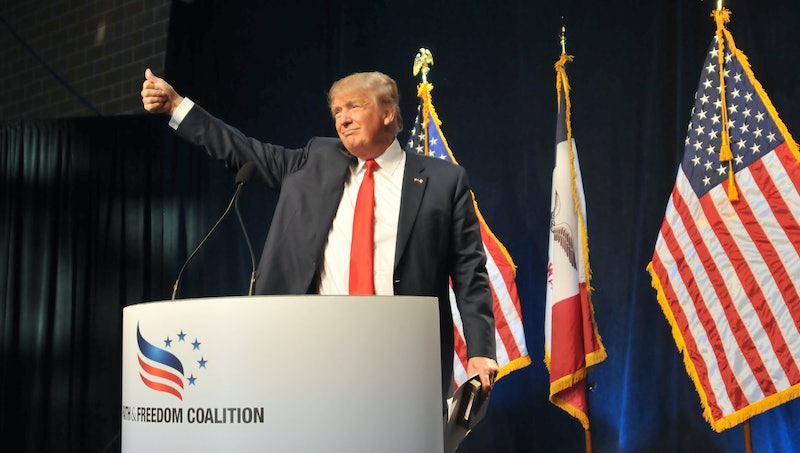 Brace yourselves, world. Donald Trump is publishing a new book. The title hasn't been announced yet, but it's scheduled to be released sometime in October. So, if you've already gotten tired of Trump, his offensive comments, and the entire presidential race, this is probably not welcome news. Trump fans, though, will surely be excited.

Unsurprisingly, the upcoming book will be directly related to Trump's campaign for president and his current efforts to secure the Republican nomination. In keeping with his oft-repeated promise to "make America great again." According to the publisher, Threshold Editions:

Trump will outline how a crippled America could be restored to greatness. ... The book will explore Trump's view on key issues including the economy, big CEO salaries and taxes, healthcare, education, national security, and social issues. Of particular interest will be his vision for complete immigration reform, beginning with securing the borders and putting American workers first.

Trump is the author and co-author of several other books, including Think Big: Make It Happen in Business and Life, Trump Strategies for Real Estate, and The Art of the Deal. And, if you think the book sounds familiar to another work, his 2011 book Time to Get Tough: Making America #1 Again, you aren't alone. In fact, an updated version of the book was issued in August. Still, it's understandable that, since he's now the front runner for the Republican nomination, Trump might want a new book altogether.

Trump himself certainly seems proud of the upcoming new release. "Not since The Art of the Deal have I had this much fun writing a book," he said in a press release from his publisher.

Trumps last book, Time to Get Tough, spent a week on the New York Times extended bestseller list at No. 27, and with his current popularity and media attention, it's likely that the new title will also be a best seller. We'll just have to wait and see.