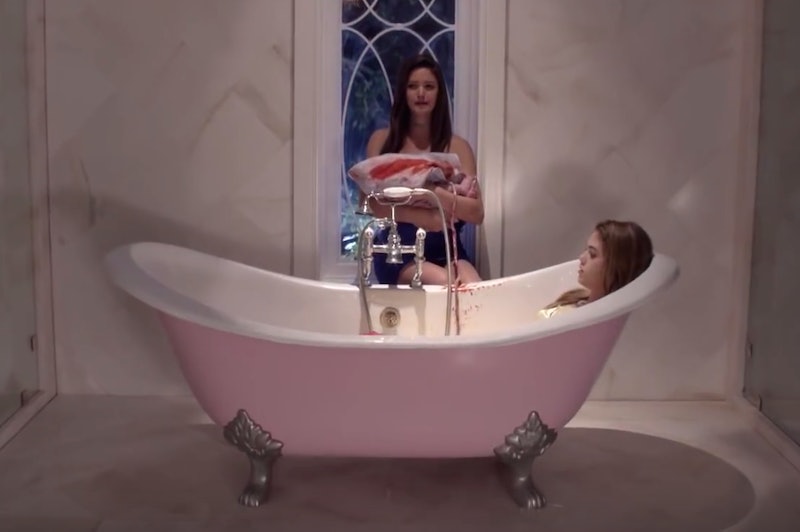 Slasher shows and movies always have some kind of creepy, mysterious backstory for the main characters to uncover, and FOX's new series Scream Queens continues that tradition. The two-hour premiere began with a flashback to a party at the Kappa Kappa Tau sorority 20 years ago, when a young woman had a baby in a bathtub and passed away because her sorority sisters chose to go dance to TLC's "Waterfalls" instead of take her to the hospital and help stop the bleeding she sustained during childbirth. We later learn in the episode that the whole scandal was covered up by the now Dean Munsch, but a few questions remain: Who was the baby in the bathtub all those years ago? Did they grow up to become the killer? Have we met them already?

Much like the recent Scream TV series, the mystery lies in each and every one of these characters. My guess is that the baby from the flashback is indeed the costumed serial killer, but it is interesting to see how the mystery unfolds as people continue to die off. Emma Roberts revealed to Variety that someone dies each week on the series, so it will be easier to discover the killer and the potential grown-up baby as characters are picked off left and right. But before anyone else is crossed off the list of suspects, I have a few theories.

Since we already know Pete is the right age to be the baby grown-up, and that he already has the devil costume because he is a mascot for the university, Scream Queens is dropping hints that Pete is filling both of those roles. But considering that these hints came so early, I think he is more of a red herring than red devil. Sure, the guy is a little weird, but I think he's mostly just really afraid of the mysteries hiding within the Kappa House.

But that does make me wonder what we really know about the baby at all. We know they were born 20 years ago, so that would be their current age, but we don't know if the baby was a boy or a girl. That means pretty much any Kappa sister or Dollar Scholars member could be the baby, but I have a few guesses.

If the baby is a boy, my guess is Boone. We've already seen him fake his death, and he was talking to someone who pulled him out of the morgue. He could be taking revenge on the Kappas by killing the various sisters and making those left standing look very suspicious.

And if the baby is actually a girl? I'm going with Chanel Number 5. She's obviously not meant to be one of Chanel's minions and gets some pretty obnoxious comments thrown her way from Chanel. Chanel No. 5 could easily be the baby grown-up and even the killer, if her desire for revenge and the truth being set free is strong enough. But of course, things could change in an instant next week.

For now, I'm actually more interested in uncovering more about the flashback than finding out who the killer is, unless the two happen to be the same person. Ryan Murphy already has me hooked on Scream Queens, now let's see where this all leads.