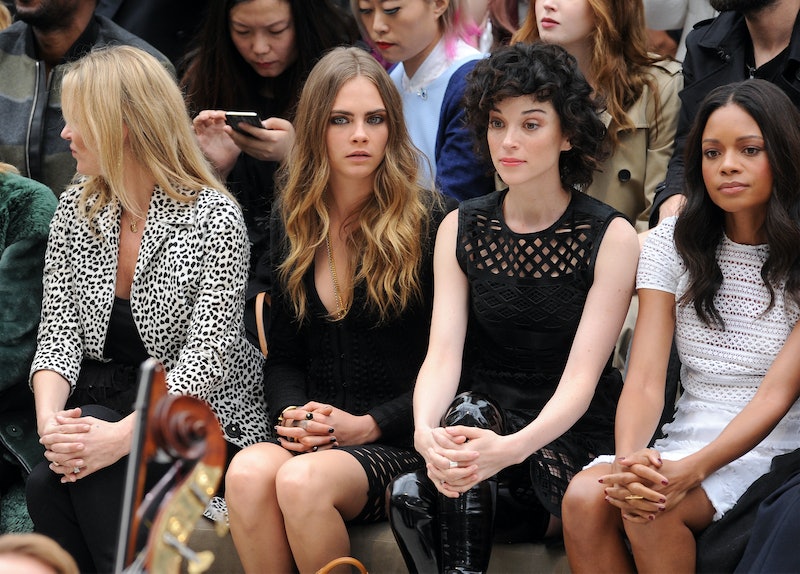 Some might know Annie Clark, aka St. Vincent, as the incredibly talented Grammy Award-winning singer-songwriter. While others might be just getting to know her now because she's dating supermodel Cara Delevingne. Clark has always kept a low profile as a musician, but when you start dating the hot young model of the moment, talk is inevitable. First reported to be dating in December 2014, the couple has apparently already gone through some ups and downs, but now, at the start of London Fashion Week, they look happily in love. So, how did Cara Delevingne and St. Vincent meet in the first place?

The first indication that the two were seeing each other in some form, whether friendly or romantic, was when Delevingne was spotted at some of Clark's shows on the fall 2014 leg of her tour with The Black Keys. A couple of fans tweeted that the 23-year-old was at the show and people started questioning why Delevingne was in the middle of Tulsa, Oklahoma hanging out with the singer.

On Feb. 25, at the BRIT Awards, where Clark was nominated for Best International Female Artist, the couple was spotted being "cozy" while sitting next to each other at the show and at a Universal Music after-party. After the BRIT Awards sighting, Metro reported that the two had been together "after meeting in December last year and [Delevingne] having followed [Clark] around on her US tour ever since."

Let me tell you, I searched the Internet thoroughly but it is very difficult to find any indication of how exactly they met; although the when seems pretty clear.

By April 2015, Delevingne got rumors stirring of a breakup when she uploaded a heartbreaking Instagram post, which most people connected to her relationship with Clark. Quick to bash any rumors, she wrote out a message loud and clear on Twitter, in case anyone was confused on the status of her relationship or love life. She didn't name Clark specifically, but her previous Instagram of the 32-year-old's baby picture said it all:

Since then, the couple has remained fairly undercover, with only a few cameos on each others' social media accounts, but nothing too overtly "lovey dovey." It was only until Delevingne covered the July 2014 issue of Vogue that she opened about her love life, and she gave quite a beautiful statement:

I think that being in love with my girlfriend is a big part of why I’m feeling so happy with who I am these days. And for those words to come out of my mouth is actually a miracle... It took me a long time to accept the idea, until I first fell in love with a girl at 20 and recognized that I had to accept it.

Despite a few break up rumors here and there, the women appeared at London Fashion Week looking happy as ever and holding hands. So, even if they've only been together for less than a year, it is clear that Delevingne and Clark are passionate women who make a great match.