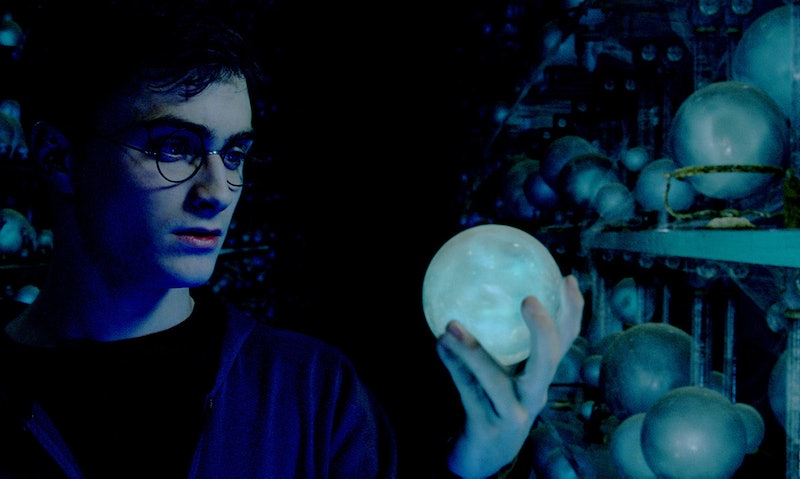 Every Potterhead's favorite website just got a whole lot better: a new Harry Potter backstory in the recent Pottermore update has the Internet abuzz. It just goes to show that, when you thought you knew everything about The Boy Who Lived, J.K. Rowling will pop up to surprise you. Rowling recently wrote an article for Pottermore's post-overhaul relaunch, and it's a doozy. Here are all the juicy biographical details from "The Potter Family."

Rowling begins with the history of the Potter name, which she says began with 12th century wizard Linfred of Stinchcombe, who was known as "the Potterer" to his Muggle neighbors. The non-magical folk didn't realize that their town eccentric's folk cures were actually magic potions. Linfred got rich off the sale of his concoctions — some of which would later become Skele-gro and Pepperup — and "le[ft] a significant pile of gold to each of his seven children" as inheritance.

Hardwin, the Potterer's son, married Iolanthe, the eldest granddaughter of Ignotus Peverell — yes, the Ignotus Peverell. Iolanthe inherited her grandfather's invisibility cloak and began the tradition of passing it down to the eldest child of each successive generation.

The Potter family grew richer, as more and more of them took after Linfred's tinkering ways and made their own fortunes in the world. Still, many of them were not inclined to be famous. Certainly no Potter was ever as famous as Harry, but they were not altogether unknown, and two even served on the Wizengamot.

Ralston Potter, a Wizengamot member from 1612-52, supported the Statute of Secrecy, which held that the wizarding world should hide itself from Muggles instead of waging war in an attempt to dominate them. In the early 20th century, Henry — or Harry, to his friends — called for witches and wizards to aid Muggles in World War I and spoke out against the Minister of Magic, under whom such exercises were prohibited. As you can see, the Potters were always pretty Muggle-friendly, but this caused many pureblood wizarding families to exclude them from the higher social echelons.

It was Fleamont Potter, the eldest son of Henry, who made the family truly wealthy. He invented Sleekeazy's Hair Potion, which you may remember Hermione using to tame her hair for the Yule Ball in Harry Potter and the Goblet of Fire. With four times more gold in Gringotts than before, the Potters lived comfortably after selling the Sleekeazy's company, but Fleamont and his wife, Euphemia, remained deeply saddened by their childlessness. That is, until Euphemia discovered that she was pregnant.

Their son, James Potter, grew up and married a young woman by the name of Lily Evans. Fleamont and Euphemia didn't live long enough to meet their grandson, as both died of dragon pox sometime after their son's wedding. In keeping with Potter family tradition, James inherited the invisibility cloak ... the rest, of course, is history.