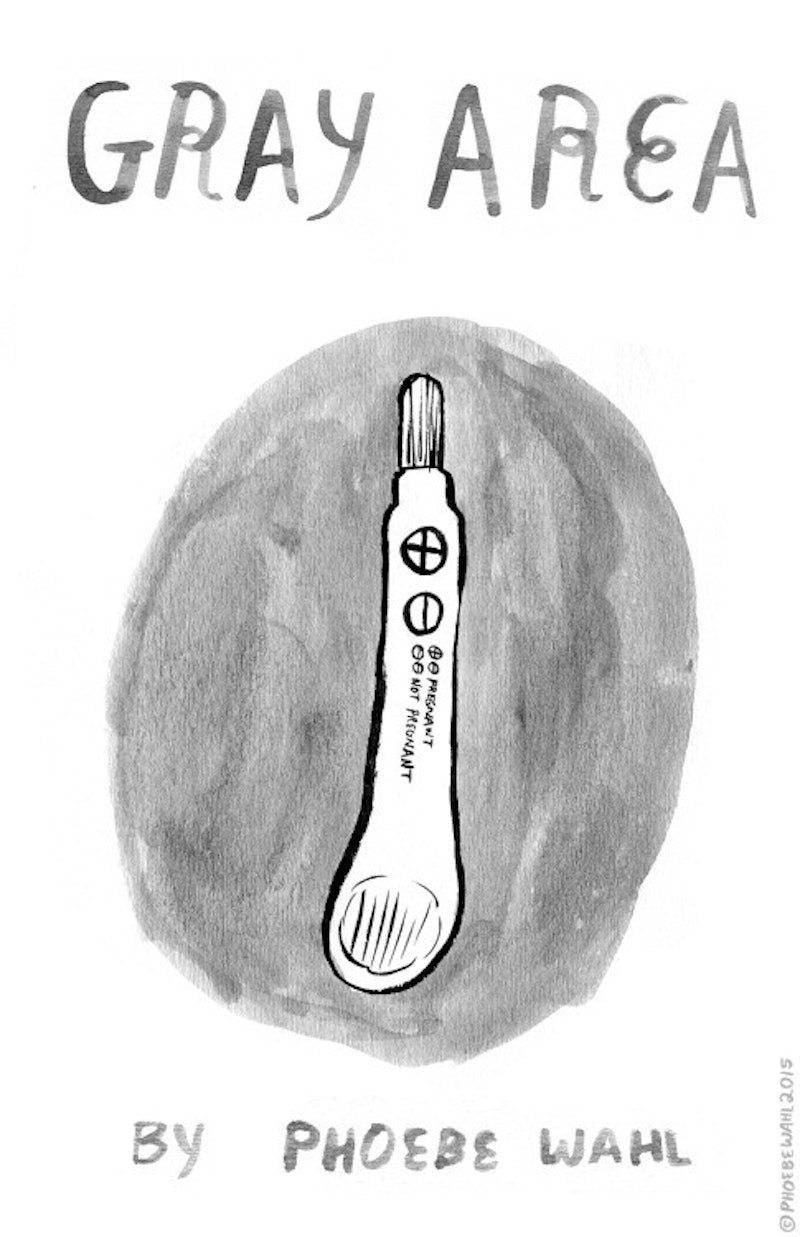 When artist Phoebe Wahl experienced an unplanned pregnancy that ultimately led to a miscarriage, she found the dearth of stories about situations like hers both puzzling and troubling. So, she created the "GRAY AREA" zine, which tells the autobiographical story of a woman's unplanned pregnancy, to gain clarity about her own struggle and comfort others in the same position.

From her discovery that her IUD failed to her miscarriage, Wahl provides a glimpse into the thoughts that might run through someone's head as she finds out she is pregnant and strives to make the best decision for her situation. Wahl's website reads that stories like these are especially important in the midst of the House's vote to defund Planned Parenthood: "This zine is largely about choice, one that is rarely black and white. A choice that without safe spaces like Planned Parenthood, would not be available to most women."

Wahl told Bustle in an email that she created the book "to creatively process a recent experience with an unexpected and subsequently lost pregnancy," as well as to increase awareness of a common experience and help others feel less alone:

I found the silence surrounding the issue of miscarriage to be deafening. Which was strange to me as it is such an incredibly common occurrence. After going through it, women in my life seemed to come out of the woodwork with almost identical stories, of failed birth control, of panic or excitement or both, of abortions and miscarriages and ultimate reconciliation and empowerment. And now that I’ve published it online, there has been such an amazing outpouring of gratitude from strangers who have had extremely similar experiences.

The story, readable on readable on Wahl's Tumblr, starts with an image both serious and humorous: A grave for the protagonist's IUD, which "fell asleep on the job."

Then, we get a glimpse into her internal dialogue:

We learn how the experience affects the character's feelings about abortion: She considers it only because she wants what is best for her and her would-be child, and experiencing a pregnancy first-hand reinforces her belief that abortion is a personal decision. She also expresses gratitude that she is privileged enough to have access to reproductive health services; this situation is much harder for those who don't.

Wahl ultimately never had to decide whether or not to get an abortion; as she puts it, "My body made a decision for me." However, she still hopes her story speaks to those faced with that choice. She told Bustle in an email:

There is so much internalized shame and stigma surrounding reproductive choices, on either end of any decision. While GRAY AREA is ultimately about having a lack of choice, it also is about the colossal weight of the options I was weighing before my miscarriage. And about how those choices are so NOT black and white so much of the time.

The book's poignant ending shows us how, while miscarriage and abortion are not the same as the death of a person, they can feel like the death of a possible future, and mourning that future is normal. An abortion can be sad and still be the right decision.

In a culture where topics like unplanned pregnancy, abortion, and miscarriage are rarely spoken of, narratives like Wahl's serve the important role of displaying these experiences' complexity and reassuring people that they're not the only ones feeling all these conflicting emotions. In fact, if GRAY AREA's reception is any indication, a surprising number of people can relate.

You can read the whole zine at PhoebeWahl's official website or Tumblr and connect with her on Twitter @PhoebeWahl.