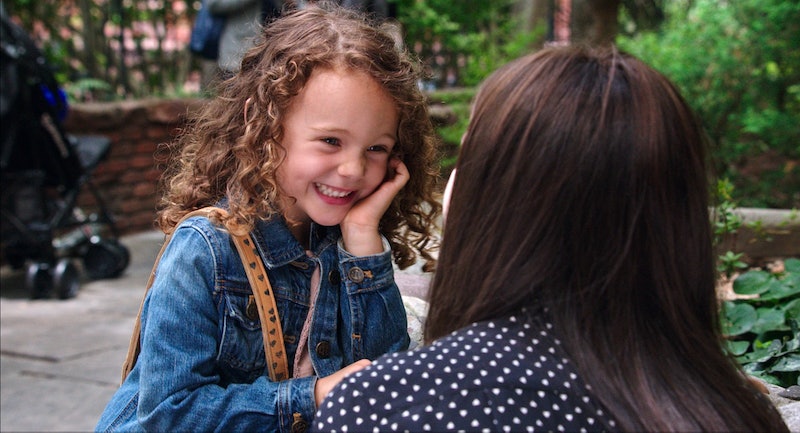 Anne Hathaway plays the CEO of a fashion e-commerce company in The Intern, a new comedy from Nancy Meyers. Hathaway's character Jules is a total A-type who forms a bond with an unlikely intern at her company: the AARP-eligible Ben, played by Robert De Niro. Ben proves to be a source of support to Jules as she tries to balance being a powerful business leader with being a mother, and he also befriends her daughter Paige. This little girl is absolutely adorable, and the character is as well-dressed as you'd expect the offspring of a fashion CEO to be. But despite having an important role in a film with huge stars, the actress who plays Paige in The Intern might not be familiar. Her name is JoJo Kushner, and she's a small girl making her breakout appearance on the big screen.

The Brooklyn-born Kushner was previously in a Chanel No. 5 commercial, but The Intern is her first role in a film. While the young actor hasn't yet received a ton of press, she has that curly-hair-dimpled-smile combo that's bound to capture the hearts of viewers. She's also a micro-fashionista, and her wardrobe in The Intern has been analyzed for replication by fashion sites such as The Take. It must be a crazy amount of pressure for such a young girl, but Kushner manages to pull off a variety of styles and look totally cute doing it. A few examples:

Paige Is Pretty In Pink

In this scene from The Intern, Kushner plays around with De Niro while sporting a bohemian blouse with salmon pants and ballet flats. It's kind of like the outfit you wore to brunch last week, but without the syrup you spilled on it.

JoJo Goes Glam For A Premiere

Critics couldn't stop raving about Anne Hathaway's glamorous dress at the premiere of The Intern, but JoJo looked utterly angelic in a delicate — and age-appropriate — cream frock.

Another flowy blouse looks innocently sweet on Paige (and those curls!!). Luckily, peasant blouses can easily be translated into a grown-up look... just leave the stuffed dog at home.

JoJo Kushner is living the dream of any young actress and any young fashionista. Her IMDB page is equally cute; it states that Kushner loves "studying ballet, reading chapter books and eating lots of strawberry ice cream." Here's to hoping that The Intern is only the beginning and that Kushner continues to rock ballet flats on- and off-screen for years to come.

More like this
Keke Palmer Paid Tribute To "Other Half" Darius Daulton After Announcing Pregnancy
By Jake Viswanath
Raheem Sterling Had To Choose Between His Family & The World Cup
By Bustle UK
Yes, That's Lindsay Lohan's Sister Singing In The 'Falling For Christmas' Movie
By Radhika Menon
'The Holiday' Director Just Addressed *Those* Sequel Rumours
By Sam Ramsden
Get Even More From Bustle — Sign Up For The Newsletter