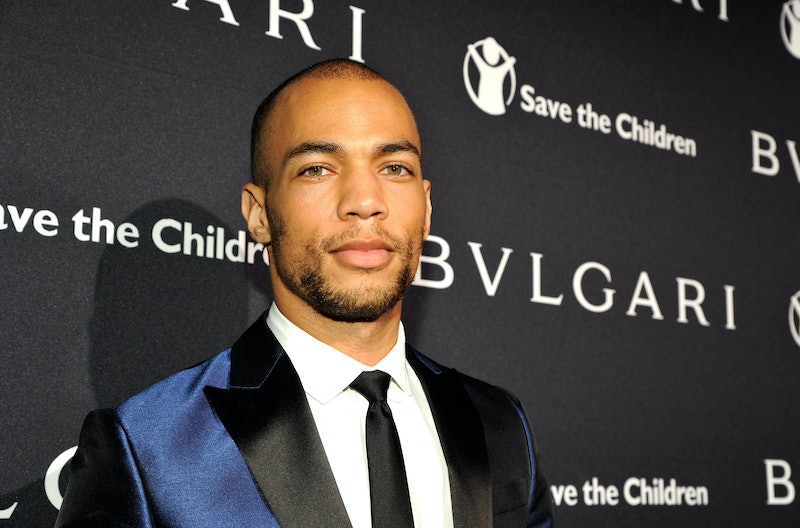 When ABC's intriguing sophomore thriller How To Get Away With Murder returns for a second semester — I mean, season — there will be at least one new kid in school. While everyone's running around frantically trying to figure out who killed Rebecca, one actor could waltz right into class and steal the show out from under Annalise Keating's cadre of frazzled students. That actor is Kendrick Sampson, who is joining HTGAWM Season 2 in a "substantive recurring role," per Deadline. But, who exactly is Kendrick Sampson? And, why should Wes, Connor, Laurel, Michaela, and Asher be worried about him?

A Texas native, Sampson grew up in a family of musicians and knew he wanted to break into the biz from an early age. "I think I was around 11 when I saw a Gap commercial and said, 'I want to jump on a trampoline,'" he remembered in a 2014 interview with Anthem. "My mom told me, 'Find an agent then.' She gave me a newspaper and I found an agent. That’s pretty much it."

Sampson eventually found his way from Houston to Hollywood, where his first major role was on two episodes of ABC Family's Greek back in 2008. (He appeared as Kappa Tau pledge Woodchuck, sharing an episode with fellow guest star Dave Franco.) He followed up that stint with several short films, and the requisite guest appearances on the likes of CSI and Days Of Our Lives. His next major role wouldn't come until 2013, when he exploded onto the scene of Mystic Falls as teen-turned-vamp Jesse on The CW's The Vampire Diaries.

He debuted in the premiere of the show's fifth season, and quickly swayed fans with his deep voice, piercing eyes, and romance with Caroline. Sadly, the body count in Mystic Falls is constantly climbing, and Jesse was [spoiler alert!] staked before the end of the season — but not before Sampson had won himself a massive following.

Sampson followed that up with a series regular role on Gracepoint, FOX's remake of the British series Broadchurch. He played Dean. Although the show didn't survive past its first season, Sampson didn't let that hiccup stop him. In fact, his next project would've been massive... if only it had actually happened. He was cast in Kingmakers , a murder mystery on ABC from the creator of Revenge, which was rumored to be a spinoff of that dearly departed show. He would have appeared alongside fellow TVD actor Michael Trevino, Heroes' Adrian Pasdar, and True Blood's Kristin Bauer van Straten. But, in the end, ABC declined to pick up the Kingmakers pilot to series, and we'll never get to see what nefarious, vengeful deeds Sampson might have gotten up to.

Fortunately, his new role on HTGAWM should make up for that — and you won't have to wait long to meet him, either. Sampson will first appear in the Season 2 premiere (perhaps as the mysterious Eggs 911?), but you can already get your first glimpse of him on the set of the ABC drama in this behind-the-scenes video of the entire cast confessing to Rebecca's murder:

Don't let his steely gaze or his reputation as a killer vampire fool you; Sampson's just as human as the rest of us, right down to silly celebrity crushes: "Jennifer Lawrence is ridiculous and I have a pretty big crush on her," he confessed in that Anthem interview. Who doesn't, Kendrick? Who doesn't.

Season 2 of How To Get Away With Murder premieres this Thursday at 10:00 p.m. ET. But, catch up on Season 1 in this (drunk) recap below: