Donald Trump was back in late-night television Tuesday, and this time, he squared off with comedic titan Stephen Colbert of The Late Show. The billionaire business mogul missed a few punches, namely when Colbert asked whether Trump believed President Obama had been born in the United States ("I don't talk about that anymore," Trump said). But for all his minor gaffes, Trump was relatively well-received, playing along with the late-night host, and acted cordial and friendly throughout the remainder of the interview. He's likely had a lot of practice: Over the years, Trump has been hammered in Saturday Night Live skits, many of which didn't have to stray far from the source to provide raucous entertainment.

Several SNL alum have portrayed the orange-tinged businessman over the years, including Phil Hartman, Jason Sudeikis, and Darrell Hammond, and although their interpretations all varied in the minutiae, each one made sure to play up Trump's signature braggadocio. In an early "Church Chat" sketch from February 1990, for example, Hartman was tasked with impersonating the then-scandal-embroiled Trump, whose real-life counterpart had just been caught having an affair with ingenue actress Marla Maples, whom he later married. When asked by Dana Carvey's "Church Lady" to clear the air regarding the scandal Trump (Hartman) replied that he could simply buy out her cable television program and shut her down.

"Let me clear up a couple gray areas for you, Church Lady. First, nobody puts me on the spot," fake-Trump angrily said. "Second, I could buy and sell you and your little freak show, dog and pony act, whatever this is... You keep your nose outta my business or you'll find yourself on the street — wait a minute, I own the street, I don't know where you're gonna find yourself." Ouch.

Although the dialogue was punctuated with a few over-the-top remarks meant to elicit more laughs, Hartman's impersonation wasn't really that far off the mark, especially considering his most recent run-ins with the press in the 2016 election cycle (racist immigration comments and sexist Twitter feuds, anyone?). The brief "Church Chat" skit wasn't the only SNL sketch over the years to perfectly embody the brash businessman's trademark arrogance either — the comedy show has been giving it to The Donald for the past 25 years.

In a skit from January 2004, Darrell Hammond played up Trump's penchant for boasting about his own wealth.

"Most of you know who I am already, because I'm rich and I'm handsome," Hammond's Trump quipped. "I'd like to talk about my new show [...] The Apprentice — like everything I do, it's gonna be big, and bold, and sexy, and full of class, OK?" He added that he would be looking for a winner who appreciated the "classier things in life," like "solid gold telescopes and 40-foot televisions."

If that sounds familiar, it's probably because Trump unapologetically reminded everyone of his wealth in his campaign kickoff speech this past June, boasting neatly, "I'm really rich." 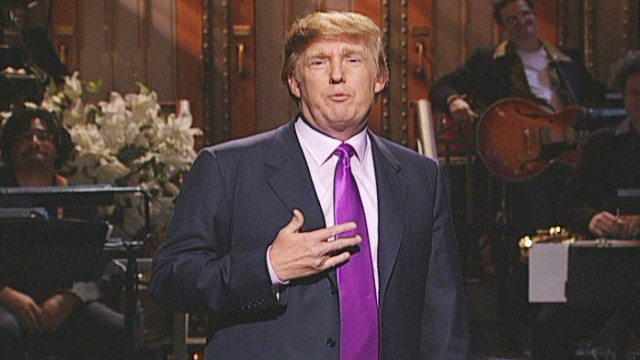 Trump himself hosted the Saturday evening comedy show in April 2004, opening the night by joking, "It's great to be here at Saturday Night Live, but I'll be completely honest, it's even better for Saturday Night Live that I'm here." After winking at the audience (go ahead and shudder a little bit with me), Trump added, due to his busy schedule, he'd be replacing himself that evening with SNL actor Darrell Hammond, who as evidenced by the previous clip, made for a pretty decent carbon copy of the billionaire.

"Nobody's bigger than me, nobody's better than me, I'm a ratings machine [...] but in case I get called — I'm always on business — I got a replacement," Trump explained, bringing Hammond onto the stage. You know what they say: If you can't beat 'em... make them pretend to be you so at least you can act like you own the narrative. Right? 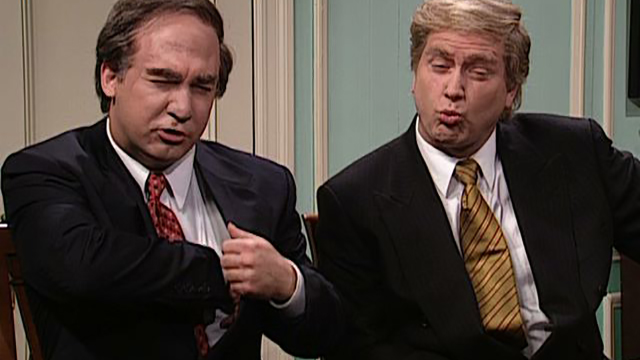 In 1999, Ross Perot was making waves on the presidential election scene with his moderate, populist Reform Party. Former President George H.W. Bush publicly chided the Texas businessman for trying to sway more Republican members to his centrist movement in order to push a new candidate for the upcoming election. Eager to get in on the political melee, SNL recruited then-cast member Cheri Oteri to play the eager Perot as a leader in search of a new star — and one of Perot's willing volunteers? Hammond's Donald Trump.

"Apparently ... I wasn't insane enough for the American people," Oteri as Perot said, asking both Trump and Pat Buchanan (played by Chris Parnell) for their respective stances on controversial issues. When fake-Buchanan replied that "foreigners in general [were] repulsive," fake-Trump then remarked,

Whoa, whoa, whoa — hold the boat. The Donald employs an army of illegal aliens in his many fine Atlantic City hotels and casinos. Sure they steal and talk funny, but [...] they'll work for 15-cents a week.

"The Donald" also took the time to reveal his own revamp of the White House, a casino-like monstrosity he had dubbed, "The Trump House." Fake-Trump may have been shocking, but let's be honest — the entire sketch was alarmingly accurate.

Donald Trump Vs. The Pizza 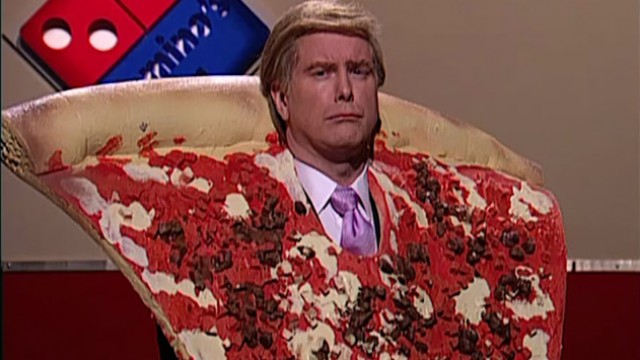 Playing off of Trump's self-deprecating Domino's ad earlier in 2005, SNL writers managed to throw together their own commercial, complete with Hammond as an unmanageable Trump in a pizza costume (if that's not comedy gold, I'm not sure what is). In the clip, Hammond's Trump seemed to have difficulty remembering the name of the pizza company, continually calling it "Dominio's," rather than Domino's.

"Keep rolling, 'cause I'm gonna wing one now right off the cuff, Robin Williams-style," said fake-Trump. "And... action: Cheese-Louise, I'm hungry — hey wait, I'm a slice of cheeseburger pizza from Dominio's, like the game... eat me."

Try controlling your laughter during this brilliant Hammond sketch — I dare you.

Although Hammond has long since gone from the SNL stage, fans of the long-running comedy sketch still have reason to rejoice: On Monday, the NBC late-night comedy show announced that it had selected cast member Taran Killam to play the ever-angry and slightly xenophobic Trump, a decision which Killam's colleague Kate McKinnon, who often impersonates Democratic candidate Hillary Clinton, called "amazing."