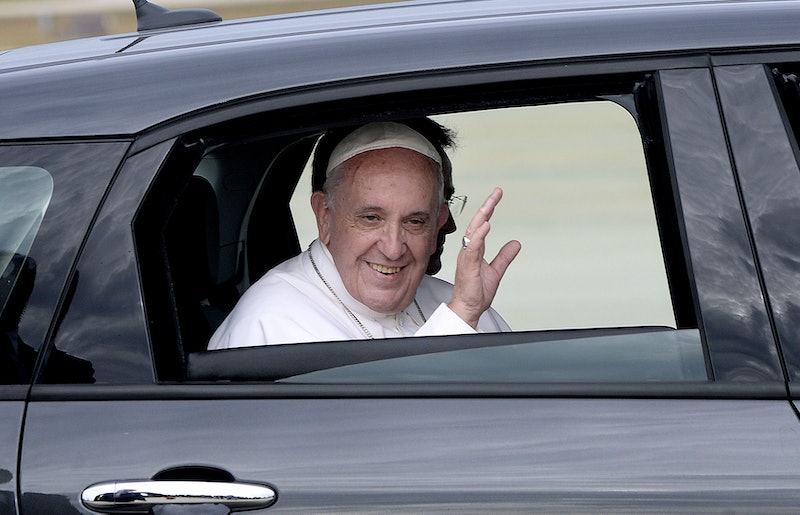 The pope has officially landed in the United States and is already turning heads with his surprisingly casual mode of transportation. Though a chartered Alitalia jet was what ultimately brought Pope Francis across the world to America, it was a small and simple Fiat that picked him up from the Joint Base Andrews airport in Washington, D.C. Pope Francis will still have a popemobile to ride in, however. He'll be using the more welcoming Jeep Wrangler version that lacks a full bulletproof glass enclosure but has open sides to make it far easier for the pope to interact with people. One thing that hasn't changed, however, is the car's license plate. So, what does the Pope's license plate SCV1 mean?

SCV1 is an acronym both in Italian and in Latin. The Latin is "Status Civitatis Vaticanae" and the Italian is "Stato della Città del Vaticano"; translated from both languages, it means "Vatican City." Though the Pope's vehicle while touring the United States will have the SCV1 license plate, there are a wide variety of popemobiles with different corresponding numbers. The Ford Focus — another unusual favorite of Pope Francis — bears the license plate number SCV 00919. According to an Italian paper titled "The Plates and the Vehicles of Vatican City," there are upwards of five other popemobiles with ascending SCV license plate numbers.

SCV2 corresponds with yet another Fiat, while Italian car manufacturer Isotta Fraschini claims the SCV3 license plate. Graham-Paige, an American automobile no longer in production, has the SCV4 license plate. The vehicle was the fifth motorized mode of transportation for the pope, known for its sleek sedan design dating back to 1936. A Citroën car called "Lictoria Sex" that dates back to Pope Pius XI has the SCV5 license plate. According to La Stampa's Vatican Insider site, when the car was in use, it had only been driven a little over a mile and a half a year.

Other popemobiles with SCV license plates, from SCV2 to SCV5, are currently on display in one of the Vatican museums. Each vehicle is a distinct marker of how far the Pope's reach has extended since the early days of finally being allowed to freely travel outside of Vatican City. Prior to 1929, all popes were confined to the small, historic city without the ability to leave. It's hard to imagine not seeing the SCV1 license plate and its corresponding vehicle rolling down major world streets as Pope Francis smiles, waves, and looks onto the adoring masses.