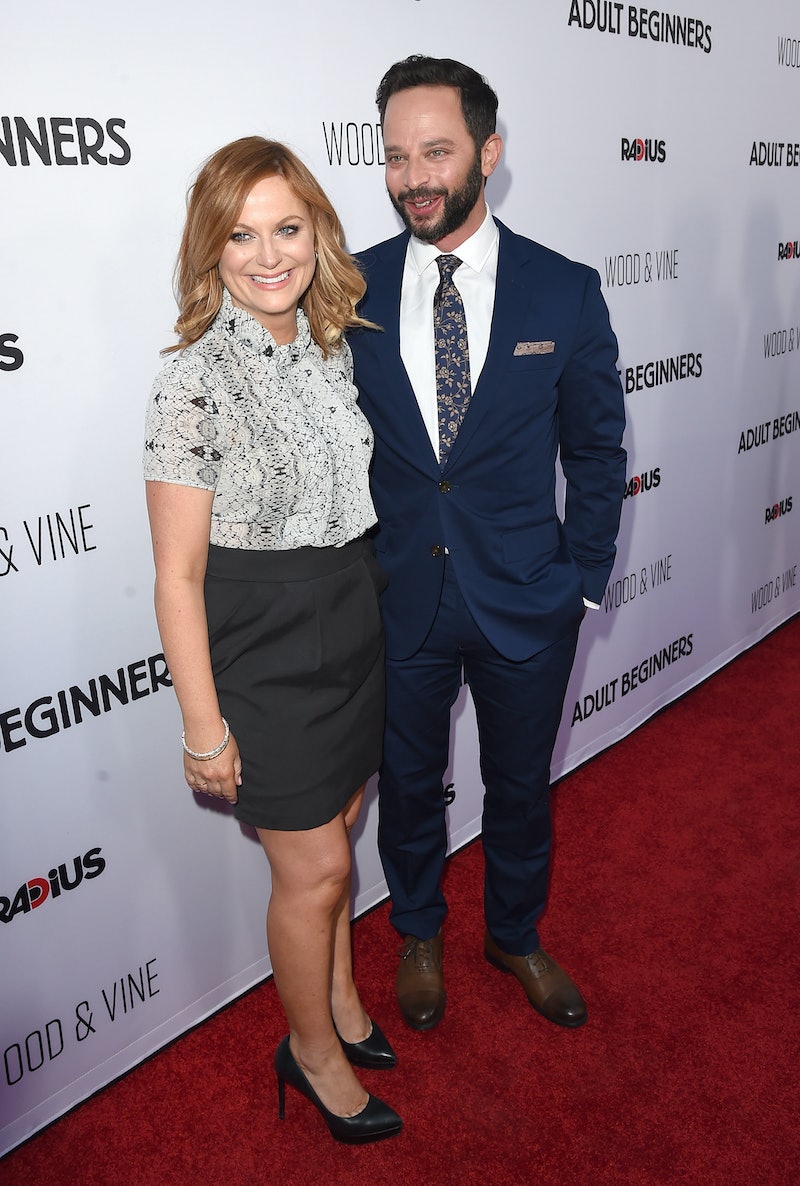 As if it wasn't torture enough enduring a long string of celebrity breakups this summer, it looks like your heartache is not over yet. We kick off the first day of autumn with yet another celebrity breakup in Amy Poehler and Nick Kroll, who split according to Us Weekly. Folks, this is unfortunately no laughing matter. It looks like the comedians who seemed like they were a perfect fit for each other are done — for now, at least. Some fans may be wondering why Amy Poehler and Nick Kroll reportedly broke up. Bustle has reached out to Poehler and Kroll's representatives, but has yet to hear back.

It seems like the main reason for the alleged breakup is the former pair's different schedules, according to the Us Weekly report. Upcoming projects reportedly started coming up between the two all the time. Of course, that does not mean the lovebirds that once were did not try to work around their hectic work lives. After all, they were together for an entire two years before the breakup happened. An insider dished, "They really tried, but it just wasn’t realistic anymore. They were spending more time apart than together."

While it is good to hear that this split was not the result of some awful fight or another form of drama between the two, it is still heartbreaking nonetheless. Based on the sweet things the two had said about each other, and the undeniable affection that was so apparent whenever they were near each other, this was one couple a lot of folks out there were rooting for.

Poehler gushed about Kroll in her memoir Yes Please in a way that only she could gush. In the 2014 book, she wrote of her then-main-man,

I have a boyfriend who knows how to settle me. He puts his hand on my chest and tells me boring stories. On one of our first nights together, I woke up apologizing for my snoring and he pulled out two earplugs he had worn to bed so he could hear what I was saying. It was one of the most romantic gestures I have ever seen.

For Kroll's part, he bragged in an interview with Refinery29 about how Poehler was "obviously so funny" while playing a part on his Kroll Show. It can be assured that he got extra points for his openness to showcase a whole bunch of female comedians in his show, not just his significant other. If there is one thing we know about Poehler, it is that she is all about uplifting powerful, funny women, so the fact that Kroll was doing the same made them seem all the more perfect for each other.

And let us not forget how adorable they were whenever they made a public appearance together. It was tough not seeing them together at the most recent Emmys, especially since they were dates last year. And it will likely be tough not seeing them hand in hand moving forward. But perhaps it is best to keep in mind that if it truly was meant to be, it will be. (Fingers crossed that it is!)