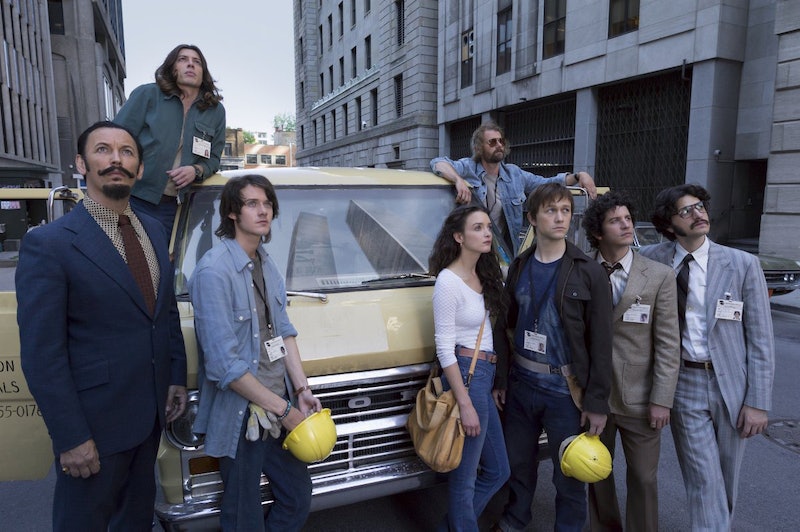 In 1974, a 24-year-old French performer named Philippe Petit was arrested after rigging a high-wire between the twin towers of the World Trade Center and walking back and forth on it for 45 minutes, 1,350 feet from the New York City street below. The stunt has already been memorialized on film in the Oscar-winning documentary Man On Wire. On Sept. 30, a narrative adaptation called The Walk will debut on IMAX 3D screens before a general release on Oct. 9. Joseph Gordon-Levitt donned a shaggy hairstyle and a French accent to play Petit, who is now in his 60s and a renowned artist living in New York City. What does Phillipe Petit think about The Walk , especially Gordon-Levitt's performance?

Though the Inception star is taking over the height-conquering duties this time around, Philippe Petit is a definite presence in the movie. Like the documentary, The Walk uses Petit's autobiography To Reach The Clouds as source material. And to add to the authenticity of his performance, Joseph Gordon-Levitt actually spent a week and a half taking private wire-walking lessons from the artist himself, The New York Times reported last week. In learning the craft, the actor and Petit also bonded over the catharsis they both find in it. Gordon-Levitt told the publication that Petit impressed on him that it's "important to remember the warm memories, the beautiful things about whatever it is that you’ve lost."

The New York Times also reported that director Robert Zemeckis's first concept of the film didn't involve Gordon-Levitt at all. He had consulted with Petit about the artist potentially playing himself. Zemeckis, who worked with performance capture most notably in Polar Express and A Christmas Carol, would have used effects to return Petit to his youthful appearance. That version of the movie didn't take shape, but the subject is full of praise for the actor portraying him.

"I want to say that you caught the very right spirit of me - this sense of adventure, this sense of victory," he says to Gordon-Levitt in this Fandango featurette.

Philippe Petit has been supportive of the filmmaking process and now The Walk's promotion. His official Facebook page and Twitter profile share links to press coverage of the film; trailers; and screening times. He's making appearances at select showings and stepping in for post-movie Q&As. Next up, The Walk opens the New York Film Festival, and Petit will be on hand with the stars and filmmaker. According to his Facebook post, he's "looking forward to an exciting night."

Gordon-Levitt elaborated in an interview with Vulture on what Petit's involvement brought to his performance and, on a larger scale, his personal approach to life's challenges:

The thing that really speaks to what Philippe is like was, when he was teaching me how to walk on the wire, he had this bell, called the victory bell. Whenever he would spot a little bit of progress, he’d say, “That was a victory! Go ring the bell!” You’d have to run across the room and ring the bell in victory. It seemed ridiculous, but it’s about focusing on the positives, and that’s right at the core of who Philippe is and why he was able to accomplish such great things.

Petit's response? "Joseph Gordon-Levitt, you rang that Victory bell many times," he wrote on Facebook. "Deservedly–BRAVO!"

It's safe to say that Philippe Petit is already The Walk's biggest fan.