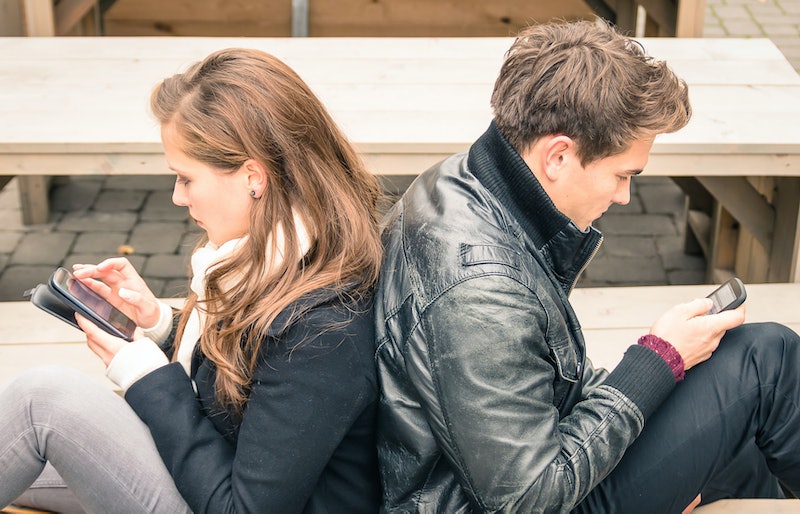 Britney Spears said it best: "I'm addicted to you... Don't you know that you're toxic?" The thing is, you probably don't. Because just like anything else in the world, it's hard to identify something when you're in it, and that holds true being in a toxic relationship. Not to mention the fact, there's this little thing called commitment and another thing called loyalty. In other words, this relationship is your investment, and you've worked hard at it, and you certainly don't want to sell your shares of that stock.

Unless, that is, they're really plummeting. Or worse, hit rock bottom.

Although this can be a hard thing to admit, don't be afraid to actually do it. And then when you do, don't be afraid to break up. To stay in a relationship that's emotionally destructive is never a good move and can leave you feeling emptier the longer you stay in it.

Not sure if your relationship qualifies? Never fear, below are the sure-fire signs your two-some could be treading some very toxic waters. And if it just so happens you are in a toxic relationship, don't feel bad — it's almost guaranteed you'll feel feel like your true self again when you're finally out of it. The only thing you may have to worry about is kicking yourself too hard for not doing it sooner.

1. You've Put Your Life On Hold

There's a big difference in when you put your life on hold because you're in that disgustingly cute honeymoon phase, or when it's just not a phase. The latter is the one you should worry about in this case. If you've barely seen your friends, borderline feel like you're becoming his therapist, or stopped doing your favorite Pilates class because "he hates when you're not home after work," or can't remember the last time she even asked about you — that's not good.

Every plan you make is because they want to do it, and you've been there for them so much you could start billing an hourly rate. Wait, do you even remember the last time they asked how your day was? If you even have to think about that right now, just no.

One of the worst things someone can do is that master manipulation Jedi trick that magically transforms every fight into a guilt trip that leaves you feeling absolutely terrible — and worse — probably apologizing. If you're nodding your head right now, do two things: 1. Get up. 2. Walk out the door.

4. Making A Change In Your Life Is Discouraged

Whether it's as something as minor as a haircut, or as major as a career swap, your partner should both encourage and support you making a change in your life. If every new idea you have is discouraged, it will not only make you possibly miss out on opportunities that could enrich your life, but also make feel more negative about change as a whole. No bueno.

5. You're Avoiding The Elephant In The Room

Look, some people seldom want to talk about it, but avoiding the problem forever will not make it go away. And if your significant other never even wants to address the issue, how good of a life partner can he or she really be?

6. You Don't Feel Good About Yourself

This is perhaps one of the most important things, that only you can really answer perhaps one of the harder questions to ask: Do you like yourself right now? It's possible you've become someone else in this relationship, someone you may not even like. And if you don't love yourself, you can't possibly expect to love someone else the right way. Not to get all Sex and the City on you, but the relationship with yourself is the most important one of all time, and if the person you're with is somehow wrecking that sacred bond, than it's time for the ol' heave home.

7. You Can't Remember The Last Time You Were Happy For An Extended Period Of Time

This can be difficult to determine, but likely the most telling. When was the last time you two actually enjoyed each other? And not just between the sheets (although, it's possible that has taken a bit of a nose dive too, at least the "not using it as a weapon" kind.)

Seriously, gave you felt uplifted by teach other, have you gotten lost in the moment... Do you even like being around each other that much? Don't be afraid to say no, and then get the hell out, because unlike what Britney says in her song, you don't want to "taste the poison paradise" — at least not longterm.

More like this
20 Things You Should Never Tolerate In A Relationship
By Rachel Sanoff and Kathleen Ferraro
The Best Time To Date After A Breakup, According To Experts
By Bustle Editors
12 Ways You're Sabotaging Your Love Life
By Teresa Newsome and Lexi Inks
Why A Relationship Timeline Isn't Necessary For Everyone
By Lexi Inks
Get Even More From Bustle — Sign Up For The Newsletter