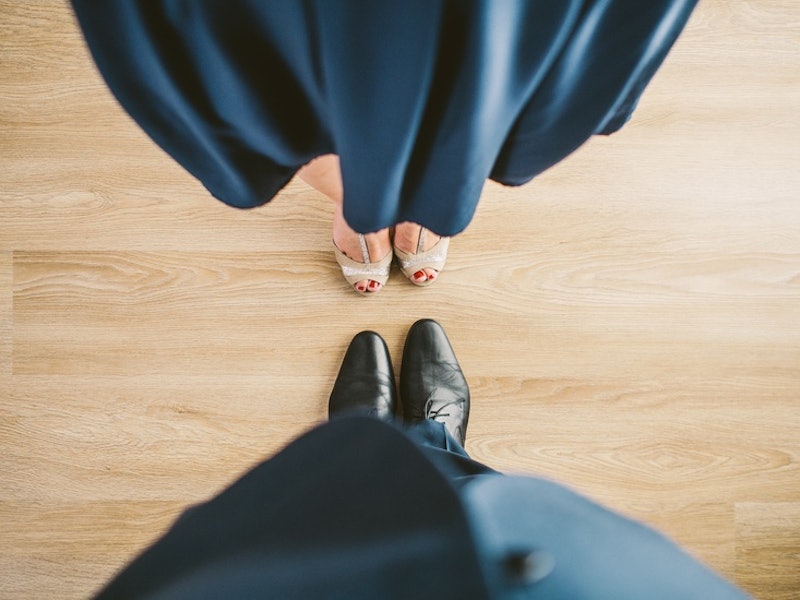 For most of us, the seven-year itch comes long before seven years. Yes, the end of the honeymoon period is a real thing. A 2014 study published in the journal Prevention Science looked at 400 couples in the first two years of marriage and found that after 30 months, 14 percent of men and 10 percent of women experienced the honeymoon period. After this point, their marital satisfaction drastically dropped.

But the post-honeymoon phase phenomenon doesn't just apply in cases of actual matrimony. Every couple goes through a loved up honeymoon-ish phase toward the beginning (it's normally that time where your friend annoyingly disappears off the face of the earth) and then things sort of return to the real world. Sometimes it's a smooth transition and sometimes, not so much. If you find yourself being tetchy for no reason, a bit blah, or being annoyed by things you used to find cute, chances are the honeymoon phase has ended. It's nothing to panic about— it happens to pretty much everyone. It's just time to think about how to move forward without letting relationship lethargy or annoyance take over. Try to be clearheaded about it, don't get down, and focus on everything you can do moving forward.

Here are seven things to help you get over falling out of the honeymoon phase:

1. Be Honest About What's Changed

Rather than just feeling like everything is just less fun that is used to be, try to be objective and figure out what's actually different. If you know what's missing it'll be a whole lot easier to get it back.

Get the spark back by sparking things up a bit. Maybe it's not realistic to keep up the "I just can't keep my hands off of you let's do it 10 times a day" mentality of an early relationship, but make sure it doesn't fall completely by the wayside. Try a new position, some sexy new clothes, doing it outdoors— something to keep things sparky.

3. OK And Some Romance

Alright, not all of you are the sex pest that I am, I get it. Maybe the sex isn't as important and if you feel like the romance is gone, then try to get that back. Maybe for you that means a nice dinner out, or maybe it's some quality couch time just the two of you. Whatever romance and intimacy is to you, put some time into it.

4. Do Something Completely Different

If you try to up the sex and romance and it's still just feeling like a shadow of you're early relationship frenzy, stop trying to recreate it. You're in a new stage in a relationship so try a new activity or a routine to go along with it. So it may not be the honeymoon phase anymore, there are a lot of fun things you can bring into it going forward.

It's new, it's different, it's romantic — it's a whole new place. Especially if you're feeling a dip after an actual honeymoon, going away just the two of you again can be a good way to remember how great it was.

6. Ask Yourself If It's Just A Fling

Like I said, most relationships will have a dip after the initial starry-eyed period and it's nothing to worry about. But if you went from being head-over-heels, nonstop sex and doe eyes and now realize you actually have nothing in common and just don't like each other as people? Call it what it is. You had an awesome fling, now let it go.

Just because you may not be so over the moon doesn't mean that things are actually worse. Sure the all night-conversations may be a thing of the past, but you're probably not holding in your farts anymore. Or feeling worried about showing what a weirdo you are. Or pretending you like that thing in bed you don't really like that much. Look at the positives— there's a lot of good that comes with feeling a little more comfortable.

Want more of Bustle's Sex and Relationships coverage? Check out our video on what it's like to be a bridesmaid for hire below: