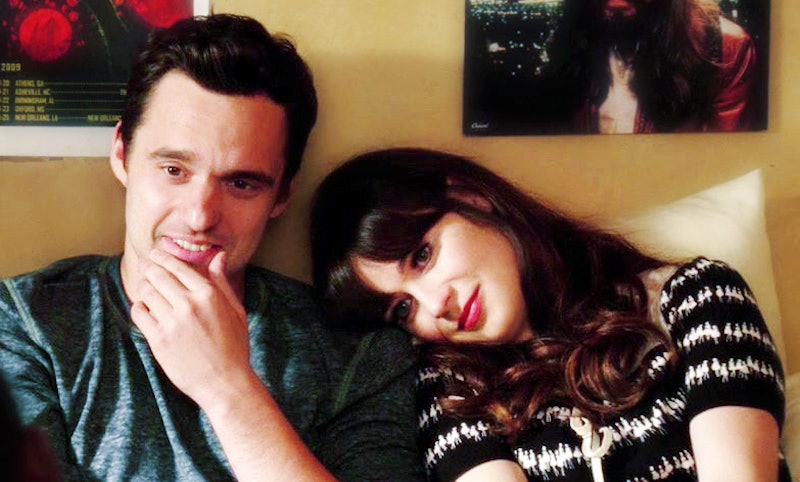 If you've used the phrase "Oh, he's just my friend!" to describe a close acquaintance, you should listen up, for I used to be one of you — the girl who friend-zoned someone so hard, that all aspects of love should have gone out the window. Dating your best friend may seem intimidating, but it can also be the best decision of your life. My now-husband and I both involved ourselves with many different romantic relationships before giving our friendship a shot at something else, and I feel like if I didn't consider dating my best friend, my life would be drastically different (and probably way sad).

"But Karen, I'm not attracted to my best friend!" you might claim, as you prepare a list of romantic laments that you plan on sharing with your bestie during your daily call time. It's because you've already labeled him or her as something else. The most attractive qualities in another human, I've learned, is the barrage of support they have given you throughout your life, as well as the years of history between the two of you. Just imagine him as a partner, just one time, and see if your perception changes a bit. Unless, of course, you prefer the challenges of trying to meet and connect someone who doesn't know anything about you.

While I don't regret the romantic misadventures I had before things clicked with my best friend and I, I definitely wish I could go back and tell myself that dating didn't have to be so difficult, or so heartbreaking — the key to true happiness was right in front of me the entire time.

Check out Bustle's 'Save The Date' and other videos on Facebook and the Bustle app across Apple TV, Roku, and Amazon Fire TV

Here are a few more perks of dating your bestie.

He already knows your favorite color, and he understands your personal views of the future. And since this "first date" was likely a friendly hangout, this information was revealed without anxiety or nerves. Obviously you know that he likes hanging out with you, so you don't have to interpret vague texts or lament with your girlfriends about the issue.

First dates are the absolute worst. By dating your best friend, you've already moved past all of the "getting to know you" awkward parts.

Meeting parents is massively stressful, but if this guy has hung around you enough, he's already familiar with your mom and dad. And unless your parents ever pulled you aside with advice like, "I don't trust this hooligan!" he already gets the parental seal of approval. In fact, if you mention the relationship to your parents, you'll probably get the response of "Finally!" or "It's about time!" or "So when will we have grandkids?" (One step at a time here, Dad.)

3. You both have a lot on the line

Granted, there's a chance that the two of you might just be a romantic mismatch. And there's a chance that this failed experiment might tarnish the friendship entirely. It's a scary situation! This has been your go-to guy for years, so you can't even imagine the possibility of removing him from your life if there's no love connection.

Your best friend is also scared about this possibility, but you know what? You're worth the risk. Knowing that this relationship will probably move much more quickly than the guy you successfully swiped on Tinder is a reality that both of you will face, but if you both agree to take the steps, you're both (as Luke Danes might say) "all in."

And, hey — It could also end up being a Jerry and Elaine situation, which would also turn out pretty amazingly.

4. He already knows about your past relationships

Unless you just met him and bonded instantly, he's probably seen — or at least heard about — your dating disasters of the past. And, likewise. You've probably heard about how his last girlfriend was possessive, or needy, or crazy, or in a secret cult, or all of the above. While these events may have been traumatizing for the both of you at the time, the positive spin is that you both know what doesn't work in a relationship with the other person. This is key in starting a happy and healthy new relationship. So, if he knows that you were dumped due to an ex's cheating ways, he'll obviously know that you'll be ultra sensitive on the issue, and won't even make jokes about the matter.

5. You know that you already have a ton in common

Obviously there's a shared interest or two which caused you to meet up in the first place. Or, maybe it was a mutual friend who brought you together. Whatever it is, you know that a lot of your interests are aligned. If they weren't, you would have hid him on Facebook the second that feature became available. Especially if he's somewhat of a social media over-sharer.

If you both bond over something, dates won't be as hard to plan. For example, if you're both psyched about the outdoors, a hike will never be boring. If you both like music, you can always check to see who's playing at the local club. A date can simply be an event you've wanted to check out anyway, and probably would have, regardless of your romantic status.

Let's face it, we've all got one (or 12). He might joke about your gross (yet satisfying) nail biting habit, or he's probably aware that one glass of wine too many makes you weirdly political in social settings.

When you're dating, you're just cringing over anticipation of the moment when these habits come to light. You'll be wondering if whether or not eating scoopfuls of peanut butter from the jar will be his dealbreaker, or if the fact that your socks are bunched together like a pile of unmatched nightmares will turn him off. Your best friend accepts you for you. And it's such a good feeling.

7. He makes you feel really good about yourself

If he didn't, you wouldn't hang out with him. Your mood is elevated during his presence, even if it's when you're doing something stupid like snarking on movie selections. He's the first one you call when you're down, and no matter what, he always knows what to say.

8. He's seen you under-dressed a billion times, and likes you just the same

How many times have you switched shirts before a first date? It's super doubtful that a date would have gone differently if you chose a V-neck tee instead of round neck tee, but the paranoia that sets in regarding wardrobe selection will definitely make you nutty.

Your best friend has seen you in all types of tees — the one you got from a Walk-A-Thon back in 1997, the one you accidentally puked on during a horrible party a year or so ago, and the one that is two steps away from being a dust rag. In your head, you didn't feel the need to "try" in front of your best friend — you were just you. So, while you'd love to still dress up for special dates, you know that one false move won't change anything.

More like this
25 Questions To Ask Your Friends When You're Bored
By Lexi Inks
15 Ways To Tell Someone Was Just Talking Behind Your Back
By Carolyn Steber
Are Gemini & Scorpio Compatible In A Relationship?
By Kristine Fellizar
The Most Compatible Life Path Numbers, According To Numerologists
By Kristine Fellizar
Get Even More From Bustle — Sign Up For The Newsletter