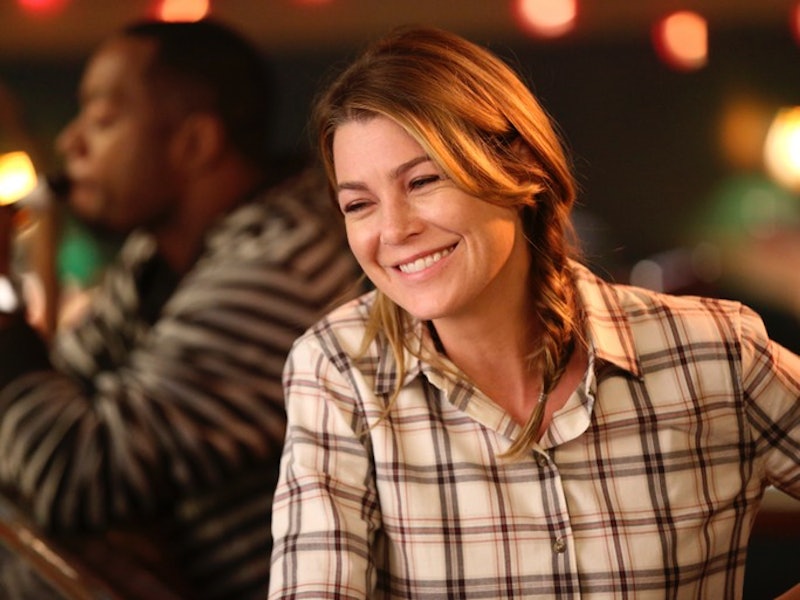 An entire summer has come and gone, but I still don't think that's enough time to process my feelings about Grey's Anatomy. Sometimes, I forget that Derek Shepherd is dead, and then I have to relive it all over again. And, now that Meredith's taking on her life with one extra baby and no husband, things are definitely going to be different when Season 12 premieres this Thursday. Season 11 was crazy, y'all, especially the emotionally traumatic final two episodes. If your brain blocked it all out to protect you from permanent damage, I get it, and I decided to take one for the team. Here's a recap of Grey's Anatomy Season 11, which I relived so you don't have to.

Warning: Should you decide to hit up Netflix to watch the season again, watching Derek die is the worse the second time around. Like, even more heartwrenching than when the episode aired originally — if that's possible — so prepare yourself. So many things are about to be different this time around — no more Derek, no more McDreamhouse, and a brand new crop of interns is taking over.

Here's everything you need to know before #TGIT is back on Thursday:

April & Jackson Are At A Major Impasse

Last season, they were pregnant and super excited to welcome their first baby, Samuel, into the world. But then, they received a tragic diagnosis that meant the baby would die minutes after birth, and, obviously, losing her baby like that sent April over the edge. She and Owen left to work with the military, and she loved it so much she didn't come back for a long time. In the finale, Jackson offered April an ultimatum: She could continue her military work and lose Jackson, or she could come home and work on their marriage. No word on what she decided to do, but it definitely doesn't look good.

I don't even want to think about the fact that Callie and Arizona are split up (and probably will never get back together again), but it's still happening. They tried to work with a marriage counselor, but between Callie enjoying the time she spent on her own so much and Arizona getting so wrapped up in saving Dr. Herman's life, they ended up deciding that they're better off apart.

In Season 11, Meredith met her secret biological sister, Maggie — the lovechild of Ellis Grey and Richard Webber that nobody knew existed until now. Despite the fact that they didn't get along at first, they're now starting to forge a sisterly bond, and the same thing is happening with Derek's sister, Amelia, who's now a full-time surgeon at Grey Sloan Memorial. Oh, and she has a thing with Owen, but who knows where that storyline is going to go.

And, In Case You Forgot, Derek Died

Remember that time Derek was in DC, working on a brain mapping project for the President? As soon as he quit to be home with Meredith and the kids, he was involved in a car accident that ultimately landed him in a hospital full of incompetent doctors, where Meredith had to take him off of life support — as if that girl hasn't been through enough over the past 12 years.

And, Now, We're A Year Into The Future

Meredith skipped town with her kids and found out that she was pregnant — with Derek's baby, of course. Eventually, Alex found her and brought her back home after she spent a year dodging his calls, and she ended up moving back into her old house. When Meredith, Maggie, and Amelia all moved in together, Alex and Jo moved out and got their own place, because they are adorable and they will stay together forever, despite the fact that I should no longer trust Shonda Rhimes at this point.

Knowing all of this, I should probably stop watching Grey's for the rest of my life. But, somehow, no matter who they kill, I'm always back for more. See you Thursday, Grey's Anatomy, no matter how much you hurt me.

More like this
We Finally Know When 'Grey’s Anatomy' Is Coming Back
By Brad Witter
Sandra Oh Says Early ‘Grey’s Anatomy’ Fame Caused Her To Get “Very Sick”
By Brad Witter
Everything We Know About When To Expect Money Heist: Korea Part 2
By Kadin Burnett
Wait, What’s Going On With Ben In That Umbrella Academy Season 3 Post-Credits Scene?
By Gretchen Smail
Get Even More From Bustle — Sign Up For The Newsletter