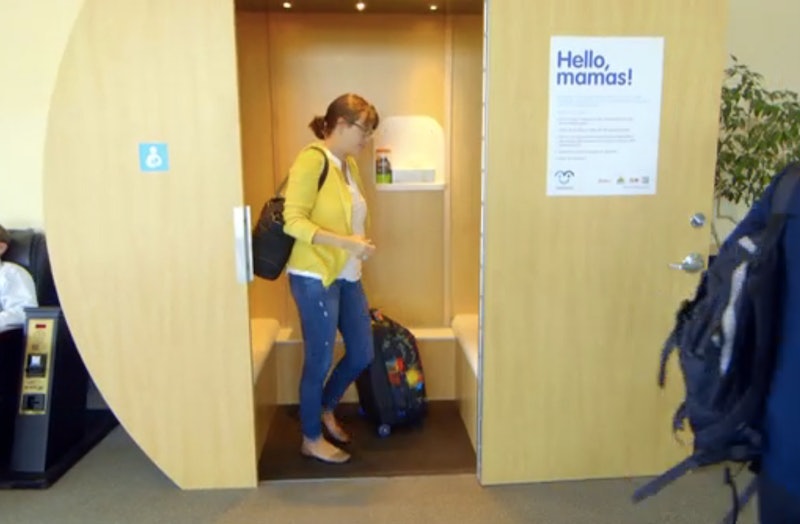 The Minnesota Vikings announced Tuesday that they are about to become the first NFL team to install breastfeeding suites in their stadium. The move is a major step forward for the team’s female fans, and for its fan families in general. Breastfeeding is hard work, and it’s even harder for women in public, who often have to cope with a lack of proper facilities (many have to breastfeed or pump in bathrooms) and put up with other people’s (uncalled for) judgment. Breastfeeding pods like the two to be installed in TCF Bank stadium, where the Vikings are playing while their new stadium is built, will give nursing mothers a quiet, clean space to breastfeed or pump before going back out to enjoy the game. The new stadium will also have a lactation suite, and breastfeeding pods will be installed at the Viking’s corporate offices and training facility.

The 4-foot-by-8-foot breastfeeding pods were created by Mamava. The Mamava pods, which can also be found in a number of airports and businesses, are lockable freestanding rooms that each feature two benches, a table, and an outlet for plugging in a breast pump. In a press release, Vikings Chief Operating Officer Kevin Warren explained,

While we certainly encourage breastfeeding mothers to nurse where they feel comfortable, we have become increasingly aware of the need many moms have for the privacy and comfort that these Mamava lactation suites provide. In addition, we are always striving to create the most positive workplace environment within our organizations and the pods at our two headquarters will benefit many of our female employees.

Hopefully, the Viking’s decision to set aside space for their nursing fans will encourage other professional sports teams to do the same. Right now, the Vikings are in the company of only a few other teams: The Washington Nationals and the Cincinnati Reds have breastfeeding lounges in their stadiums, and there is a Mamava pod at Fenway Park, home of the Boston Red Sox.

Check out this video to see a Mamava pod in action: