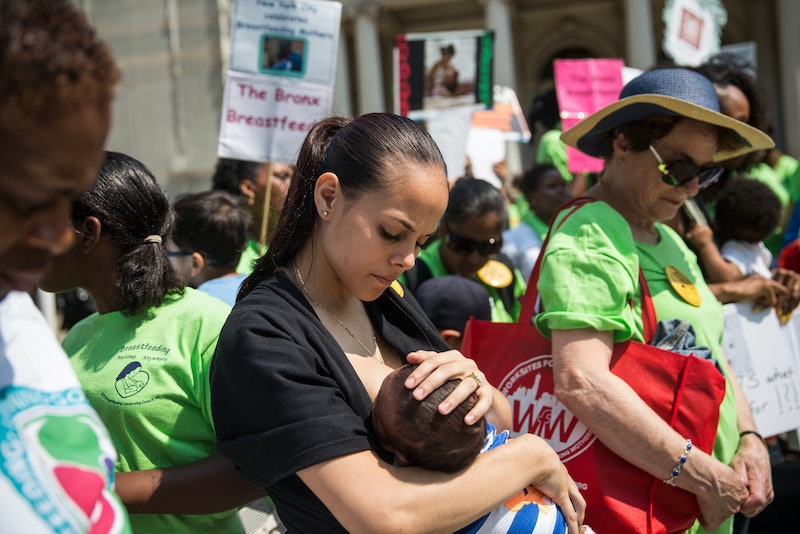 Just to state the obvious, being a new mom is incredibly stressful. There are so many things you don’t realize you don’t know how to do until it becomes time to actually do them. Often, learning to breastfeed is one of those things. I thought that nursing my child would come naturally to me because, well, nature? Women have been feeding their kids since humans appeared on this planet and our species is still alive so it can’t be that hard, right?

But that wasn’t the case for me. Not only did I have to get the hang of breastfeeding, but I also had to figure out how to do it with a (perceived) audience. I know so many new moms who were terrified to go out because they were scared to nurse outside the privacy of their own home. Nursing in public is the final frontier of breastfeeding for many of us, the biggest hurdle we have to overcome during the adjustment phase of getting used to being a mom.

Here are some tips to help make it a little bit easier.

Every state except Idaho has a law that states women can legally breastfeed in public. For me, knowing this made me feel more confident nursing in public. I’ve prepared myself to be able to say, “Massachusetts law says that I can nurse wherever I can legally be” if anyone tries to ask me to cover up or leave their establishment. It’s never happened, but I have my rights ready to be announced, if need be.

2. Wear the clothing you're most comfortable nursing in.

Fumbling with shirts and nursing bras is HARD, you guys. Find a nursing bra you like (for me, I had trouble dealing with the clips and hooks so I got one I could just pull down) and practice nursing with it while you’re at home. Find tops that are easy to nurse in — I prefer shirts that button down the front or that I can just pull down — for easy and swift access. Others swear by the two-shirt method: wearing a nursing tank under a shirt. Then you just pull the shirt up and the tank down and voila! Public nursing without exposing anything at all!

3. Remind yourself that you’re feeding your child.

Nursing in public shouldn’t be a big deal. But we live in a world and a culture that has sexualized women’s bodies to the point that we can’t even use our breasts for what they’re meant for without it being seen as sexual or obscene. I found that, at the beginning, repeating, “I’m just feeding my child. I’m just feeding my child” to myself over and over again helped. So did avoiding eye contact with folks and focusing on my baby.

Look, if you prefer to nurse in public with a cover, I’m not going to tell you you’re doing it wrong. But I am going to encourage you to reconsider. When I first started nursing out and about, I felt like I was doing something wrong, even though I knew logically that I wasn’t. For me, covering up added to the shame and made me feel like I had to hide what I was doing. Not using a cover was reinforcement for me (and the people around me) that nursing my kid was nothing to be ashamed of.

5. Remember that only you own your body.

In the same way that a woman in a short skirt is not asking to be harassed or raped, a woman nursing in public is not asking for stares or comments. Just because you’re in public, your body does not become public property. It’s still yours to do with what you want — including feeding your child.

Breastfeeding is a superpower — and don’t you forget it! If someone looks at you weird while you’re nursing just think (or say, if you’re brave enough!), “I’m sustaining human life over here, motherf*&ker! What are you doing? Drinking a latte? Yeah, that’s what I thought.” Think about it: your body is incredible enough that you can sustain another human’s life with just the substance produced entirely from your body. Do it proudly, momma!

7. Remember that every time you nurse in public, you give another mom permission to do the same.

Breastfeeding in public spaces makes a difference. Feeding your kid shouldn’t be a political act but, at least for right now, it is. When you nurse in public, other people see you and the behavior is normalized. And every time you do it, you make it easier for other women to do the same. You can even take it one step further and post a breastfeeding selfie (a #brelfie) with the #normalizebreastfeeding hashtag!Personally, I found nursing to be an incredibly powerful experience. I fell in love with my body and what it could do. And the more I nursed in public, the easier it got. Now that my daughter is a year old, there’s nowhere we won’t nurse. It seems a little extreme to say that breastfeeding in public can help the change the world, but I believe it with all my heart. It certainly changed mine.Images: madisonella13, elievia, mulletlover, supercheeks13/Instagram