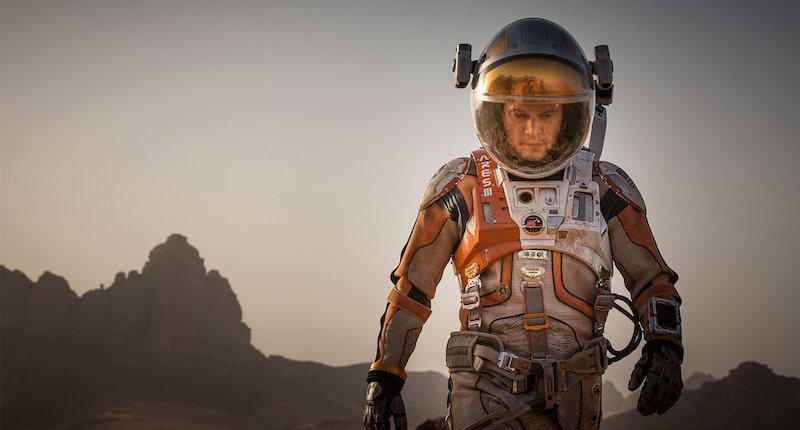 In Ridley Scott's new sci-fi thriller, The Martian, Matt Damon portrays Mark Watney, an astronaut on a mission to Mars. While exploring the red planet, Watney becomes injured in a storm and is left behind by his fellow astronauts, who think he's dead. Now living alone in a habitat that was designed to only last 31 days in a climate harsher than any found on Earth, Watney has to find a way to survive for another four years until rescue from Earth can reach him. This clearly has the makings of a Hollywood blockbuster, but would scientists be proud of Scott's on-screen adventure? How scientifically accurate is The Martian , really?

For the most part, it's pretty good at sticking to the facts. The Martian followed the trend of other recent space-based Hollywood films like Interstellar , Gravity, and Guardians of the Galaxy (OK, maybe not Guardians of the Galaxy) by using input from real scientists during production. One scientist who is definitely on board with the science of The Martian is NASA's own director of planetary sciences, Jim Green, who was a consultant on the film. "I think The Martian is as close to science fact, as any science fiction I have seen in going to Mars," Green told CBS news. But what specifically does The Martian get right?

In the movie, Watney lives in "the Hab", a space habitat designed to temporarily house astronauts on Mars. The Hab is based upon a similar habitat currently in development at NASA called "HERA" (Human Exploration Research Analog). HERA is designed to house astronauts on longer space missions for 14 days, with plans to boost that time to 60 days in the near future. So far the habitat has only been used in Earth-based simulations, but it or something like it could one day be used on Mars.

If Watney's going to survive for four years in a place without any food, he's going to have to figure out a way to grow some. And that's just what he does; he grows a field of potatoes within his habitat. In real life, actual astronauts have recently grown lettuce aboard the ISS using a system called Veggie that uses different colored LED lights and fortified seed "pillows" to grow food in space. NASA is currently looking at expanding its menu to create more nutrient-rich foods for astronauts in case of a future event where regular food deliveries won't be possible (like, for instance, a manned mission to Mars).

Mars obviously doesn't have the atmosphere of Earth, so Watney has to figure out a way to get oxygen or else he's not going to last very long on the planet. He uses an "oxygenator" to create oxygen from the carbon dioxide released from the fuel in his Mars Ascent Vehicle. Astronauts aboard the ISS use a similar system, called the Oxygen Generation System, that separates oxygen from water and feeds it into the air.

Watney obviously needs to drink water, and last I checked Mars wasn't overflowing with the stuff, so he'll need to recycle his H2O. Aboard the ISS, astronauts already use a water recovery system that turns every drop of used water, sweat, and even urine into drinkable water. Yum!

In order to make water, oxygen, and food, Watney needs power, which he generates using a Radioisotope Thermoelectric Generator, a device that uses decaying plutonium to create electrical power. They're already in use in the current Mars rover, Curiosity, which is how the little fella has the power to send back his adorable melfies (Mars selfies).

Surviving on Mars is obviously a huge chunk of the movie, but there's also the major hurdle of traveling back and forth from the planet. The Hermes ship used in the movie utilizes ion propulsion, a system that electronically breaks down gases and pushes them out at high speeds to create slow momentum that builds over time. It's one of the most fuel-efficient ways to travel, a major importance when going long distances, and is already in use in NASA's far-reaching Dawn spacecraft.

As impressive as films like Interstellar and Gravity were with their scientific accuracy, The Martian looks like it could be Hollywood's most accurate depiction yet of life in space. Add in a huge star like Matt Damon, and you've got a potential blockbuster on your hands.