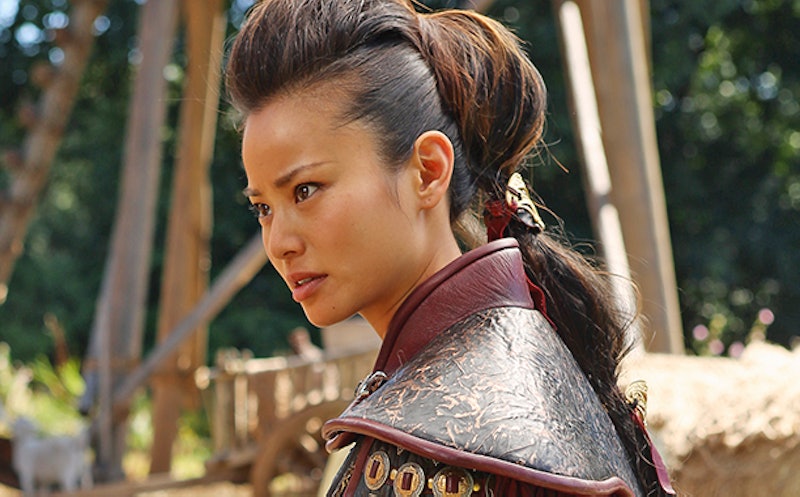 As if the promise of Dark Swan and Camelot wasn't enough to make you excited for Once Upon a Time Season 5, it was also recently announced that Mulan, played by Jamie Chung, would also be returning to the OUAT family in a multi-episode story arc this fall. And while any/all specific details regarding her reprisal are being kept heavily under wraps, Mulan's return is still substantial news in and of itself, especially considering she hasn't made an appearance on the show since all the way back in Season 3, believe it or not. Which is a shame, considering what a big impact she ended up making on the audience.

Not only was her character an instant fan favorite right from the start, but she also served as one-half of a strongly hinted at LGBT relationship with the Princess Aurora. The romance was never fully explored, unfortunately, though it left many hopeful for the future — something that's looking more and more possible now that we know, courtesy of Entertainment Weekly, that executive producers Adam Horowitz and Edward Kitsis are looking to explore a LGBT relationship this season — a first for the ABC series. Perhaps that's even the main reason for our young warrior's return. (*fingers crossed*)

But regardless of why she's coming back, I'm even more curious to know exactly when it will happen. As of now, no official starting episode has been confirmed, however, we do know that she'll appear in both Season 5a and 5b, thanks to a recent tweet Horowitz posted.

Unfortunately, IMBD was unable to offer up any further clues since the last episode that have Chung booked for is back in 2013. That's not to say, though, that there aren't other ways you can go about predicting when she'll be back. For instance, Horowitz also tweeted that the title for Season 5's seventh episode is "Nimue," which — if you look it up — translates to "Lady of the Lake." How is this tied to Mulan, you may ask? Well, if you recall, she appeared in an episode of Season 2 wit that very same title: "Lady of the Lake." Maybe this is Horowitz subtle way of hinting at her return.

Or, you know, maybe we're reading way too much into this. But considering that Mulan will be in both halves of the season, I'd say she'll probably show up around the Episode 7 or 8 mark, which means we still have a few more weeks of waiting ahead of us, though we all know by now that this character is well worth it.

More like this
'Gilmore Girls’ Lauren Graham Just Revived Our Hopes For A New Reunion
By El Hunt
Ava DuVernay Thought The 'Queen Sugar' Series Finale Felt “Really Satisfying”
By Brad Witter
Will 'The Walking Dead' Return For Season 12?
By Grace Wehniainen
The 'Kenan & Kel' Reunion On 'SNL' Took A Dramatic Turn, Thanks To Keke Palmer
By Brad Witter
Get Even More From Bustle — Sign Up For The Newsletter