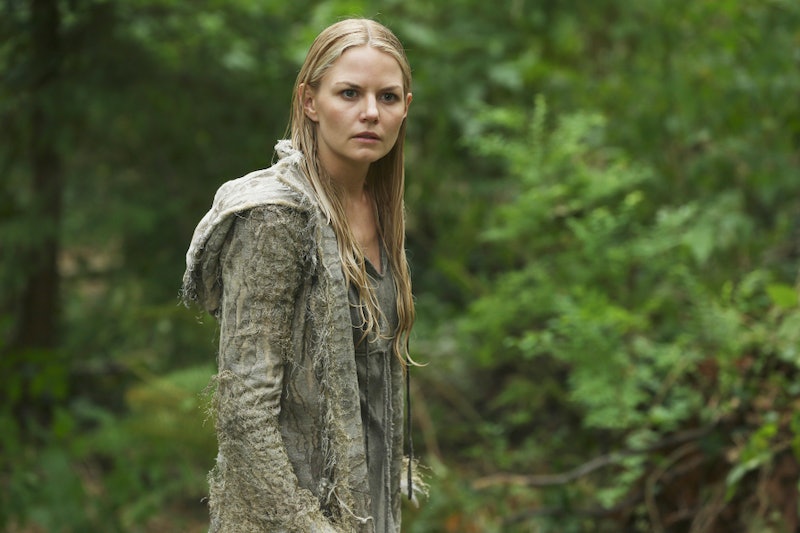 We all knew that the Once Upon a Time Season 5 premiere was going to be an action-packed affair, but I doubt even the most obsessed viewer was able to predict the interesting twist this series had in store. The Dark One's dagger is a broken off piece of the Sword Excalibur, which really helps to explain not only why the dagger is so powerful, and also how Emma can potentially be saved. You see, initially we thought that finding Merlin would be the key to banishing the Dark One's powers from Emma before it completely consumes her. But what if the solution begins and ends with Excalibur itself? What if making the two halves of this sword whole again is the only way to banish the Dark One for good and end the curse?

According to the folklore, the sword's blade had an engraving on both sides, one of which reads: "Take me up," while the other says: "Cast me away." Perhaps the writers will weave this famous inscription into the story by having it represent what Emma is supposed to do in order to defeat her inner darkness. If the two pieces are put back together, then maybe the wielder of the sword could "take it up" and cast away the dark power for good. But not just any wielder, though. Given how much OUAT loves a good redemption story, I'm thinking that the only person who can destroy the darkness would be the Dark One herself.

Emma would have to willingly give up all that power, which as we can see already, can become pretty addictive. I mean, just think of all the times she almost "accidentally" killed Merida and that was just on her first day as the Dark One. It would take a person of noble heart (one might even say, a Savior?) in order to overcome such a great temptation. The usher in the movie theater warned Young Emma that she should stay away from Excalibur, but maybe that's because he underestimated her strength and inner-goodness. Or, he's less friend and more foe.

Then, of course, there's always the possibility that joining Excalibur with the Dark One dagger would do something else instead… like help in finding Merlin perhaps. King Arthur told Emma by episode's end that she has an important part to play in reuniting him with Merlin, who has been missing for many years. What if Merlin is trapped within the sword or dagger and only by reuniting them can he be set free? I may be grasping at straws here, but given that this show prides itself on spinning straw into gold, I'd say anything is possible.