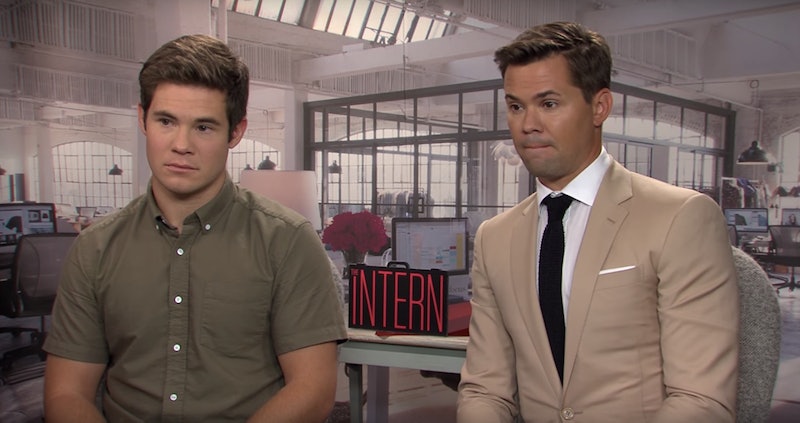 Despite being a hugely successful director whose movies have made more than a billion dollars worldwide, Nancy Meyers is still considered a "chick flick" director, a filmmakers whose movies are only ever about, and for, women (as if there's something wrong with telling female-led stories). Male viewers aren't exactly her target demographic — which is why I asked Adam DeVine and Andrew Rannells, stars of her latest movie, The Intern , why men should go see Meyers' movies anyway.

"A good movie is just a good movie," says DeVine immediately, with Rannells quickly agreeing — and The Intern is just that. Starring Anne Hathaway as a fashion CEO and Robert De Niro as her out-of-retirement intern, the movie is one of Meyers' best, smart and funny and sweetly moving (not to mention set design heaven — the director never disappoints). DeVine and Rannells play two of Hathaway's character's employees, and they provide some of the movie's biggest laughs — not surprising for actors best known for Pitch Perfect and Girls, respectively. These guys know comedy, and in Meyers' new film, their talents are put to seriously good use.

Watch the actors discuss their love for their new film (and reveal all the singing they did on set) in the interview below, and catch The Intern in theaters on Sept. 25.