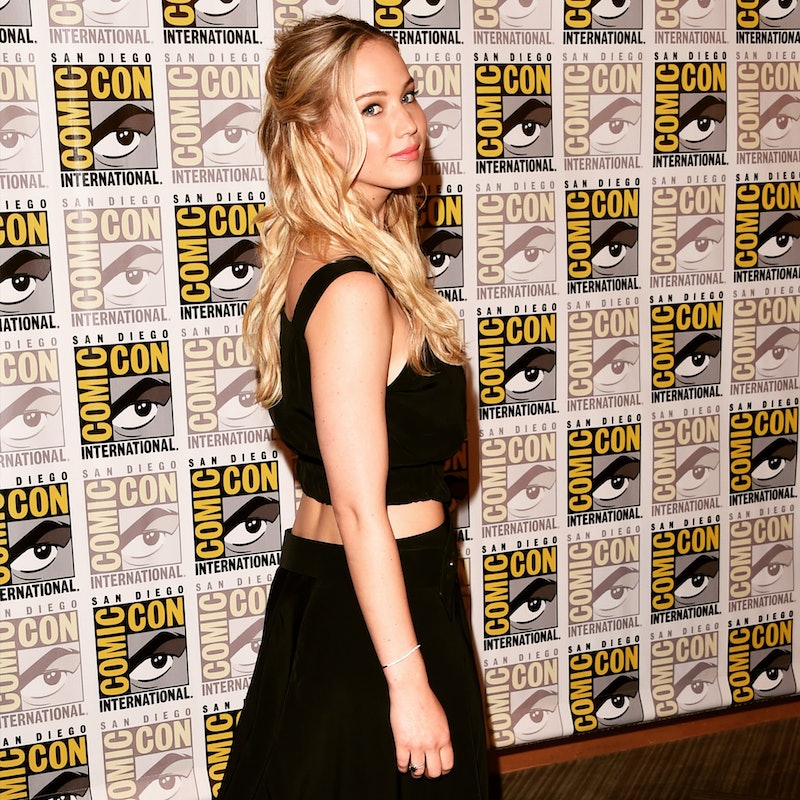 America's Girl Crush has gone and changed her hair again. Jennifer Lawrence is now a platinum blonde, showing off her bombshell side. The actress, whose coif has evolved drastically as her fame skyrocketed, going from long layers to a chic pixie, was photographed with her bright blonde locks while on a film set. J. Law is filming Passengers in Atlanta. While the platinum shade is reminiscent of Hollywood screen sirens, it's not too mature nor is it stuffy because J. Law is wearing it well.

The Oscar-winner and lovable klutz, whose red carpet falls have become the stuff of legend since she is able to laugh at herself during a potentially embarrassing situation, had been growing out her short 'do this year.

I am stoked about that. I admit that I have always preferred her longer locks and thought that her shorter, overly styled hair, as seen at the 2014 Oscars, was decidedly less fun. Yes, she remains a knockout no matter how she styles her hair. But the short 'do aged her a bit.

This white blonde shade is everything. It's super light and young. It's also not really drastic, either, since Lawrence has been steadily lightening her hair this year, as well.

Feast your eyes on the newly-platinum Lawrence.

Beautiful, right? It might have been for her role. But whatever the case, it slayed.

How about we do a quick run through of J. Law's locks in 2015? You can see that she has been showing lighter, longer locks as recently as the summer.

J. Law returned to a long, layered, and lighter coif this summer. It's likely supported by extensions, but it is one of her early signatures.

She was basically channeling herself and her 2011 Academy Awards 'do.

The long, beachy waves, which she also showed at this summer's Comic Con, made her look at least five years younger.

Who is this bombshell? That slinky, liquid metal dress and those goldilocks amounted to "total sexpot." Lawrence could eat you-know-what and fall on her face right here and still be a consummate babe. You can see that she has been progressively going lighter with her locks.

The big bun sitting on the crown of her head at the Met Gala allowed her to show off the back of this dress.

The whole hairstyle was unfinished and messy, with little tufts poking out. It wasn't slicked back or stiff.

Her shade was darker and the imperfect updo showed off her lovely face.

It was disheveled in the back and therein lied its charm.

This sideswept 'do was elegant in a very J. Law way. Her hair shade was softer and had more depth and warmth than it did by summer.

The face-framing tendrils were so sweet.

She has been lengthening and lightening her hair in 2015! I like the transition.

But then again, the actress could shave her head and she'd still slay. I think her platinum and lighter locks fall right in line with her goofiness.

More like this
9 Valentine's Day Hairstyles For 2023 That Look So Dreamy
By Audrey Noble
Blake Lively Debuts Red Hair For The 'It Ends With Us' Film Adaptation
By Olivia Rose Rushing
The Best Beauty Looks Spotted At Paris Couture Week 2023
By Audrey Noble
15 Modernized '60s Makeup Looks & Hairstyles That Feel Wonderfully Retro
By Olivia Rose Rushing
Get Even More From Bustle — Sign Up For The Newsletter
From hair trends to relationship advice, our daily newsletter has everything you need to sound like a person who’s on TikTok, even if you aren’t.