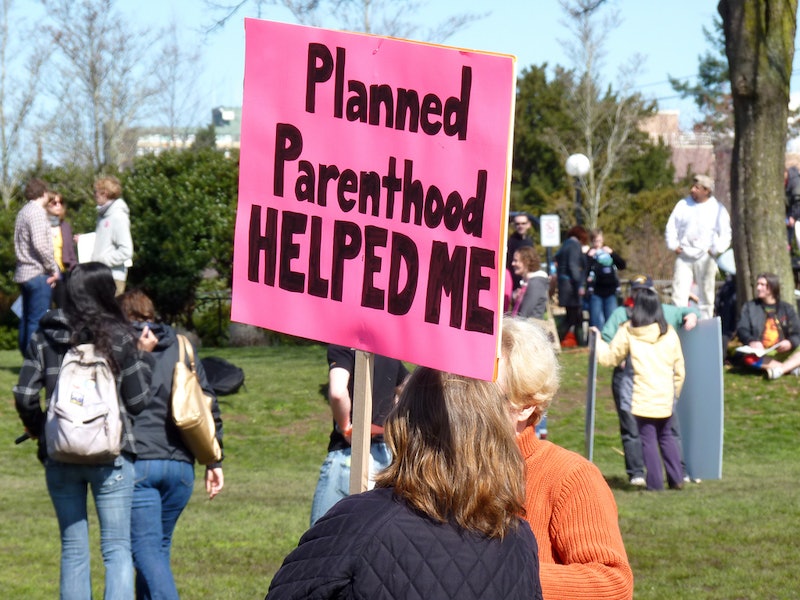 In the midst of a heated feud over Planned Parenthood — with John Boehner announcing only yesterday that a special House committee would be appointed to investigate the health provider, in response to doctored videos falsely accusing the organization of illegally selling fetal organs — 24-year-old Ambarie Stacey Schiefer reminds us exactly why we should support Planned Parenthood: In a Facebook post, the Pittsburgh native explains that Planned Parenthood may have saved her life by providing screenings and biopsies that identified precancerous cells on her cervix. Planned Parenthood’s services eventually led to surgery to have part of her cervix removed in order to prevent the further growth of abnormal cells.

In a post that has since gone viral, Schiefer explains,

At the age of 23, I had surgery to remove part of my cervix to avoid my abnormal cells becoming cancerous. The middle finger I proudly hold high here was a preemptive "fuck you" to any and all who want to make it damn near impossible for someone such as myself, without insurance, to find out that I needed such a surgery and then make it possible for me to get that very important surgery. Without Planned Parenthood, I don't even know where I would be now. I thank them, and thank everyone who supports and believes in them. Thank you. ‪#‎IStandWithPP

In a statement to Bustle, Schiefer said that she first began going to Planned Parenthood “for birth control and basic exams” at the age of 17. Working six days a week, she was making too much money to afford public assistance, but wasn’t able to afford health insurance. Fortunately, she qualified for a health plan at her Planned Parenthood in downtown Pittsburgh. Her doctors first discovered abnormal cells on her cervix during an annual exam. She explained,

Over 2 years, I believe I had 7 or 8 colposcopys/biopsys, each time having the visible abnormal cells removed. The cells kept coming back, worse each time and covering a larger area of my cervix, until they began growing up into the canal of my cervix. At that point, after doing everything in their power to keep me safe and healthy, my doctor referred me to Magee Women's Hospital, where I had the actual surgery to remove the larger portion of my cervix.

Although Planned Parenthood didn’t provide the surgery itself, Schiefer emphasized that the health provider was invaluable in providing screenings and biopsies, as well as continued support and information when she needed to seek a surgical intervention. She said, “If I hadn't had the amazing services and doctors at Planned Parenthood there for me for the past 8 years, I don't know where I would be. I never would have known that anything was wrong with me.”

Schiefer is not alone. According to Politifact, 935,573 people received cancer screening and prevention services from Planned Parenthood in 2013, of 2.7 million patients. Other services include STI testing and treatment (almost 4.5 million patients), contraception (just over 3.5 million patients), and pregnancy testing (just over 1.1 million patients). Most of the impetus to defund the Planned Parenthood has to do with abortions (which make up only about three percent of the organization’s services), but the Hyde Amendment, in place since 1976, already ensures that no federal funds go toward abortion, except when the mother’s life is endangered and in cases of rape and incest. Federal funding of Planned Parenthood goes toward services like the ones that Schiefer received — essential, potentially life-saving cancer screenings, preventative health care, and contraception.

Schiefer told Bustle that, although not every response to her post has been supportive, the “overall feedback has been positive,” with many people reaching out to share their own stories of how Planned Parenthood helped them. She said, "For the most part, I feel good about my choice to share the photo and my story. I know a few women who have gone through similar things and are, in a way, embarrassed to talk about it. I'm not."

More like this
This Company Will Send STI Tests Right To Your Door
By Lexi Inks
Wimbledon Alters All-White Kit Rule Amid Candid Period Discussions
By Catharina Cheung and Rachel Mantock
Iran Has Issued A Death Sentence Over Mahsa Amini Protests
By Catharina Cheung, Darshita Goyal and Maxine Harrison
MOBO Awards Found Kanya King On The Woman Whose Grit & Determination Spur Her On
By Kanya King
Get Even More From Bustle — Sign Up For The Newsletter