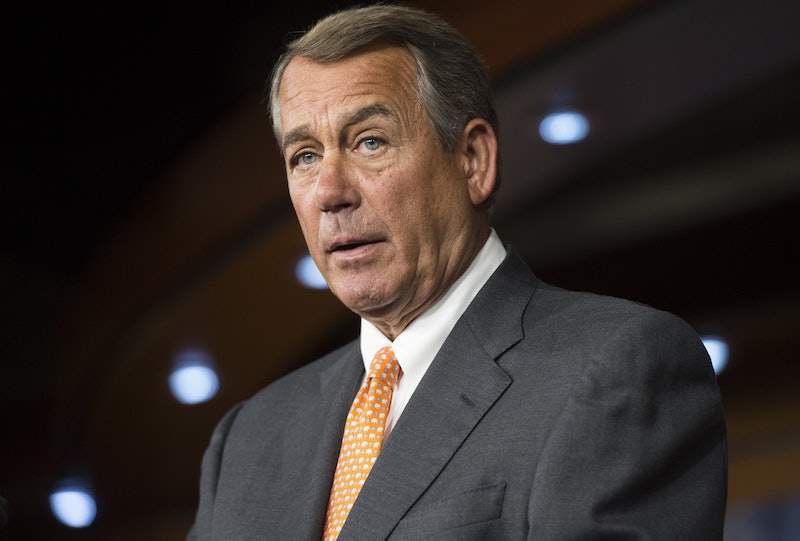 On Friday, John Boehner abruptly declared he'd be resigning — both from his role as House Speaker and from Congress generally. In a terse statement to reporters, Boehner insisted he'd been planning to leave last year, and cited Eric Cantor's dramatic loss as his reason for staying longer. But the timing is fishy — as Joe Biden knows better than anyone, the window to announce you're running for president is closing fast, and Boehner would have had to have given up his job to do so. So, is Boehner going to run for president in 2016 now?

Frankly, it's unlikely. In a now-famous line to Jay Leno back in 2014, Boehner told the host: "I like to play golf. I like to cut my own grass. I do drink red wine. I smoke cigarettes, and I'm not giving that up to be President of the United States."

In the same Leno interview, when asked about a potential bid to run the free world, Boehner said, "You’ve got to either have a very special calling or be an ego maniac to want to."

Basically, there have been no inklings whatsoever, aside from "Well, maybe?" speculation from a few political pundits in the wake of his abrupt resignation, that Boehner has done an about-face and decided to run for president in 2016. If he had any stirrings to do so, he could just as easily wait until 2020 (although, to play devil's advocate, he'd be running against an incumbent — likely a more difficult battle to win).

As for Boehner's assertion that drinking and smoking would make him ineligible for president, he certainly would have to give up smoking to have a shot at Commander-In-Chief — but the avid golfer wouldn't have to give up the game. Conservatives have gleefully pounced on how often the current president has played golf during his six-year tenure; look no further than ObamaGolfCounter.com, for example, which attests that Obama has golfed for 248 days as president. (Business Insider reported that it was over 1,100 hours.)

That said, I get the sense that Boehner — who is 65 — is going to relish spending his golden years playing golf, drinking fine red wine, and cheerily lighting up between swings. Unless meeting the Pope this week has sparked a spiritual epiphany, leading him to give up on all of those dreams and enter the presidential race rather late in the game, you shouldn't expect to see him on the Republican debate stage anytime soon.