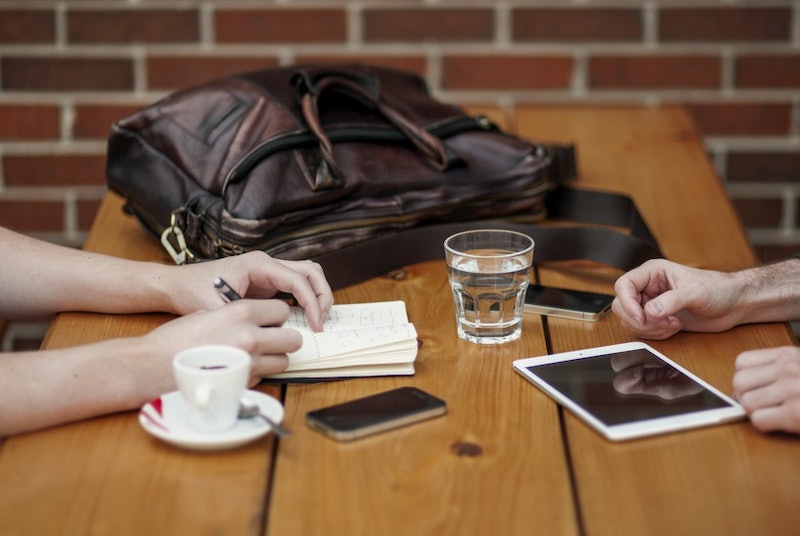 In most cases in life, lying is not OK, and especially when it comes to your career. However, there are times when you can lie in a job interview without having to feel total guilt afterwards. That's right — a little white lie during an interview may actually do you some good. Now, before you start inventing a gloriously fictitious skill set to sprinkle on your new and improved resume — actually, don’t even think about doing that at all because that is not acceptable — there are quite a few things to consider.

We’re all aware of the insane pressure placed on job interviews. The job interview is the crucial time you have to market and sell yourself as genuinely as you can in person. This is your time to shine, bring that application to life, and show everyone why you’re the one they should hire. Yeah, NBD.

Of course you should be honest. Because lying about being able to do something you definitely can’t do just to match the job description will only get you in some pretty awkward trouble down the road.

That being said, as career and business experts like Peter Harris, editor-in-chief of online job board Workopolis pointed out to Business Insider, there are definitely some lies you will have to tell to get hired for the job. There are certain things you can leave out, embellish upon (always within reason), and times to considerately throw in that white lie, that won’t jeopardize your professional integrity. Here are those seven times you can lie in the interview.

1. Skills You Don't Have, But Know You Can Learn

As Lifehacker pointed out, if you can spend a night learning what you need to know before you need to know it, you can claim proficiency in a skill you don't really have (yet). If anything, this demonstrates quick-learning, adaptability, and reinvigorates your desire to seize that job. But be wary of the risk that this poses. You have to make sure you actually are able to learn it, after all. Because otherwise what's the point and why are you even applying?

I once waltzed into an interview with the pompous thought that I could totally BS my way into lying about how well I knew a program that company specifically used. In my head, I justified this with the logic that I would learn it all on the job, and that was acceptable because I was passionate about the position. Boy, am I glad I wasn't hired. As it turns out, knowing that program was the entirety of the position. I let the glamour of the title and the company get the best of me, without really thinking practically about it.

Shortly following that interview, I learned my lesson and stuck to more grounded areas of expertise with comfortable room for stretching. Sure enough, though I didn't know Excel as well as I claimed I did, it was nothing a few online courses and poking around spreadsheets couldn't fix.

This may sound like a similar point to the previous one, but it runs a slightly different course. Many of us have held positions with not-so-impressive titles and pretty barren job descriptions that suggested nothing close to impressive. And yet we worked our asses off. Hell, maybe you were the best ice cream scooper there ever was in the ice cream scooping industry. Here's your green light to go ahead and emphasize those aspects of the job when you went the extra mile, spinning it so it's a little more relevant to that position for which you're currently applying. Playing up certain roles doesn't do much harm because it doesn't change the fact that you did work hard and will more than likely reflect the same sort of attitude going forward.

Ah, perhaps one of the most dreaded interview questions by far. As Harris pointed out, everyone lies when answering this question. He said you probably wouldn't honestly say that your greatest weakness is inattention to detail or accepting feedback gracefully. He suggested sharing a weakness that doesn't affect your ability to do the job at hand, and to explain how you plan to improve it. So while you shouldn't totally lie about your weakness, not sharing your greatest weakness isn't the worst thing you could do. When it comes to entering a professional environment in which creative solutions are constantly demanded, being proactive and self-aware is key.

4. How You Feel About Your Former Co-Workers

If the company culture was one of the real reasons you left your previous job, it may not be in your best interest to disclose this to your new potential employer. Even if it really was no fault of your own and the people were just the absolute worst, your potential employer has no real way of knowing that. Even bringing that up will set off those unnecessary negative vibes that could detract from all the positive you have to offer in that moment. Your interviewer may instead start thinking about how good of a fit you would be for the team and questioning your ability to work well with others.

5. How You Feel About Your Former Boss

And in much of the same vein, you're definitely better off avoiding bad-mouthing your old boss. I don't care if they were the love child of The Devil Wears Prada's Miranda Priestly and Bill Lumbergh from Office Space, and chances are, neither will your interviewer. In fact, your interviewer will probably be mulling more over what it would be like to work with you — whether or not you're respectful, if you're really just petty, and what you would potentially have to say about them as an employer.

Pizza, Netflix, and chill doesn't even really cut it for Tinder anymore. So yes, here's another time you can fluff up a bit of what an established individual you are and play your dinner party cards. You don't have to feel like a schmooze if you throw in the lofty and sophisticated interests like traveling, reading, and tennis, considering that you actually do like to do those things. Again, they don't have to be your absolute favorite, but there should be some truth to it. Because how awkward will it be when your future employer invites you to play tennis next weekend and you don't even know how to hold a racket? As Harris suggested, if you're going to talk about your interests, find out how they could relate to the job and the culture of the company.

7. All Of The Places You've Worked

As Harris told Business Insider, if you've worked somewhere for a very short period of time, or where it ended badly, don't bring it up. You are not obligated to provide a comprehensive list of everything you've done. We've all had good and bad experiences, so now is your time to highlight the relevant, positive ones.

There's no perfectly calculated formula to acing that job interview, but one thing's for sure — you want to showcase the best of what you can offer but also make sure the job is right for you. So some little white lies to give you that boost are OK, but always be truthful and yourself to the core.