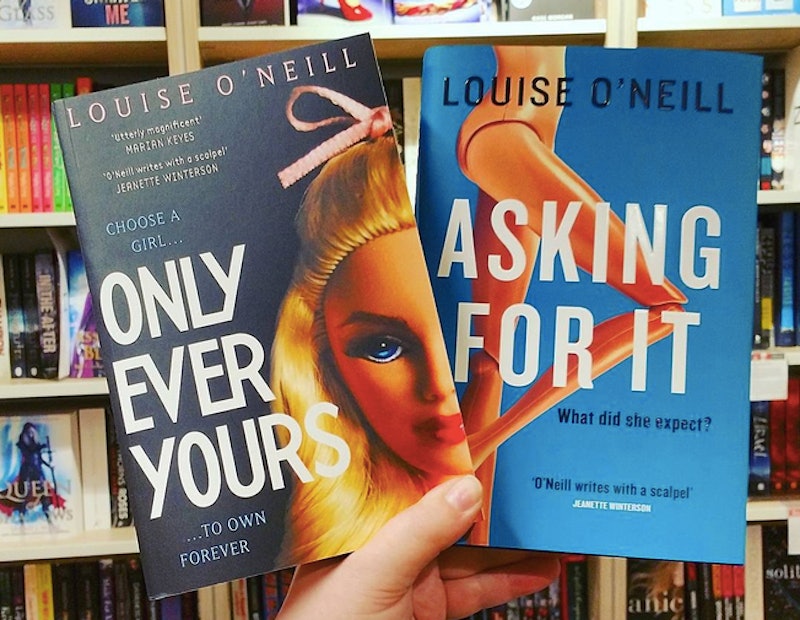 If you're a literature-lover, young adult fanatic, feminist, or, well, woman, it's hard to have missed talk of Louise O'Neill's Only Ever Yours. It's with good reason: the Irish author's debut YA novel, which came out on this side of the pond in May, has made serious waves with its discussion of sexism, rape culture, and societal standards for women through the futuristic dystopia O'Neill has created. Women are bred — designed to perfection — specifically for the pleasure of men, then ranked and chosen to be companions. The rest will become concubines — or worse. They're discouraged from being intelligent or having distinguishing personalities or characteristics, and those who oppress them go to extreme lengths to make sure the girls know their existences are inconsequential. It's a terrifying world — but one that's not too much of a stretch to imagine.

O'Neill's next book, Asking For It, just hit shelves in the U.K., and we'll finally be able to get our hands on it in April. And, oh yes, she digs deep on the same themes in this one, too — you didn't think she'd hold back, did you? Bustle is so excited about O'Neill that we'll be hanging out with her to chat when she comes to New York City. This Thursday, October 1, I'll be in conversation with O'Neill at Brooklyn's Word Bookstore at 7:00 p.m. — and if you're in the area, we'd love to have you join us.

To get ramped up for the event, I asked the author to answer five Qs about feminism for which she had some seriously smart answers. If you're excited about Only Ever Yours and O'Neill's sharp, observant brand of commentary, you'll love what she has to say. Take a look at her responses — and, of course, come join us on October 1.

What’s the biggest misconception about feminism in modern society?

The biggest misconception about feminism in today’s society is the same as it always has been — that feminists hate men and that we believe that women are somehow the superior sex. That is completely incorrect. Feminism is about equal rights and opportunities for men and women. It benefits both genders as it allows us to just be ourselves, without feeling pressure to conform to a stereotypical ideal of masculinity or femininity.

How will the definition of feminism change for young women who are exposed to it early on versus those of us who were exposed to the idea later in life?

I think the earlier that you become familiar with feminism, for young men and young women, the easier it is to identify the bullshit patriarchal narrative the media is trying to feed us about what it means to be a "real" man or a "real" woman. We are bombarded with images and subliminal messaging on a daily basis about what a woman should look like, how she should behave, what sort of values she should hold. Those prejudices can become deeply entrenched the longer you are exposed to them, and more difficult to shift.

Who would be the modern-day leaders of your feminist utopia (if there would be leaders at all!)?

This is the best question ever and I have SO MANY people that I want to include. I would like Chimamanda Ngozi Adichie, Roxane Gay, Emer O’ Toole, Malala, Marian Keyes, J.K. Rowling, Jessica Valenti, and Kate Harding to be someway involved.

What’s the most surprising thing you’ve learned about your own views on feminism through writing Only Ever Yours and Asking For It?

I have identified as a feminist since I was 15 years of age and my English teacher handed me a copy of Margaret Atwood’s The Handmaid’s Tale. I read English Literature at Trinity College Dublin and I naturally gravitated towards modules that heavily featured female authors or were concerned with gender and sexuality. Despite this, I had still internalized a lot of misogyny and had very fixed ideas about how men and women "should" behave, particularly in relationships. Writing these books really highlighted all those destructive beliefs, and helped me to work through them, changing the way I saw myself and the world around me. The more I thought about these issues, the more I could see how prevalent they were in our culture, and the more determined I became to try and enact change.

What’s the biggest way that young adult authors can help promote equality through their writing?

The literature that we read during adolescence can shape how we view ourselves and how we see the world around us. I think it’s important for YA authors to be cognizant of that and to be aware of their responsibility to depict male and female characters as equals.

More like this
Romance Authors Are Mobilizing For Reproductive Rights
By Natalia Perez-Gonzalez
The Most Anticipated Books Of October 2022
By K.W. Colyard
For Mur Lafferty, Genre Is Everything
By K.W. Colyard
'Firefly Lane' Season 2 Will Be The Show's Last — But There's A Twist
By K.W. Colyard and Grace Wehniainen
Get Even More From Bustle — Sign Up For The Newsletter