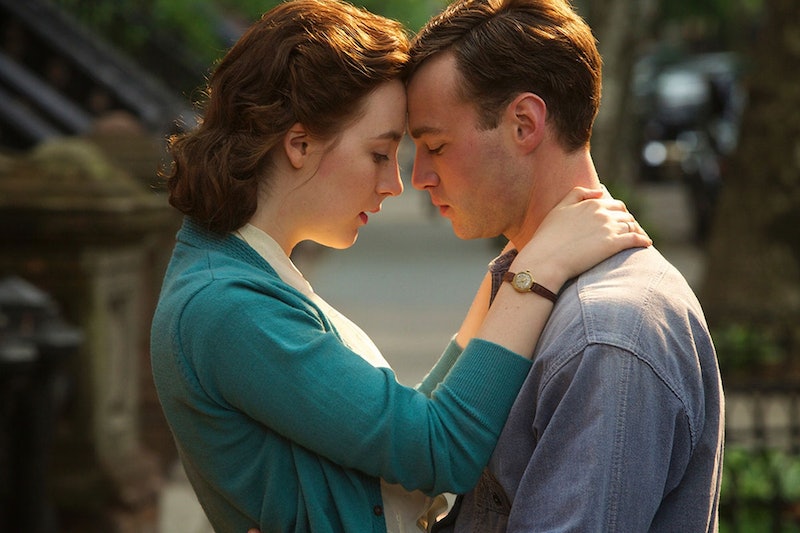 Perhaps the most visually stunning film to come out of Sundance Film Festival 2015, Nick Hornby's Brooklyn surrounds a young woman traveling from her home in Ireland to pursue a life in Brooklyn, New York, in the 1950s. While the film is a period piece centering around an immigrant's story, its message is undeniably relatable. As citizens of the world in 2015, we have the ability to travel as frequently as our pocketbooks allow us, and choose new locations and new lives whenever we please. And when we do inevitably leave home for the first time, it can be a heartbreaking journey. "I moved out when I was 19, and went through that intense homesickness that you get when you leave home," the film's star, Saoirse Ronan, says. "Even though you're motivated by needing your independence and wanting to be your own person, it's scary. You're completely self dependent. It was the biggest learning curve I've ever had."

Audiences know the 21-year-old actress for a variety of memorable roles, including Agatha in The Grand Budapest Hotel, The Host's Melanie Stryder, and of course, young Briony Tallis in Atonement. But for the Irish actress, her role as Brooklyn's Eilis Lacey hit home the hardest. "I usually play characters that are very, very different than me in their situations, but this was my life. This was home," she says. "Ireland is one of those places where everyone kind of knows eachother. I've become more and more patriotic about being Irish as I've gotten older and lived and worked away."

"We shot in a town that's 20 minutes away from where I grew up, and so you're facing yourself in a mirror every single day. Nick Hornby, the genius, wrote, 'You'll feel so homesick you'll want to die, and there's nothing you can do about it apart from endure it,' and it's just so perfectly written," she says, adding: "Everyone tends to go through the same pattern of floating above these two places for a while, where you don't quite know where to land. Even though it's exciting, it's very scary when you don't quite know where home is anymore."

In Brooklyn, Eilis must choose between Ireland and Brooklyn, and the two men she's fallen in love with — one from home, and one from her new home in Brooklyn. "Eilis, while she will speak her mind, she's from a small town where your Mommy will decide whether or not you're going out on Sunday or not," Ronan explains. "That's what she was used to, and all of a sudden she comes to New York and there's this exotic young guy who's really into her, and she gets this feistiness that she's never had before."

Playing her Italian American suitor, Tony, is Emory Cohen, who audiences may remember from brooding on screen opposite Ryan Gosling in The Place Beyond The Pines. "I've never worked with anyone like Emory before. His style of work and his work ethic is very, very different to the way I work," Ronan admits. "He takes the method route and I don't, so the dynamic that was created, this ying and yang situation, really worked well."

While the film is extremely romantic, the period setting restricted showing too many outward displays of affection on screen. " We are all so tactile now, especially with people we're close with," the Hanna actor says. "Eileen [O'Higgins], who plays my friend Nancy in the film, there's a scene where we did where I come back home, and I'm at the church on Sunday, and I see her after a year. Eileen and I fell in love with eachother straight away, so we just wanted to hug eachother and kiss eachother, and [John] had to dial it back because socially they just didn't do that, it was a lot more refined and kept back. That was something we had to keep in our minds quite a bit."

With a period setting, comes period costumes — 1950s wardrobes that feature cardigans, tight blouses, and voluptuous, full skirts. "I've always had really interesting costumes, but they've never been girly. This was the first mature womanly role that I got to play. I felt very ready for it," she says. "Because of the style of clothes they had, they really encouraged women to have a womanly shape — to have boobs, to have a bum, to have curves — so it was really nice to be in touch with that side when I was working."