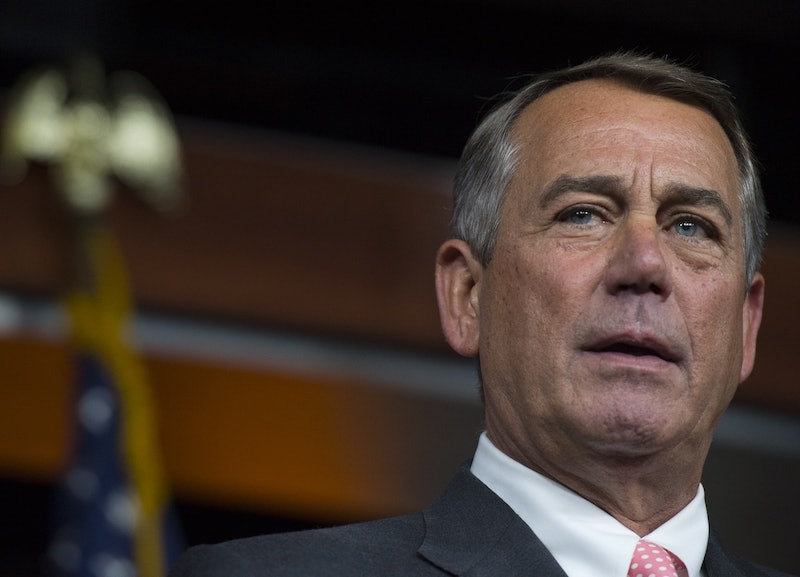 By the end of next month, House Speaker John Boehner will be gone from the hallowed congressional halls, the Ohio Republican announced in a news conference on Friday. His decision came as a huge surprise to those on the Hill who had expected him to announce his resignation at the end of the year. Boehner has insisted officially that his resignation was based on a desire to avoid turmoil within the GOP leadership, although at least a handful of analysts and congressional members have argued that the extreme right wing had destroyed the Republican Party with its refusal to seek out compromise.

"I think it signals the crazies have taken over the party, taken over to the party that you can remove a speaker of the House who’s second in line to be president, a constitutional officer in the middle of his term with no allegations of impropriety, a person who’s honest and doing his job," said Republican Rep. Peter King of New York, in an interview with CNN's Dana Bash on Friday. "This has never happened before in our country — he could have stayed on."

King added that Boehner's resignation was essentially like "throwing raw meat" to the extreme wing of the Republican Party that was intent on driving a wedge into the budget discussions and subbing in non-budgetary items, such as the defunding of Planned Parenthood, in order to threaten government shutdown. "We’re not going to appease them," he added. "The time for appeasement is over."

Boehner himself told reporters on Friday that he had been mulling over his impending retirement for a while, but that he had only come to a concrete decision on the matter that morning, just one day after the speaker became openly emotional during a speech by Pope Francis, who was in town on an official papal visit to speak to Congress and visit several memorials and churches in New York and Washington, D.C.

"This morning, I woke up, said my prayers, as I always do, and thought, 'This is the day I am going to do this,'" said Boehner in a statement to the press. He recalled that the night before, he had found himself alone for a moment with Pope Francis, recounting that the Pontiff had put his arm around him and asked that Boehner "please pray for [him]." Boehner said,

The Pope puts his arm around me and kind of pulls me to him and says please pray for me. Who am I to pray for the Pope? But I did.

Although Boehner added that it had become clear to him that "prolonged leadership turmoil would do irreparable harm" to the Republican Party and that he had opted to remove himself from that equation.

The sudden announcement has made waves with those who now see the advancing right wing of the GOP as a major threat to any remaining balance left on the Hill. Both House Minority Leader Nancy Pelosi and Senate Minority Leader Harry Reid voiced those frustrations on Friday, with the former calling the move a "stark indication of the disarray of the House Republicans," and a "hijacking" of the traditional Republican Party. Reid tweeted that with Boehner's retirement, "the party of Eisenhower and Reagan" was "no more."

Those sentiments weren't far from the truth: No sooner had Boehner announced his decision than 2016 presidential candidate and Texas Sen. Ted Cruz decided to make his own extreme opinion known, casting doubt on the outgoing Boehner and claiming that the Ohio Republican had cut a deal with House Democrats to continue funding Planned Parenthood even after his resignation.

"If it is correct that the speaker, before he resigns, has cut a deal with Nancy Pelosi to fund the Obama administration for the rest of its tenure, to fund Obamacare, to fund executive amnesty, to fund Planned Parenthood, to fund implementation of this Iran deal," said Cruz to an audience at the conservative Values Voters Summit in Washington, "[then] that is not the behavior one would expect of a Republican speaker of the House." Cruz applauded the announcement, saying that it was time for a more right-wing conservative to take over the position and bring change to Washington.

Rep. Jim Bridenstine (R-Oklahoma), who introduced Cruz to the audience on Friday, hinted that things were finally changing thanks to Cruz himself, who had "showed up [on Capitol Hill] and started articulating principles that were consistent with the Republican platform," rather than repeating old party lines.

That sort of talk has been a common theme among the 2016 GOP camp in recent months, with right-wing extremists like Cruz, former Pennsylvania Sen. Rick Santorum, and former Arkansas Gov. Mike Huckabee pushing the party further to the right with incendiary rhetoric on topics such as Islam, abortion rights, and religious liberty.

Just last month, Huckabee hosted a rally outside a Kentucky jail in order to honor the actions of Rowan County Clerk Kim Davis, who had been refusing to issue marriage licenses to same-sex couples and was arrested for contempt of court after defying a judge's order. Huckabee called Davis' imprisonment "a direct attack on our God-given, constitutional rights" in a statement on his campaign website.

Santorum also made headlines when, at the second GOP primary debate last week, he compared Davis to a Columbine shooting victim and Martin Luther King, Jr. Speaking out on the June 26 SCOTUS ruling which made gay marriage legal, Santorum explained that "today, someone who refuses to defy a judge's unconstitutional verdict is ridiculed and criticized, chastised, because she's standing up and not denying her god and her faith."

Staying true to the right-wing, pseudo-Christian talking points so popular with many in his political party, former neurosurgeon Ben Carson indirectly called the religion of Islam unconstitutional during an interview with NBC's Meet the Press. "I would not advocate that we put a Muslim in charge of this nation," Carson then added. "I absolutely would not agree with that."

At the other end of the docket, newly-minted conservative darling Carly Fiorina, eager to get in on the headline-grabbing action as well, told audience members at the second GOP primary debate that the fight over abortion was vital to the moral integrity of the country. Citing recent videos from the conservative pro-life group Center for Medical Progress, which allegedly showed Planned Parenthood executives discussing the sale of fetal tissue for cash (a claim that the nonprofit has vehemently refuted), Fiorina lamented,

I dare, Hillary Clinton, Barack Obama, to watch these tapes. Watch a fully formed fetus on the table, its heart beating, its legs kicking, while someone says we have to keep it alive to harvest its brain. This is about the character of this nation!

While the remainder of the Republican Party sits back on its hands and watches while candidates like Fiorina, Cruz, and Donald Trump (who has called Mexican immigrants "rapists" and "drug dealers," and routinely makes a habit of claiming that he's not politically correct, to great acclaim from his supporters) take over the political discussion, a massive shift to one end of the spectrum has begun. And as extreme, religious-based ideology begins taking the main-stage in conservative politics, there's no question that the Grand Old Party as we once knew it has taken a turn down a questionable path, away from compromise and into a darker era of right-wing authoritarianism.