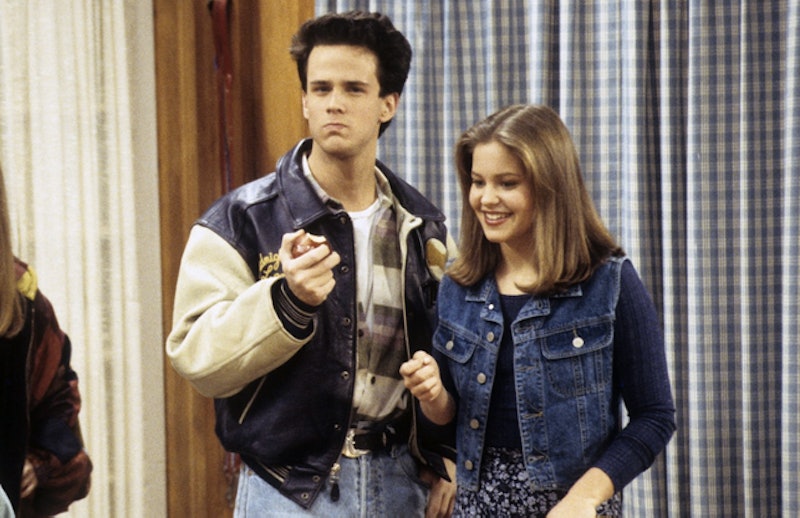 If you grew up in the '90s (or have any heart at all), then you totally swooned over Steve on Full House . Played by Scott Weinger (yes, the speaking voice of Aladdin), Steve was DJ's longtime boyfriend and lover of all things food. Seriously. He ate more than the rest of the Tanners combined. But while Danny had his hesitations about the DJ-Steve coupling, fans loved seeing the pair together. Little did we know that they were already defining couple goals for those of us who grew up watching them.

DJ and Steve first got together in Season 5, when he was supposed to take her to the movies and Michelle and Stephanie tagged along. Steve and DJ later became official while studying abroad in Spain. He first met her family in Season 6, and then eventually, he confessed that he loved her. (Awww!) Although they broke up in Season 7, Steve's surprise appearance in the finale gave me hope that they'd be endgame.

Whether you hoped to meet your true love in Europe or you were smitten by Steve's charm, he and DJ were totally adorable together. In honor of their relationship (and the upcoming Fuller House reboot), here are nine times DJ and Steve totally defined couples goals for all of us.

1. When He Surprised Her For Her Prom

And the look on her face said it all.

2. When He Tried To Bribe Michelle

Just so he could have some privacy with DJ. Too bad Michelle wasn't game.

3. When He And DJ Were Camp Counselors

And he was so cute with the campers.

4. When They First Got Together

Even if he was Danny's worst nightmare.

5. When They Destroyed The Kitchen

It's not their fault they wanted some alone time.

6. When He Was Aladdin IRL

DJ kept hallucinating him because she missed him so much.

7. When He Admitted To Seeing Her In His Food

This is true love, folks.

8. When He Was So Excited To Show Her His New Place

9. When He Pretended To Marry Michelle

Because Steve was a catch.

Full House might have ended in the '90s, but DJ and Steve will live on in my heart.