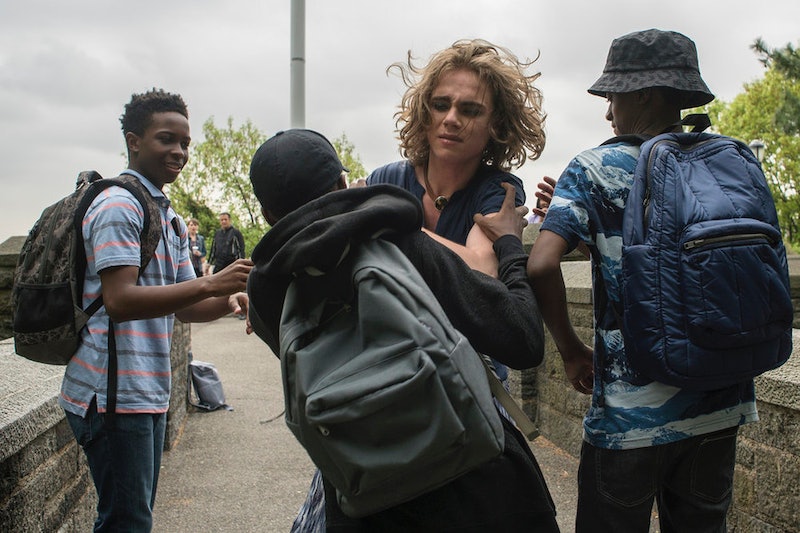 Transgender issues are continuing to make their way onto TV. Law & Order: SVU featured a storyline with a transgender teen on Wednesday's show. After all, they don’t say that their plots are “ripped from the headlines” for nothing. And, while I wish that the SVU writers could have done more with the story, I’m grateful that another mainstream show is sparking a discussion on the subject of trans rights.

Let’s take a look at the episode. At the beginning, we’re shown the lives of two teens: Darius is black, has a single mother who works and a sister he must take care of, and is a cisgender male. Avery is white, greets both parents before leaving for school, and is transgender. Both are average, presumably loving, and bright teenagers, so how could the day go so wrong? At the end of the school day, Darius is in the park with his friends when he spots Avery, sporting heels and a skirt. He and his friends pick a fight with Avery, harassing her and stealing her camera. In a scuffle, Darius pushes Avery, sending Avery off a bridge and onto the pavement below. Avery survives the fall, and Darius apologizes to Avery, saying he didn’t mean to push her and hurt her — He just wanted to get her off of him — and the two find forgiveness and similar interests in graphic novels (Darius is a skilled artist). Later, Avery dies from complications from the fall, because apparently someone always needs to die in a Law & Order: SVU episode.

So, here’s the problem: Should Darius be charged with a hate crime and tried as an adult or sentenced in family court as a minor? The D.A. opts for the former, and it’s apparent that the SVU team is unsure how to feel about this, because Darius is a scared kid. (Also Black Cindy from Orange Is The New Black is his mom, which is unrelated, but I just was delighted to see her on TV). I, too, am unsure how to feel about Darius being tried as an adult. He is eventually tried as an adult and convicted with a hate crime, as the judge wanted to “make an example of him.”

I’m firmly of the mind that education and empathy are the key tenets of tolerance, so locking Darius up and throwing away the key is not necessarily the way to make him better understand transgender people. Darius’ reaction to Avery came from a place of fear, and even Avery, prior to her death, recognized that. Her parents recognize that, too, as Avery’s father testifies on Darius’ behalf at the trial.

Ultimately, Avery is cognizant of the fact that she is different, and she so wishes to connect to people to make them understand her journey. Avery is the bravest person on this episode of Law & Order: SVU, and I feel like it would have been even braver on the part of the show to keep Avery alive. She knows that there is no understanding without empathy, and SVU would have spurred even more discussion had Darius and Avery found common ground.