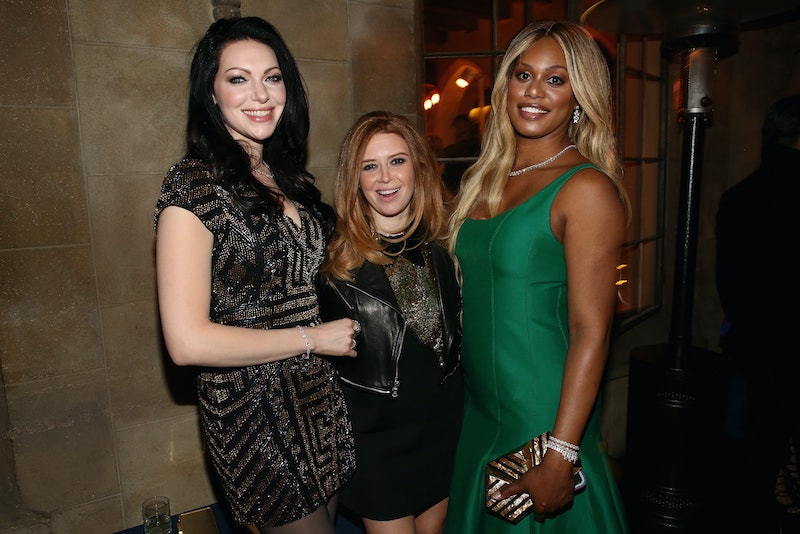 It's 2015, and transgender people are finally in the showbiz and political spotlight. Laverne Cox of Orange Is The New Black is winning acting and activism awards left and right and proudly posing naked, and Poland's 2015 presidential race will have its first transgender candidate, Anna Grodska. But, as always seems to be the case when transgender people get into the news, there are also deeply tragic stories: transgender 17-year-old Leela Alcorn's suicide in 2014, and the murder of at least seven transgender women in the U.S. in 2015 alone. As transgender people become more visible, so do their struggles — and, hopefully, the amount of straight people wanting to become trans allies grows.

So what is a trans ally? An ally in general, if you take the definition of UC Berkeley's Gender Equity Unit, is "someone who advocates for and supports members of a community other than their own; reaching across differences to achieve mutual goals." Transgender allies are non-trans people whose support is focussed on the trans community (though it doesn't have to be only that; there's room for you to be an ally for other causes too!).

With tips drawn from transgender people themselves, organizations like GLAAD and Straight For Equality, and transgender associations across American college campuses, here is your definitive starting guide to beginning a journey as a transgender ally. I'm assuming you already know some of the basics — that saying "You're transgender? But you're so pretty!" is massively rude, for instance — and that you're ready for more advanced advice. If not, please check out GLAAD's Tips For Allies first, then return here.

Bleakly, being trans* and out is dangerous. Never, ever out a person without their express permission; this is not a thing that can be done and then apologized for later. Matt Kailey's Transifesto lays it out clearly: "If you see a person on the street that you know to be trans, it is a private matter and not appropriate to tell your friends that the person is trans. It is also not appropriate to mention anything that would 'out' a trans person if you are with that person in a public setting."

The act of outing a trans* person means potentially endangering their jobs, their families, and their bodies. Even if you're "sure everybody would be OK with it," don't. That is not an oopsie you can fix.

Understand the basic premises of transgender identity. Cher's son Chaz Bono, who was assigned female at birth and is a transgender man, explains it as being "a birth defect, like a cleft palate." "There's a gender in your brain and a gender in your body. For 99 percent of people, those things are in alignment. For transgender people, they're mismatched," he says. A transgender person is assigned a gender at birth that doesn't correspond with how they feel or identify — but there are a lot of myths and misconceptions about what that means.

The main thing to get is that it's not about sexual attraction — there's a distinction between sexual identity and gender identity, and there are both gay and straight trans people, just like in the non-trans community. There are also people who live outside the gender binary and don't identify as male or female, and people who may or may not be transgender.

If you're unsure about what pronoun a person would prefer, it's polite to ask, without making a big deal of it. It's better to make sure they're comfortable than make a mistake and make them uneasy. GLAAD trans activist Tiq Milan told the Huffington Post, “People would respect [the question] more than they would reject it, particularly if you have people not on the binary." They may also have personal preferences for gender-neutral pronouns, like ze and zir, which would be respectful to use.

Words can be violent; there are many phrases that can be seriously hurtful to trans people. Educate yourself. Even those that sound clinical are still offensive; trans activist Julia Serano explains, "It is offensive that so many people feel that it is OK to publicly refer to transsexuals as being "pre-op" or "post-op" when it would so clearly be degrading and demeaning to regularly describe all boys and men as being either “circumcised” or “uncircumcised." Trans people often like to say they were "assigned [x gender] at birth," rather than "born a boy/girl," because their relationship with their body and gender is more complicated than that.

Asking invasive questions about operation status or hormones, referring to anybody as "tranny" or "she-male," or saying they "used to be a man (or woman),"are all misunderstandings and offensive.

5. Realize That It Can Be Painful

The realities of supporting trans* people can contradict your ideas about humanity's inherent goodness. Reports on discrimination against transgender people, in the workplace, social situations and family and romantic contexts, make for some very hard reading. Rejection by family members is horrifically common, and a 2007 study showed that 34 percent of all trans* people had considered suicide.

And even without the societal pressure, the internal turmoil is serious. Author David Levithan's explanation, in his book Boy Meets Boy, is: "It is an awful thing to be betrayed by your body. And it's lonely, because you feel you can't talk about it. You feel it's something between you and the body. You feel it's a battle you will never win ... and yet you fight it day after day, and it wears you down." Embracing your true gender can be a really difficult journey.

Just because a person looks like they've been a particular gender all their life doesn't mean they can't be trans. Trans academic Jack Halberstam notes, "There are trans people who are politicians, doctors, lawyers, professors. I think that increasingly people do know trans people, though they may not know it."

And just because you've heard one trans* person's story doesn't mean that's all there is. Never assume that a trans* person has definitely been rejected by their family, had a terrible time growing up, or, on the other hand, had an easy ride all the way through; there's a huge diversity of trans* stories. Don't make any assumptions about a trans* person's medical history, romantic relationships, or feelings about their own life.

The big deal about Leela Alcorn, Chaz Bono, and Laverne Cox grabbing the spotlight? It challenges trans* invisibility. As Jamie-Ann Meyers, a trans woman and transgender advocate, wrote for the Huffington Post, many trans* people often feel invisible or excluded, even in fights that may look as if they include them, like protests for LGBT rights. One of the best ways to challenge this? Listen.

Your transgender friend or partner isn't a PSA or "teaching moment," but their lives and challenges are important and deserve to be heard.

Transgender people face a truly shocking amount of violence and discrimination. In the first four months of 2014, 102 acts of violence had been recorded against transgender people in America, including murders and attacks by mobs. That's horrific any way you put it. It's necessary for allies to step up to the plate to change attitudes, particularly if they witness any hate speech or act of oppression — but in a way that doesn't deprive trans people themselves of their rights or personhood. Laverne Cox is very open about the fact that "each and every one of us has the capacity to be an oppressor" — even those of us who think we're doing good.

It can be very tempting to ride in, cis-gender, on your white horse, to Solve Trans Discrimination, but that can deny their capacity to fight for themselves. You're with them, but you ain't in charge.

9. Keep Your Curiosity About The Process To Yourself

On the Transgender Quotes Tumblr, a collection of submitted quotes from the trans community, there's one about the process of transitioning that shows just how emotional and tricky it is: "Every night before I fall asleep I wish I'll wake up in the right body, as a boy, and that everything was just a dream." With this sensitivity in mind, while it's pretty normal to be curious about surgery, or want to show off just how much you know and understand about the process of transitioning to a transgender person, resist the temptation.

If they want to tell you about hormones, surgery, or whatever other steps they've taken/are taking, make it clear that they can, but good allies don't ask. Also, be aware that there are many ways to transition, and that the surgery-and-hormones route isn't for everybody.

It may seem like the most political thing to say that you don't "see" gender, and that whichever way a trans* person identifies in gender terms doesn't matter to you. But this isn't helpful, in two ways.

One, gender is a real thing — neurologically, the physical structure of our brains reflects and produces our gender identity. The scientific discovery that the brain is the center of individual gender identity was made in Vienna in 2015; the scientists involved said that "gender identity is reflected in the structure of brain networks which form under the modulating influence of sex hormones in the course of the development of the nervous system." So it's definitely there, even if you don't see it.

Two, saying it's just a spectrum or a false binary minimizes and makes invisible a trans person's attempts to live as their preferred gender.

Straight For Equality's Guide To Being A Trans* Ally — which is a fantastic, funny, in-depth resource for any straight person looking to be an ally to transgender people — has a whole spectrum of ally "types". The last one? The Super Ally, who's going to be a political force for change. So how can you go from supporting friends and people you know to using your Ally Powers in a wider spectrum? Straight For Equality recommends getting educated on the legal challenges facing trans* people — from accessing medical care to being protected against discrimination at work.

Even if you're politics-averse, keeping on top of these struggles and spreading the word in conversation can be seriously helpful to dismiss the idea that these are "just" LGBT or trans* problems (they're not). And if you're ready to add your voice, get active: sign petitions, lobby local Congresspeople, and be a vocal part of developing laws and regulations to protect trans* lives.