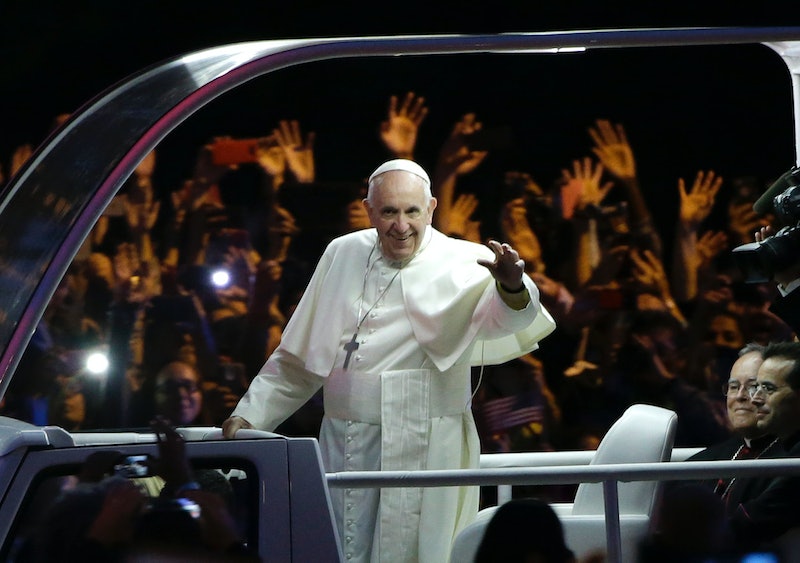 Pope Francis reached the last leg of his trip in the U.S. when he arrived in Philadelphia on Saturday morning. Later in the day, Francis gave a speech on religious freedom and immigration. But the message of Francis' speech was a bit different than what many pro-religious freedom representatives might have been expecting. Francis' best quotes on religious freedom show that he doesn't preach religion as a justification for intolerance; instead, he encouraged love, acceptance, and individuality.

Religious freedom has come to mean more than just the freedom to practice a religion over the past year. Now, the phrase includes laws like Indiana's controversial religious freedom law and Kentucky clerk Kim Davis' refusal to issue marriage licenses to same-sex couples after the Supreme Court ruled same-sex marriage bans across the nation unconstitutional. Francis' speech made no direct mention to either of these instances, nor did he address the Little Sisters of the Poor's lawsuit against the contraception mandate in the Affordable Care Act. Francis seemed to discuss religious freedom as something to be balanced with the individual rights of others. Here are five of Francis' best quotes from his speech on religious freedom that seemed to understand why the rights of the religious can't trump the rights of other U.S. citizens.

In a world where various forms of modern tyranny seek to suppress religious freedom, or try to reduce it to a subculture without right to a voice in the public square, or to use religion as a pretext for hatred and brutality, it is imperative that the followers of the various religions join their voices in calling for peace, tolerance, and respect for the dignity and rights of others.

Francis made interesting remarks about the "globalization" of one tradition or belief system. He said that seeking "one-dimensional uniformity" in religion or beliefs (for example, the idea that one religion is better than all the rest) is a "superficial quest for unity." Francis quoted the Evangelii Gaudium when he said the various religions should seek diversity:

The religions thus have the right and the duty to make clear that it is possible to build a society where "a healthy pluralism which respects differences and values them as such" is a "precious ally in the commitment to defending human dignity ... and a path to peace in our troubled world."

A globalization which attempts to bring everyone together while respecting the uniqueness and gifts of each person or people is a good globalization; it helps all of us to grow, and it brings peace. I like to use a geometrical image for this. If globalization is a sphere, where every point is equidistant from the center, it cancels everything out; it is not good. But if globalization is like a polyhedron, where everything is united but each element keeps its own identity, then it is good; it causes a people to grow, it bestows dignity and it grants rights to all.

During his speech, it was clear that Francis was speaking about religion in an abstract sense. He didn't only call for religious freedom for Catholics. He repeatedly said "religions" when he spoke about communities who have a duty to represent their particular belief system well by sharing their voices:

I take this opportunity to thank all those, of whatever religion, who have sought to serve God, the God of peace, by building cities of brotherly love, by caring for our neighbors in need, by defending the dignity of God’s gift, the gift of life in all its stages, and by defending the cause of the poor and the immigrant.

Francis gave special attention to the immigrants who attended his speech. He recognized that, just like the rest of the Catholics in the U.S., immigrants should have the freedom to celebrate their unique cultural traditions and forms of faith. Francis brilliantly encouraged immigrants not to abandon their traditions when they come to the U.S.:

I ask you not to forget that, like those who came here before you, you bring many gifts to this nation. Please, you should never be ashamed of your traditions. Do not forget the lessons you learned from your elders, which are something you can bring to enrich the life of this American land. I repeat, do not be ashamed of what is part of you, your life blood. ... I think in particular of the vibrant faith which so many of you possess, the deep sense of family life and all those other values which you have inherited. By contributing your gifts, you will not only find your place here, you will help to renew society from within.