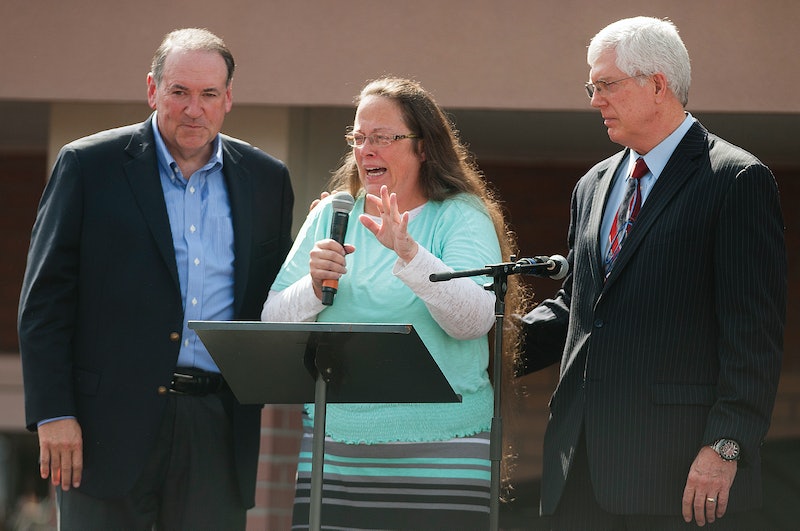 After spending five days behind bars for refusing to issue marriage licenses to same-sex couples in Rowan County, Kentucky, clerk Kim Davis returned to work Monday. Davis spoke to the press Monday and said that she will not authorize same-sex licenses but that she won't interfere with her deputies continuing to issue them for her, according to the Associated Press. She said her name and title won't be on any of the same-sex licenses, which she said might make them entirely illegal or invalid, but she isn't quite sure. Is Davis obeying the law and doing her job by allowing licenses to be issued in this manner? All signs point to a huge "no."

U.S. District Judge David Bunning jailed Davis after she told him she would still refuse to issue marriage licenses even after he ordered her to do so. In the meantime, Davis' deputies issued marriage licenses to same-sex couples in Rowan County, so Bunning decided to release her, according to CNN. During her statement Monday morning, the AP said Davis choked up while she was speaking. She said she was torn between obeying her God and following the judges orders. But, according to an analyst at CNN, Davis is legally obligated to authorize all marriage licenses — not just those that she feels are consistent with her religious beliefs. Though this "loophole" that will allow her deputies to do the work for her will allow licenses to be issued, Davis is still technically refusing to do her job.

Davis read from a statement when she arrived to work Monday, according to NPR:

Effective immediately, and until an accommodation is provided, by those with the authority to provide it, any marriage license issued by my office will not be issued or authorized by me. I love my deputy clerks and I hate that they have been caught in the middle. If any of them feels that they must issue an unauthorized license to avoid being thrown in jail, I understand their tough choice and I will take no action against them. Any unauthorized license that they issue will not have my name, my title or my authority on it. Instead, the license will state that they are issued pursuant to a federal court order.

If Davis makes any attempts to make it harder for same-sex couples to obtain marriage licenses, or if she stops her deputies from doing it in any way, then there could be big problems, yet again, according to CNN's senior legal analyst, Jeffrey Toobin:

If Ms. Davis stops them from issuing licenses, then we are right back where we started. And Judge Bunning has made it quite clear, he will lock her back up.

BuzzFeed News reporter Dominic Holden tweeted a photo of Rowan County deputy clerk Brian Mason, who said he would issue marriage licenses to same-sex couples today if any apply. The AP said that Mason now sits behind a sign that reads "marriage license deputy" and that he seemed entirely unfazed by the dozens of cameras that crowded his desk as Davis returned to work Monday.