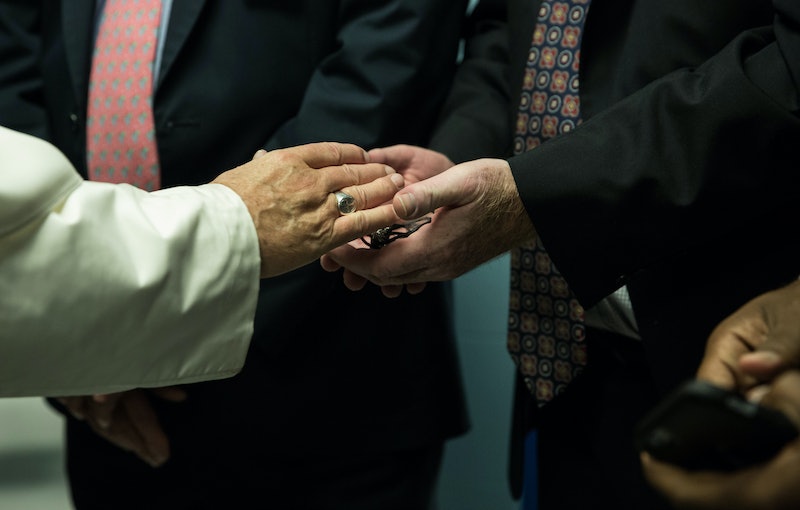 In Philadelphia on Sunday morning, Pope Francis met with five sex abuse survivors in a move to address decades of sex abuse allegations that have marred the Catholic Church's image. He said that "great harm" was caused by the actions of previous Church leaders who committed these acts and that "God weeps" for the survivors, according to the The Washington Post. What has Francis done to address the Church's dark history of abuse? Support groups for clergy sexual abuse victims say not enough.

Francis spoke about his meeting with survivors just before his prepared remarks at St. Charles Borromeo Seminary in Philadelphia on his last day in the United States. He said he is committed to "careful oversight to ensure that youth are protected and that all responsible will be held accountable," according to a translation of the Spanish remarks by the Post. Although support groups and advocates drawing attention to clergy sex abuse applauded Francis' direct address of the scandal, many said that simply meeting with survivors is not enough. Additionally, Francis came under fire Friday when he made several references to the scandal in a speech at St. Patrick's Cathedral in New York, addressing the scandal's effect on clergy rather than the greater, lifelong impact of sex abuse on the survivors:

You suffered greatly in the not distant past by having to bear the shame of some of your brothers who harmed and scandalized the Church in the most vulnerable of her members. ... I accompany you at this moment of pain and difficulty, and I thank God for your faithful service to his people.

Francis met with three women and two men who, now adults, suffered clergy abuse as children, according to the Post. But David Clohessy, director of the Survivors Network of those Abused by Priests, one of the nation’s most prominent support and advocacy group for victims of clergy sexual abuse, told the Post that the pope's action was "a smart public relations move ... nothing more":

Is a child anywhere on earth safer now that a pope, for maybe the seventh or eighth time or ninth time, has briefly chatted with abuse victims? No.

Marie Collins, a member of the Pontifical Commission for the Protection of Minors and an abuse survivor from Ireland, told the Post that the pope's meeting is a nice gesture if it helps the survivors in their healing process, but she said that it "really is not connected for the work for the future of child protection." She said real, institutional reform or a process for dealing with alleged sexual abuse is what's actually needed. The pope has set up a papal commission to advise on how to handle the issue going forward, which Collins said is "the most positive change to happen" so far.

The pope has expressed that the Church will have a "zero tolerance" policy for sexual abuse, but, in an op-ed for The Boston Globe, Anne Barrett Doyle pointed out that "zero tolerance" is only compulsory in the United States. The policy that any offending bishop be removed from the Catholic Church immediately after his first offense was instituted in response to a cycle of abuse and cover-ups that was revealed in the U.S. in 2002, according to the Globe.

Unfortunately, this policy doesn't extend outside of the U.S. In other countries, priests who molest minors are supposed to receive "just penalties," which can be as simple as a mild warning. A policy framework that the Vatican sent to the world's bishops in 2011 said a priest need only be removed if his ministry would be "a danger for minors or a cause of scandal," according to the Globe.

These kinds of discrepancies, which allow priests to maintain their positions as long as it won't attract negative publicity, are what people like Collins and Clohessy want to see addressed. They want to know how the Catholic Church is going to protect children worldwide — even when an offending priest's actions might not generate negative publicity for the church.

More like this
The Families Of Grenfell Tower Are Still Waiting For Justice, Five Years On
By Bustle UK
How To Support Gun Control Reform Right Now
By Morgan Brinlee and Carolyn Steber
Windrush Victims Are Still Waiting For Compensation
By Sam Ramsden
34 Quotes That'll Inspire You On Juneteenth & Beyond
By Syeda Khaula Saad and Siena Gagliano
Get Even More From Bustle — Sign Up For The Newsletter