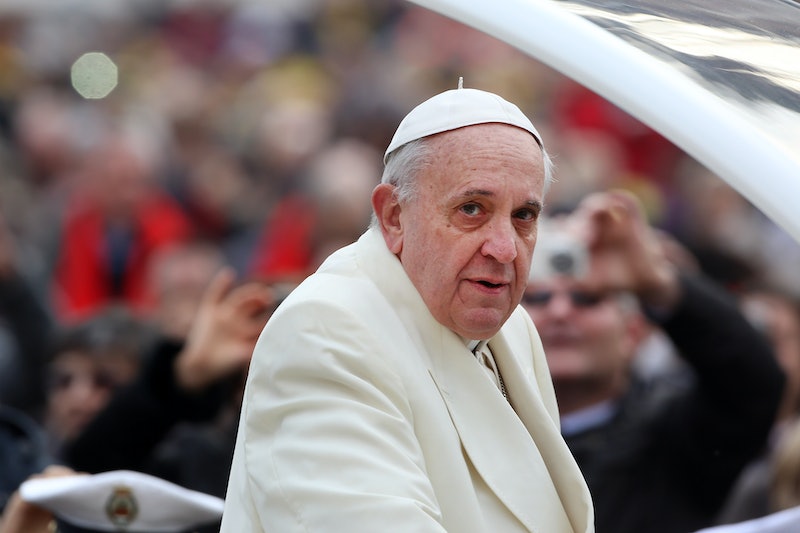 On Wednesday, the UN issued a damning report on child sex abuse in the Catholic Church, reflecting both on the predatory habits of countless priests, and the institutional cover-ups that facilitated the rape and molestation of thousands of children. The report, authored by the UN Committee on the Rights of the Child, raises the concern that the Vatican's response to the worldwide scandal "has not ac­know­ledged the ex­tent of the crimes com­mit­ted, has not taken the ne­ces­sary meas­ures to ad­dress cases of child sexu­al ab­use and to pro­tect chil­dren, and has ad­op­ted policies and prac­tices which have led to the con­tinu­ation of the ab­use by, and the im­pun­ity of, the per­pet­rat­ors."

The Church's negligence on this issue is a matter of well-documented fact. It is also a source of deep horror and shame, as well as financial ramifications for those diocese forced to pay hefty settlement sums to recompense both victims and families.

The report condemns not just the actions of the church in the years prior to the scandal's explosion, but questions the seriousness and effectiveness of the steps the Church has taken to prevent more abuse. It calls for the Church hierarchy to "Immediately remove all known and suspected child sexual abusers from assignment and refer the matter to the relevant law enforcement authorities for investigation and prosecution purposes."

The report comes amid a new context within the Vatican, thanks to the presence of a Pope quite different — in background and in practice — from the one who preceded him.

Pope Francis has demonstrated himself as a sort of papal reformist, in a relatively short time in power. He's shown a soft streak on a number of issues within Catholicism, homosexuality in particular, saying of gay priests, "who am I to judge?"

Thus the odds of changing the culture on child sex abuse (and physical abuse) within the Church seem better than when former Pope Benedict XVI was in charge. Benedict was subject to many accusations throughout his tenure, including a complicity or negligence in his handling of the way the Vatican office investigates reports of predatory pedophile priests.

In Pope Francis there appears to be a hope, or a possibility, that as in other ways he might split from the staid orthodoxy of his Church's past, and take the sort of transparent (and as the report demands, legal) action to purge this taint from the ranks of his priesthood. As Bustle reported, he already took some action on this issue late last year:

Pope Francis announced that he would be launching a new committee within the Vatican to fight child sex abuse by priests. The news comes just days after the Pope prayed for victims of clergy sex abuse in the Netherlands — and after the Vatican refused to provide the United Nations with information on such cases. (The U.N. is due to question Vatican officials on the matter in January.) It also comes after a Minnesota judge ruled Tuesday that the names of the accused priests in some of the state’s communities could be publicized online.

Earlier this year, the Pope strengthened protections against clergy sex crimes, expanding the definition of “crimes against minors” to include sex abuse.

How Pope Francis continues to handle the legacy of sexual abuse in the Church could prove to be a foundational decision for the future of modern Catholicism. While he's been fairly revolutionary in his rhetoric, the child sex abuse epidemic, both ignored and blithely allowed to continue for decades, must rightly rank as the deepest moral stain that confronts his papacy.

Some Vatican officials have criticized the report — their UN observer called it "distorting," while an anonymous official condemned it as ideologically motivated and "spiteful" — responses which, broadcast outside the insular confines of the Vatican and its hierarchy, sound equal parts tone-deaf and disgraceful.

More like this
The Families Of Grenfell Tower Are Still Waiting For Justice, Five Years On
By Bustle UK
5 Ways To Stand In Solidarity With Women In America From The UK
By Sophie McEvoy
How To Fight For Reproductive Rights, Based On How Much Time You Have
By Courtney Young
Why You're Seeing Green Bandanas At Abortion Rights Protests
By Lexi Inks
Get Even More From Bustle — Sign Up For The Newsletter