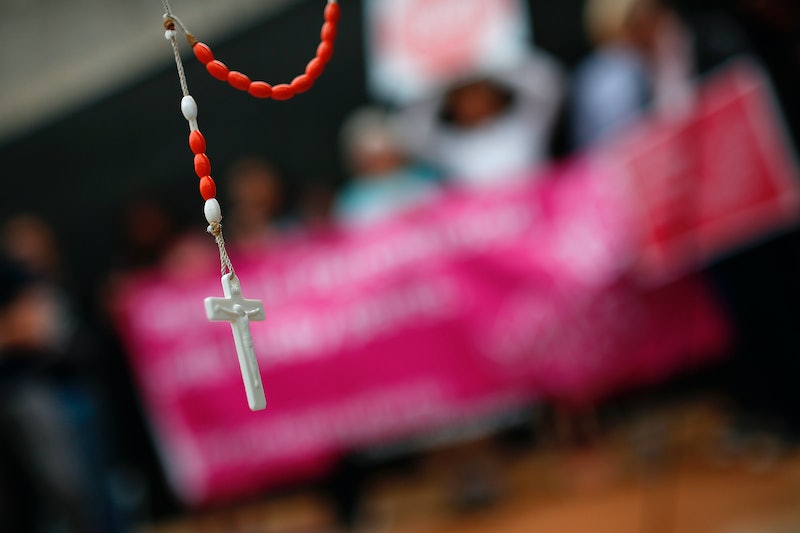 Pope Francis consistently impresses with his progressive stances on a variety of hot-button issues. He's preached love and tolerance when discussing being gay; he's spoken in favor of economic equity, more lenient immigration policies, and working to combat climate change. But as the controversy surrounding Planned Parenthood only continues to escalate, his disappointing stance on women's reproductive rights can't be overlooked simply because of his progressive approaches to other issues. On Friday, Alexander Sanger, grandson of Margaret Sanger and women's rights advocate, shared an important criticism of Pope Francis' perspective on abortion rights and family planning, printed by the International Business Times:

Despite Pope Francis' progressive stance on climate change and economic equity, he has taken a back seat when it comes to reproductive health and women's rights. The Pope and the Catholic Church must acknowledge the fact that 99 percent of Catholic women use contraception and have abortions at the same rate as other women. His pursuit to stifle contraception access reduces women to basic purveyors of biological materials and denies them the right to plan their own families. The Pope has to listen to what women want, and women all over the world want access to contraception.

While there's plenty to appreciate about the Pope's political activism, it's important that we listen to Sanger's message as well, with the reproductive rights of women increasingly under attack. Pope Francis' understanding of the role of contraceptives and abortions is no longer an accurate reflection of the modern lifestyles of the female members of his Church. As Sanger pointed out, the Pope should acknowledge this, and also be more receptive to the changing values and needs of women around the world, just as he is when it comes to the issues of climate change and poverty.

Sanger's criticism was a response to the Pope's recent speeches touching on abortion and family planning since his arrival in the United States. In his Thursday speech before Congress, Pope Francis expressed concern for family values, which, in his own words, are "threatened, perhaps as never before." According to the International Business Times, his words were possibly a subtle reference to abortion rights. The day before, on Wednesday, the Pope made an unannounced visit to a convent in Washington, D.C., meeting with a group of nuns suing the Obama administration over Obamacare's birth control mandates and presumably offering his support to their cause, according to Rev. Federico Lombardi, chief of the Holy See, in an interview with Vatican Radio.

Earlier this month, in what was undeniably a well-meaning gesture, Pope Francis encouraged priests to absolve women who confess to and seek forgiveness for "the sin of abortion" in the upcoming "Year of Mercy," but in doing so, really only added to the stigma surrounding abortion.

Pope Francis himself has criticized the Church's "[obsession]" with the issue of abortion, and taken progressive stances that are refreshing with the religious right increasingly propagating extremist ideas in America. However, as he continues to use his powerful influence in American politics to advance the idea that abortion and family planning are sins or simply fails to discuss women's rights at all, he can hardly be viewed as an ally to women. The Pope might be the spiritual leader of the Catholic Church, but if anything, this should serve as a reason for him to be more, rather than less, receptive to the needs of Catholic women. Before condemning contraceptives, as Sanger points out, he should understand that without access to them, women are essentially reduced to "basic purveyors of biological materials" with no autonomy over their own bodies.

Sanger's message to Pope Francis also served as a simple reminder that times have changed since the adaptation of the Church's stance against abortion rights, which is arguably the religious right's primary motivation in fighting Planned Parenthood. Sanger pointed out that today, Catholic women have abortions at the same rate as other women. Simultaneously, modern scientists are increasingly disputing the interpretation of the Bible that asserts that life begins at conception. This interpretation was a reflection of the values — and limited scientific knowledge — of society generations ago. Sanger's message encourages modern Church leaders to recognize that values grow and change over time, and that tradition doesn't always equate morality or what the best decision for modern women of all faiths is.

Ultimately, however, the Pope's stance isn't necessarily rooted in misogyny. The Church teaches against pre-marital and recreational sex for both men and women alike, and removing access to birth control and abortions arguably encourages this. But Sanger's criticism of the Pope correctly points out how eliminating the right to contraceptives and abortions affects women exponentially more than it does, men. Sanger's message is critical as it reminds everyone, not only the Pope and the Church, that we should listen to modern women and their needs before dismissing them in favor of arguably outdated interpretations of Scripture.